An analysis of Nationwide’s pet insurance claims reveals that dogs of brachycephalic breeds—those having a broad, short skull—are more often affected than other dogs are by many common conditions, even after excluding conditions related to brachycephaly.

Nationwide released the Brachy­cephalic Breed Disease Prevalence Study on March 8 at the Western Veterinary Conference in Las Vegas. The analysis excluded conditions related to brachycephaly such as brachycephalic obstructive airway syndrome, entropion, and keratoconjunctivitis sicca and excluded conditions unrelated to anatomy, such as accidents and infectious diseases.

Brachycephalic dogs were more likely than other dogs to have certain ophthalmologic issues: 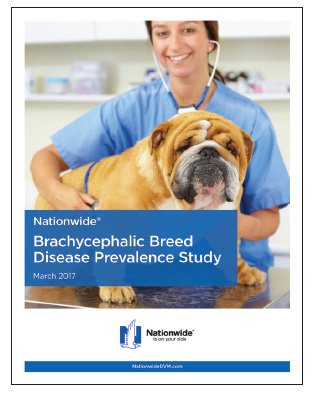 Brachycephalic dogs also were more likely than other dogs to have certain dermatologic issues, including the following:

According to the report summary: “By examining the issues of brachycephalic dogs from a different angle—analyzing common conditions, not brachycephalic-specific ones—Nationwide has expanded the field of inquiry and set a foundation for further study. In so doing, the company is assisting veterinarians, pet owners, breed associations and other stakeholders in the common goal of working together to improve the health of these popular dogs.”

The report is available here.