With the world’s population projected to grow by one-third to more than 9 billion people by 2050, global food production must increase as much as 70 percent to meet demand. Roughly 800 million men, women, and children already lack enough nutritious food to sustain a healthy and productive life, a condition the Food and Agriculture Organization describes as food insecurity.

Earlier this year, the AVMA convened a summit in Washington, D.C., to identify strategies for the Association to strengthen food security by promoting veterinary medicine and greater reliance on animal-source foods. More than a hundred people attended the AVMA Global Food Security Summit, held Feb. 9-11, including representatives from humanitarian and intergovernmental organizations involved with food development programs across the globe, such as the Bill and Melinda Gates Foundation, Heifer International, the World Organisation for Animal Health (OIE), and Veterinarians Without Borders.

The idea of hosting a summit dedicated to food security originated some two years ago with the AVMA Committee on International Veterinary Affairs, which formed an organizing committee to make the event a reality. The intent was to bring together individuals working in food security to brainstorm how the AVMA can support those efforts. The committee also wanted to assess whether a more visible commitment from the AVMA to food security would translate into tangible benefits for Association members and increase economic opportunities for U.S. veterinarians.

AVMA President Tom Meyer, in his address to summit attendees, spoke about the complexities of food security, which he said requires an integrated, coordinated, and collaborative approach among a diverse array of professions to achieve. “Although they may not be in unanimous agreement on the best way to feed the world, we cannot, and we must not, take our shared responsibilities lightly. That’s why collaboration and cooperation are such key components to what we do as individuals, as organizations, and as nations,” Dr. Meyer said. 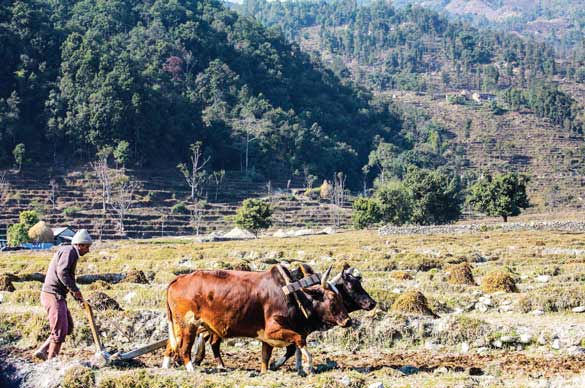 “My hope is that this summit will form new partnerships and reinforce existing relationships, and that collectively, we will strengthen our commitment to global food security,” Dr. Meyer continued. “Working together on these initiatives, we will build bridges across disciplines in the true spirit of one health … to protect and promote the health of both the animal and human members of our community.”

The summit format was designed to get at these issues through a mix of presentations, facilitated discussion, and networking. During the deliberative portions of the summit, attendees were tasked with three objectives: Define how eggs, milk, beef, and other animal-source foods strengthen global food security; describe how enhancing animal health and well-being contributes to a safe, sustainable, and nutritious food supply; and identify pathways to integrate veterinary expertise into current and future global food security programs.

The AVMA summit commenced with a presentation by Evan Fraser, PhD, director of the Food Institute at the University of Guelph and professor of geography at Guelph, where he is also the Canada Research Chair in Global Food Security. “I believe the issue of food security is one of those defining challenges that will shape the 21st century,” Dr. Fraser said, noting how the global spike in food prices in 2008 sparked riots around the world and even led to the Haitian government’s collapse.

An informed understanding concerning the challenges associated with feeding in excess of 9 billion people is necessary if the issue is to be addressed in a meaningful way, according to Dr. Fraser. Contrary to popular opinion, he said there is no evidence to support the premise that greater outputs in global food production will necessarily eliminate hunger. To support his theory, Dr. Fraser referenced United Nations data indicating the dietary calories available per day per person on the planet in 2015 was around 2,850.

A situation that exists when all people, at all times, have physical, social, and economic access to sufficient, safe, and nutritious food that meets their dietary needs and food preferences for an active and healthy life.

“There is more food now, per person, than in any time in history,” he said. “What we produce, how we produce it, distribution, waste, and, perhaps, global energy policy, are all more important than how much food we produce in determining if the next generation will be well-fed.”

Poverty and hunger are flip sides of the same coin. Not surprisingly, the majority of people experiencing food insecurity are in developing regions of the world. Most are rural farmers dependent on agriculture to eke out a living. Most government agencies and nongovernmental organizations believe the surest way of ending global poverty and hunger is through accelerated growth in the agriculture sector.

Dr. Samuel Thevasagayam, head of the Livestock Initiative within Agriculture Development for the Gates Foundation, insists animal agriculture must expand as well. Dr. Thevasagayam told summit attendees that animal-source foods contain particular nutrients necessary for a nutritious diet not as readily found in other food sources, nutrients such as vitamin A and zinc.

Veterinarians are essential for optimizing livestock production and productivity through disease control and prevention, Dr. Thevasagayam said. He noted the situation in sub-Saharan Africa where smallholder family farms are responsible for the bulk of livestock production. The Gates Foundation identified three preventable animal diseases in the region (Newcastle disease, infestation with gastrointestinal endoparasites, and infestation with ectoparasites) that cost smallholders more than $800 million annually.

“There’s such a leakage in the (production) system, and it’s important for us as veterinary professionals to block that leak and stop that wastage in order to work toward global food security,” he said.

Animal diseases are incredibly costly. A 2015 report by the National Research Council titled Critical Role of Animal Science Research in Food Security and Sustainability stated the collective price of six major zoonotic disease outbreaks that occurred between 1997 and 2009 was $80 billion. “During the last two decades, the greatest challenge facing animal health has been the lack of resources available to combat several emerging and reemerging infectious diseases,” according to the report.

Dr. Thevasagayam said demand for livestock products in sub-Saharan Africa, where an estimated 220 million people are undernourished, is expected to increase by roughly 150 percent over the next 30 years because of growth in population, income, and urbanization. Smallholders with the capacity to contribute additional eggs, meat, dairy, and poultry through enhanced livestock productivity, he said, are likely to experience higher incomes, improved nutrition and health, and financial security.

Later during the summit, human nutritionist Lora Iannotti, PhD, echoed Dr. Thevasagayam’s advocacy for animal-source foods, which she considers an essential component in programs aimed at alleviating hunger and nutritional deficiencies. Dr. Iannotti is an associate professor at Brown School of Social Work at Washington University in St. Louis and is currently engaged in development programs in Haiti, Ecuador, and East Africa.

The most prevalent health conditions associated with malnutrition are stunting, that is, reduced growth caused by chronic malnutrition related to poverty and infectious disease, and “hidden hunger” from a deficiency of vitamin A, zinc, or other essential micronutrients, Dr. Iannotti explained. Together, stunting and hidden hunger are responsible for 45 percent of deaths of children younger than 5 years old, she noted.

Dr. Iannotti has presented her nutrition research in resource-poor areas of Ecuador and Kenya, highlighting how she found that a diet including eggs or milk can greatly benefit early childhood development. “Over thousands of years, nature has perfected the nutritional composition of these foods and crafted them to sustain early life, completely. And as an added benefit, they’re economically affordable and environmentally sustainable,” she said.

Several summit speakers acknowledged the many consequences of expanding global food production, and veterinarians will be needed to work collaboratively with environmental scientists, physicians, agricultural economists, animal scientists, and others to address these challenges. For example, additional land and fresh water resources will be needed to accommodate new farms, generating higher outputs of agricultural waste and greenhouse gases. Deforestation will reduce already diminished habitats and likely increase contact between wild animals and people, an important point in light of the fact that more than 70 percent of all emerging diseases are zoonotic. There are also potential impacts on human health from using antimicrobials to treat even larger numbers of food animals. These challenges are not insurmountable, but will take a concentrated and cooperative approach to find new solutions and paths forward.

Attendee input from the facilitated discussion portions of the AVMA summit were recorded and will be incorporated into a report developed by the summit organizing committee, finalized by the Committee on International Veterinary Affairs, and presented to the AVMA Board of Directors later this year.

“This Global Food Summit is not the end of this,” said Dr. René Carlson, AVMA director of International Affairs and chair of the CIVA. “No, this is just the beginning.”