Findings from a recent study of owner-reported observations indicate dogs and cats engage in grieflike behavior after a companion animal in their home dies. 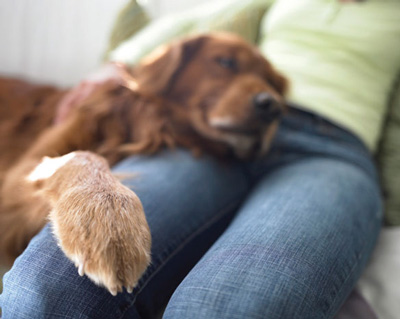 With funding from a Morris Animal Foundation grant, researchers surveyed 279 owners following the death of a pet. The questionnaire was distributed through veterinary clinics and several animal welfare organizations based in New Zealand and Australia. The two most common classes of behavioral change reported through the questionnaire were in affection behaviors and territory behaviors.

“Both dogs and cats were reported to demand more attention from their owners and/or display affiliative behavior, as well as spend time seeking out the deceased pet’s favorite spot,” according to the study, titled “Owners’ perceptions of their animal’s behavioural response to the loss of an animal companion,” which appeared Nov. 3, 2016, in the online, open-access journal Animals.

Dogs were reported to have decreased the amount of food and speed at which they ate, and to have increased the amount of time spent sleeping. Cats were reported to have increased the frequency and volume of their vocalizations. Researchers also looked at the practice of giving the surviving pet the opportunity to see the deceased pet’s body. The survey found no difference in behavioral responses between animals that saw the deceased pet and those that did not.

Authors of the study noted that there were limitations to interpretations of the study, particularly given the potential for anthropomorphism and owner bias, and that further investigations independent of owner interpretation are required. New investigations might help to establish whether the behavioral changes are a reflection of loss, a change in owner behavior following a loss, or the reduction in competition for owner attention and resources.