Veterinary technicians are adept at educating clients, but now they’re banding together to take on a greater task that requires informing the public and entire veterinary profession.

The National Association of Veterinary Technicians in America has two goals: Create a national standardized credential and establish a single title. The suggested term, although not finalized, is “registered veterinary nurse,” just as is used in the U.K. and Australia.

How many people ask you what you do when you give your title? I can’t tell you how many times I’ve explained that it’s like a nurse, and they reply, ‘Then why don’t you call yourselves that?’

The standardized term comes from the desire to have an accurate and recognizable professional title, Prendergast said. “How many people ask you what you do when you give your title?” she asked. “I can’t tell you how many times I’ve explained that it’s like a nurse, and they reply, ‘Then why don’t you call yourselves that?’” 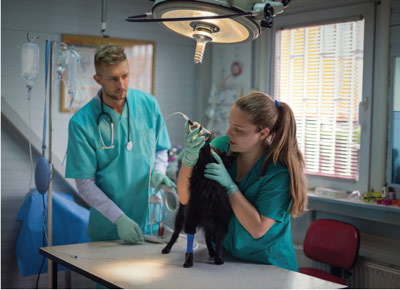 The 2016 NAVTA demographic survey also asked questions about a national standardized credential requirement. Ninety percent of respondents said it was important to them, and the same percentage agreed that a standard or same title was important. Fifty-four percent said they preferred veterinary nurse, 38 percent wanted veterinary technician, and 8 percent were undecided. Among those employed as veterinary technicians, 83.4 percent indicated being credentialed, while 11.6 percent are noncredentialed, and 3.5 percent identified as veterinary assistants.

In October, the association will send a different survey related to the proposed changes. The survey is intended to get feedback from the entire profession, including veterinarians, practice managers, and veterinary technicians and assistants, credentialed or not. It will be open for responses for a few months.

Yagi said, “As the national leader of veterinary technicians, we want to be able to say this is the direction we’re going, but we won’t do that until we get feedback on what everyone feels. That’s why we’re taking this year to really determine that.”

In addition, NAVTA is conducting webinars for veterinary technician leaders and for members of the veterinary profession so they may gain more information on the issues as well as learn about progress made to date.

Next year, the association hopes to start implementing the initiative to adopt a standardized credential and official terminology. As part of its efforts, NAVTA would like to harmonize the veterinary technician portions of the three model practice acts from the American Association of Veterinary State Boards, AVMA, and NAVTA.

Then, taking into consideration the positions of veterinary technician associations, VMAs, state legislators, and human nurses in each state, NAVTA will focus on the states most receptive toward amending their veterinary practice acts in defining the terminology, scope of practice, and more for veterinary technicians.

“Creating communication between the veterinary technician associations and VMAs and figuring out where we can coordinate discussion so we can have a united front at the state level for the practice act, education, and feedback will be important,” Prendergast said.“

Technician shortage may be a problem of turnover instead (Oct. 15, 2016)