The AVMA Committee on Veterinary Technician Education and Activities, at its April 21-24 meeting in Schaumburg, Illinois, withdrew accreditation from six programs on the basis of voluntary closure; all were located at for-profit institutions.

One of those veterinary technology programs was at Brown Mackie College in Michigan City, Indiana, but it likely won’t be the last from the system of more than 26 for-profit universities in 15 states. There are currently 13 Brown Mackie campuses with CVTEA-accredited programs, and 11 of those campuses are no longer admitting students.

This June, a spokesperson for the parent company of Brown Mackie, Education Management Corp., told the Consumerist that it plans to close 22 Brown Mackie College campuses. Officials of the for-profit college are promising teach-outs, through which students can finish their programs or receive assistance transferring to other programs while the college ceases new enrollments. Lack of interest in Brown Mackie College’s programs is behind the decision to shutter many of the for-profit institution’s campuses, according to an Education Management Corp. spokesperson quoted June 15 in Inside Higher Ed. 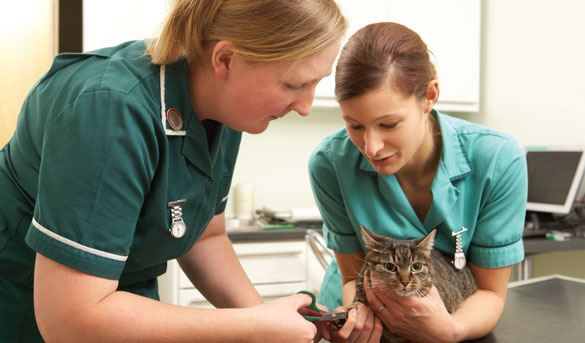 Another for-profit institution, the Globe Education Network, has three universities that currently have a total of 14 CVTEA-accredited programs—at Globe University, Minnesota School of Business, and Broadview University. Five other Globe Education Network veterinary technology programs had their accreditation withdrawn—again for voluntary closure—at the committee’s most recent meeting: Broadview University in Layton, Utah; Globe University in Green Bay and Middleton, Wisconsin; and the Minnesota School of Business in Lakeville and Elk River, Minnesota. In addition, Broadview University in Orem, Utah; Minnesota School of Business in Moorhead and Plymouth, Minnesota; and Brown Mackie College in Louisville, Kentucky, were placed on terminal accreditation, while Anthem College in Phoenix (also known as Pima Medical Institute-Phoenix) remains on continued terminal accreditation.

And finally, Sanford-Brown College, which has 18 campuses across the country, announced in August 2015 that it will cease enrolling students and close all its schools while undergoing a teach-out. The colleges are gradually discontinuing operations and programs; the process is expected to take anywhere from 18 months to three years. Because the college is closing physical locations, students who previously attended are eligible for loan forgiveness.

Sanford-Brown had 12 veterinary technology programs in eight states. Currently, four have been placed on terminal accreditation, and eight have already had their accreditation withdrawn.

The CVTEA has a process outlined for programs that voluntarily close. Specifically, they must place a moratorium on new enrollment. In addition, all standards must continue to be met during the closing phase of the program.

The closures give a glimpse into the problem with declining enrollment that some for-profit companies are facing, partly as a result of the challenging federal regulatory environment.

Education Management Corp. announced a $95.5 million settlement with the federal government this past November over questionable recruiting practices. The government claimed that EDMC violated a federal ban on paying recruiters on the basis of the number of students they enroll. The company, “operating essentially as a recruitment mill,” mistreated students at taxpayer expense, according to a Justice Department release.

The company also has set aside $103 million to cover student loan debt forgiveness as part of a separate deal with 39 states and the District of Columbia, which agreed to end investigations into similar allegations. About 80,000 students are eligible for loan relief. The break is only available for former students who enrolled between 2006 and 2014 and withdrew within 45 days of their first term.

The federal government took action last year with regulations that went in effect July 1, 2015. Now, to qualify for Title IV federal student financial aid programs such as Federal Direct and Perkins loans, the Education Department is requiring that degree-granting for-profits prepare students for “gainful employment in a recognized occupation.” A program would be considered to lead to gainful employment if the estimated annual loan payment of a typical graduate were not to exceed 8 percent of the graduate’s total earnings or 20 percent of discretionary income.

In addition, “gainful employment information” has been popping up on program websites, disclosing the total cost of the program, the median amount of loan debt for program graduates, on-time graduation rates, and the job placement rate for students who completed the program.

Meanwhile, the CVTEA has made changes to its Accreditation Policies and Procedures, which were released in July after being approved at the April meeting. The changes include the following:

At this time, Alaska, Montana, and the District of Columbia are the only states and district that do not have a CVTEA-accredited program.

For a list of veterinary technology programs accredited by the AVMA Committee on Veterinary Technician Education and Activities, visit here.