Powdered medical gloves could be banned

Powdered gloves intended for use in surgery or examinations could be banned to guard against inflammation, allergic reactions, and infections.

The ban also would apply to powders intended for use on such gloves. 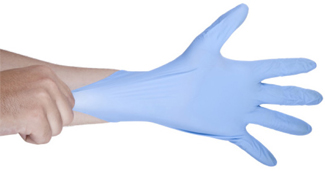 The Food and Drug Administration published this spring a proposal to ban powdered surgery and examination gloves and glove powder on the basis of risks that include health care worker and patient sensitization to natural rubber latex allergens that can bind to glove powder, surgical complications related to peritoneal adhesions, and inflammation from glove powder. These risks outweigh the minimal benefits of increasing ease of donning and removing the gloves, according to the agency.

Powdered glove use already has been in decline following reports of adverse reactions and risks as well as industry initiatives to improve safe use of nonpowdered gloves, FDA information states. Glove sales projections indicate at least 93 percent of medical providers use nonpowdered gloves, according to the agency.

In 1997, FDA officials examined the risks of powdered gloves and considered a ban but were concerned such a prohibition would cause a market shortage of medical gloves or push doctors toward glove chlorination, the most common alternative at the time for latex glove lubrication and a cause of damage to gloves when improperly performed. FDA officials gave the risks and benefits of powdered gloves more consideration starting in 2011 as a response to two citizen petitions that described risks of allergic reactions, irritation, and foreign body reactions, as well as the glove powder’s ability to carry endotoxin.