To titer or to revaccinate

When and why has it become more common for veterinarians to measure antibody titers when deciding whether to revaccinate cats and dogs?

An antibody titer is a measure of the concentration of antibodies in the blood, as determined by a test involving repeatedly diluting a blood sample and exposing those dilutions to an antigen. The shorthand is to refer to all measurements of antibody concentration as titers.

Dr. Richard Ford, emeritus professor of internal medicine at the North Carolina State University College of Veterinary Medicine, said factors inside and outside the profession are driving the increase in antibody titer testing.

In the late 1990s and early 2000s, the American Association of Feline Practitioners, AVMA, and American Animal Hospital Association released guidelines on vaccination suggesting that core vaccines have a longer duration of immunity than one year. The AAFP and AAHA guidelines recommended vaccinating every three years. Dr. Ford said many practices began measuring titers “to provide evidence to themselves that in fact the vaccinations are lasting longer than one year.”

The technology for measuring antibodies also has improved, he said. There are now affordable point-of-care test kits that provide useful information within 20 to 25 minutes. Dr. Ford said, “Two things loom, and I think every veterinarian should be aware of this. One, what is the indication for using the test? And, two, how do you interpret the test results?”

For all forms of antibody testing, it remains confusing and even controversial whether the results are a good measure of immunity.

According to the AAHA guidelines, antibody testing is useful for monitoring immunity to certain viruses in dogs. The AAFP guidelines recommend defined revaccination intervals for cats. Guidelines from the World Small Animal Veterinary Association favor antibody testing for determining duration of immunity of core vaccines in dogs. But the current AVMA “Vaccination Principles” sound a cautionary note.

According to the AVMA principles: “When serological titers are used to help determine the vaccination/protection status of an animal, veterinarians should make sure these data have been clinically correlated to host-animal protection studies for the specific diseases and species being tested. For most common vaccine antigens, the correlation between serological response to vaccination, long-term serostatus, and protection in the host animal has not been adequately established. The lack of these data often precludes practitioner’s ability to make well-informed vaccination decisions based on serostatus alone.”

Dr. Laurel Gershwin, a professor who teaches immunology at the University of California-Davis School of Veterinary Medicine, represents immunology on the AVMA Council on Biologic and Therapeutic Agents, which has oversight of the “Vaccination Principles.” The principles don’t make recommendations on specific vaccines or specific vaccination intervals, but Dr. Gershwin said there are good data that immunity from core vaccines in cats and dogs should last for three years.

“For those clients that are reticent about not having a distemper vaccine every single year, for example, those are a great indication to go ahead and do a titer,” she said. “Having said that, when we measure antibody, antibody is only part of the equation.” 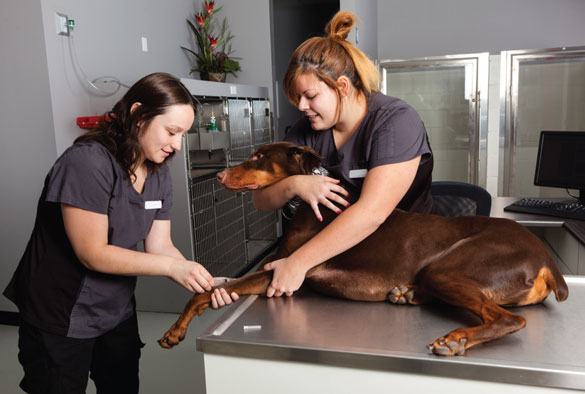 A cat or dog could respond to a vaccine with a strong cell-mediated immune response, which is difficult to measure outside a research setting. She said, “Even if you have a titer that is less than what is considered acceptable, that doesn’t necessarily mean that the pet would get sick if he or she were challenged with just the street virus, walking down the road and sniffing noses with a dog that was infected, for example. But, obviously, one would want to boost those.”

Titer testing is a good idea for some cats and dogs, Dr. Gershwin believes. These include animals that have a history of or genetic predisposition to poor responsiveness to a vaccine, that have an allergic reaction to or other adverse effect from a vaccine, or that have immunosuppression.

The AAHA Canine Vaccination Guidelines state that “despite the confusion and controversy surrounding antibody testing,” the testing is useful for monitoring immunity to canine distemper virus, canine parvovirus type 2, canine adenovirus type 1, and rabies virus. The guidelines note, “Some clients are now having titers performed for CDV and CPV-2 in lieu of revaccinating.”

I get the impression that some veterinarians are just not doing any vaccinations until the titer falls into the negative threshold level, and then they boost. So that might mean some dogs or cats will go on for multiple years without needing a vaccination. Some develop excellent levels of antibody that are sustained virtually for their lives following the initial vaccination series. And others don’t seem to sustain them that well.

Dr. Ford of North Carolina State University, an author of the AAHA and AAFP guidelines on vaccination, said point-of-care test kits that correspond well to gold-standard titer testing are available for canine distemper virus, canine parvovirus, and canine adenovirus as well as the parvovirus that causes feline panleukopenia.

The test kits have a variety of applications, he said. Animal shelters could do titers during animal intake or during an outbreak to help control disease without euthanasia. A veterinarian might finish the vaccination series for a puppy, then test whether the dog has been immunized before starting puppy socialization or doggy day care.

More clients are asking whether booster vaccines are necessary, Dr. Ford said, and the cost has come down for titer testing. He said, “I get the impression that some veterinarians are just not doing any vaccinations until the titer falls into the negative threshold level, and then they boost. So that might mean some dogs or cats will go on for multiple years without needing a vaccination. Some develop excellent levels of antibody that are sustained virtually for their lives following the initial vaccination series. And others don’t seem to sustain them that well.”

For titer tests as with all tests, Dr. Ford added, practitioners should consider data on the likelihood of false-positive and false-negative results.

According to the report, most cats that have a positive result on a titer test for feline panleukopenia are immune to the disease. Titers for feline herpesvirus-1 and feline calicivirus “may not necessarily correlate well with protective immunity and should not be used to predict protection in the future.” Titers for feline leukemia virus and feline immunodeficiency virus “do not correlate with immunity and should not be used to determine the need for vaccination.”

Shila Nordone, who holds a doctorate in immunology and was an author on the report, said, “We have yet to determine the role of cell-mediated immunity in protection of the cat long term against specific diseases post-immunization. Antibody titers do correlate with protection but are by no means indicative of absolute protection.”

Vaccine formulations vary quite a bit, Dr. Nordone said. The AAFP recommends boostering when protection is likely to begin waning, about halfway through the expected duration of immunity.

She concluded, “My bias, as an immunologist, is to avoid overimmunization and follow recommendations in order to maintain full protection.”

The Canine Vaccination Guidelines within the WSAVA Guidelines for the Vaccination of Dogs and Cats state that, while antibody testing still can be relatively expensive, “The principles of ‘evidence-based veterinary medicine’ suggest that testing for antibody status (for either puppies or adult dogs) should be better practice than simply administering a vaccine booster on the basis that this would be ‘safe and cost less.’”

Some dogs maintain antibodies for their entire lives to canine distemper, canine parvovirus, and canine adenovirus, said Dr. Ronald D. Schultz, professor of immunology and founding chair of the Department of Pathobiological Sciences at the University of Wisconsin-Madison School of Veterinary Medicine and an author of the WSAVA and AAHA guidelines.

In his controlled studies, he has found that dogs maintain immunity to CDV, CPV-2, and CAV seven to nine years after vaccination, as proved by protection against virulent challenge. He said, “The presence of active antibody response to these viruses is a clear indication of protection. There is no confusion on this point.”

“We can use titers to know whether or not the animal does need to be revaccinated, or we can simply go on a schedule and just revaccinate,” he said. While few practitioners would have thought of doing titers 10 years ago, he sees more and more titer testing today. He said, “Dr. Laurie Larson in my laboratory is running thousands of gold-standard titer tests per year, and the push is coming from owners who wish to avoid unnecessary booster vaccination.”

Dr. Schultz emphasized, “This is something that the owners just need to recognize: how important those core vaccines are. Every puppy and every kitten should receive them. Antibody testing assures us that the dog or cat is actually protected by the vaccine, or not, and is a very useful tool for every small animal practitioner. This is the only practical method to be certain the animal has developed an immune response to a given core vaccine.”

Dr. Gershwin of the AVMA Council on Biologic and Therapeutic Agents concluded, “Pet owners need to work with their veterinarians to determine the best schedule of immunizations for their pet. This will be dependent upon individual situations, such as allergic reactivity and factors such as being on an immunosuppressive drug.”

What exactly is an antibody titer?

In brief: An antibody titer is a measurement of the concentration of antibodies in the blood, as determined by a test involving repeatedly diluting a blood sample and exposing those dilutions to an antigen.

Dr. Laurel Gershwin, who teaches immunology at the University of California-Davis, added: “The last dilution of the patient’s serum that produces the positive endpoint—this will differ depending upon the type of assay—is used to determine the titer. Hence, the more you can dilute the serum and get the appropriate endpoint reaction, the more antibody there is.”