Inside the headquarters for military dogs

Training of military working dogs wraps up by early afternoon at Lackland Air Force Base in San Antonio as the temperature rises, and it’s mostly quiet inside the cool halls of the LTC Daniel E. Holland Military Working Dog Hospital.

Signs announce that the next day is Spot Day, though. Once a month, every dog on the base comes through the hospital for a check of weight, body condition, and diet and to receive preventives against heartworms, fleas, and ticks. The parade of dogs brings in more than 600 that are housed on one side of the hospital and about 200 housed on the other. 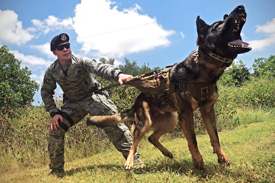 In many senses, Lackland Air Force Base is the headquarters for U.S. military dogs. The Air Force is the executive agent for almost all Department of Defense working dogs. Lackland breeds some of the dogs, buys others, and prepares and trains most of them for duty.

The Military Working Dog Veterinary Service, part of the Army Veterinary Corps, not only treats dogs on the base but also serves as the hub for veterinary care for all military working dogs, providing worldwide consulting and referral services.

At the Holland Military Working Dog Hospital, dogs from bases around the globe rest calmly in crates recovering from surgery before going into wards. In contrast, dogs in the kennel off the rehabilitation area bark excitedly whenever someone walks through.

About 85 percent of the dogs that enter U.S. military service originate from overseas, primarily from Eastern Europe, said Stewart Hilliard, PhD, a civilian psychologist who leads dog evaluation and breeding at Lackland. Buying dogs from abroad, whether through a U.S. or foreign vendor, is currently less expensive than breeding dogs or buying dogs bred in the United States.

Dr. Hilliard said working dogs seem like an anachronistic concept. “It turns out that dogs have never been more important than they are now,” he said. In particular, he added, “Dogs are the single most effective and cost-effective countermeasure helping us to detect and locate explosives of all kinds.”

Teams from Lackland purchase dogs overseas about four times a year and make several trips stateside a year. Dr. Hilliard said that before purchasing, his staff “administers behavioral tests to dogs to decide if they have the proper character and temperament and behavior to be effective working dogs.” Veterinarians on each team do a health inspection.

Among the challenges of buying overseas, Eastern Europe is becoming increas­­ingly unstable, Dr. Hilliard said. And there are indications that dogs in the region are displaying a higher incidence of hip dysplasia and other skeletal abnormalities. Also, competition for the dogs from nations around the world is more intense.

The breeding program at Lackland began in 1998 with Dr. Hilliard at its head. He was a dog breeder and trainer before becoming a psychologist, adding academic training in behavior to his practical experience. He said the breeding program at Lackland is the most challenging thing he’s done. He has found that it is not uncommon to breed two high-quality dogs and produce puppies that are all better suited to be family pets than “soldier dogs.”

Nevertheless, the program is establishing bloodlines. It has begun relying more on artificial reproduction and has only one standing male but 24 to 25 breeding females. Through frozen semen, the program has access to 15 to 20 males, some long dead.

The training program at Lackland involves much more than obstacle courses and bite suits. A row of simulation airplanes borders a simulation parking lot. A train car sits among buildings housing mock-ups of various scenarios.

Although the exact number varies, Dr. Hilliard said the training program produces about 270 military working dogs per year. Almost all are dual-purpose detection and patrol dogs, detecting either explosives or narcotics. Most are German Shepherds, but some are Belgian Shepherds, with the latter almost exclusively Malinois.

Some dogs are detection-only, and these can be sporting dogs such as retrievers and pointers. The Transportation Security Administration also trains detection dogs at Lackland, using a variety of breeds but mostly nonthreatening sporting dogs such as black Labrador Retrievers. The Navy sometimes uses terriers for detection because the small dogs are good for close quarters.

Dogs require preparation before entering the training program. Col. Cheryl Sofaly, the veterinarian who directs the Military Working Dog Veterinary Service, said puppies born on the base are monitored closely. After weaning, they go out to foster care with members of the community, returning to the base for checkups and behavioral work.

In foster care, the puppies are able to have normal dog experiences. They encounter people and traffic, parks and stores. So the puppies are used to going anywhere, Dr. Sofaly said. Dr. Hilliard added later, “These seemingly mundane experiences are crucial to the development of well-adjusted working dogs, and the foster care method is an ideal and inexpensive method to provide such socialization.”

Formal training starts at 7 months. At 1 year of age, the dogs are evaluated by Dr. Hilliard’s team for the training program. Foster families or others can adopt dogs that don’t make the cut.

Dogs not bred at Lackland are bought between the ages of 1 and 3. They spend two to four months in the kennels being made ready for the training course.

Before dogs start training, veterinarians routinely perform a gastropexy. The dogs are susceptible to gastric dilatation-volvulus because of breed and temperament. Dr. Sofaly said the procedure has been very successful at preventing GDV.

The training course itself is 120 days long, with 60 days for detection and 60 for patrol. Dr. Hilliard said the program integrates modern methods of positive reinforcement and signaling techniques with more traditional methods of aversive control.

Dr. Hilliard’s team measures the performance of dogs at the end of the course to assess whether they have absorbed the lessons and developed the skills they need to go out into the field. Dogs that don’t make the cut are assessed for adoption.

“As an Army vet, this is really an amazing place to work,” said Dr. Sofaly, a diplomate of the American College of Veterinary Internal Medicine. “It’s the only hospital like it within the Department of Defense.”

Radiology probably gets the bulk of the consulting requests, Dr. Sofaly said. Military bases around the world can perform CT or MRI scans on dogs. Common problems include lumbosacral disease and other athletic injuries. The dogs that come to the hospital from outside Lackland usually come for specialty surgery.

The hospital veterinarians are proud of quickly adopting a standardized anesthesia protocol developed by a veterinary anesthesiologist with the Army Reserve, Dr. Sofaly said. All veterinarians in the Army Veterinary Corps are expected to use the protocol.

Whenever a dog has a health problem, Dr. Sofaly said, “If we can fix the problem, and the dog can go back to service, that’s the first choice.” Sometimes the problem can’t be fixed well enough for the dog to go back to service. She said, “Those dogs would basically be medically evaluated for retirement, and then they would be made available for adoption.”

The hospital has four wards plus a bathing area. An upcoming construction project is to build another kennel bank. The hospital also has its own laboratory for routine tests. Fort Sam Houston, also located in San Antonio, does other testing, such as for Chagas disease and rabies antibodies.

In addition to Spot Day, dogs housed on the base have a twice-yearly examination, with bloodwork once a year. Heatstroke is rare despite the hot climate. Dog handlers manage the times of day and length of training, and the veterinarians teach handlers to watch for signs that a dog is overheating.

The Air Force has an adoption coordinator for military dogs up for retirement as well as for dogs that don’t make the cut before or after training.

“There always comes a time where maybe the dog is not as effective as they used to be,” Dr. Sofaly said. Perhaps the dog is developing arthritis. Then it’s time to consider retirement.

Each dog is given a prognosis for adoption, primarily based on behavior. Despite being trained for patrol functions including controlled aggression, retired military dogs often make good pets. Dr. Sofaly said, “By the time they are a senior citizen dog, they know when they’re working, and they know when they’re not working.”

Dr. Hilliard added later that the modern model for U.S. military working dogs is not to breed or procure aggressive or hostile dogs for service but to choose animals that are balanced, confident, and even friendly with handlers and strangers. He said, “The majority of these dogs can make a smooth and safe transition to civilian life.”

The Department of Defense began the retirement program in 2000. In previous decades, many military dogs were euthanized at the end of their working careers, but now, very few are euthanized—and then almost always because of irreversible medical conditions.

Dr. Sofaly has a retired military dog herself. She said, “It’s nice to take an older dog that has worked really hard and done its time and bring them into a home environment. And then really once they settle in, they just become part of the family.”

In a crate nearby, a black Lab up for retirement wags friendlily.

The AVMA Convention 2016, Aug. 5-9 in San Antonio, will feature sessions relating to military working dogs. A daylong walking tour at Lackland Air Force Base highlights the breeding, training, and veterinary care of these dogs. Other sessions are “The Role and Medical Management of Military Working Dogs in Combat” and “Canine Post-Traumatic Stress Disorder in Military Working Dogs.” Registration for the convention and the walking tour is at www.avmaconvention.org.