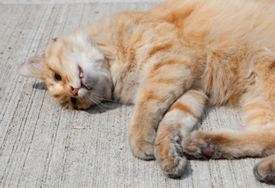 Four cats in Indiana have been sickened by a canine influenza virus that caused an outbreak among dogs in Chicago and spread throughout the U.S. during 2015.

Diagnostic tests found that cats in a northwestern Indiana animal shelter were positive for an H3N2 canine influenza virus that had sickened dogs in the same shelter, according to information from the University of Wisconsin-Madison School of Veterinary Medicine. Clinical signs in the cats included runny noses, congestion, malaise, excessive salivation, and “lip smacking” behavior.

The infected cats and dogs were quarantined while shedding the virus. The university announcement indicates the virus appeared to spread between cats, with subsequent diagnostic tests showing increases in viral loads.

Infected dogs can develop a persistent cough, runny nose, and fever, and the virus has been connected with some dog deaths.

Cats in South Korea also have been sickened by the virus, but only one cat in the U.S. had a positive test for H3N2 infection prior to the four discovered in Indiana, university information states. Information from Cornell University indicates the H3N2 virus is descended from an avian influenza strain. It was first identified in southern China and South Korea.