The AVMA has revised its policy on “Free-roaming Abandoned and Feral Cats” to encourage collaboration among veterinarians, humane groups, and wildlife conservation entities “to reduce the number of free-roaming abandoned and feral cats in a humane and ethical manner.” 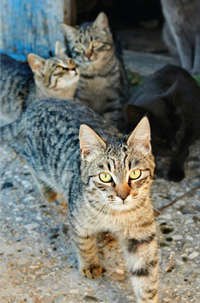 More specifically, the policy “encourages collaborative efforts to identify humane and effective alternatives to the destruction of healthy cats for animal control purposes, while minimizing their negative impact on native wildlife and public health.”

The AVMA House of Delegates adopted revisions to the policy during its regular winter session, Jan. 9 in Chicago, after debating two contentious points regarding managed colonies of free-roaming cats. The first is the addition of a statement that the AVMA does not oppose euthanasia for colonies not achieving attrition and posing active threats to the area. The second is the absence of mention of enclosures for management of colonies.

At end, delegates voted 94.2 percent to 5.8 percent to adopt the new policy.

The AVMA Animal Welfare Committee reviewed the policy on free-roaming cats in accordance with the five-year review cycle. According to background, the committee “believed the policy could be revised to reflect new information, help build consensus, and provide leadership per the management of free-roaming unowned cats.”

The committee collaborated with the AVMA Committee on Environmental Issues and the AVMA Council on Public Health and Regulatory Veterinary Medicine over a period of two years to update the policy.

According to a statement that the AVMA posted on the AVMA@Work blog after the House adopted the revisions, the policy resulted from “a careful review of the available data in the literature; recounts of practical experience with the management of cat colonies on the part of several individuals on more than one entity (experience that brought forward multiple perspectives); consideration of a range of AVMA member comments received from around the country; collaboration with stakeholder groups; and intense negotiations with multiple rewrites involving a great deal of give-and-take and compromise.”

The first section states that public education is critical in the following areas: “the risks posed by free-roaming abandoned and feral cats, prevention through the responsible care of privately owned cats, and various management approaches directed toward existing abandoned and feral cat populations.” The section lists specific educational elements.

According to the section on ordinances: “The AVMA strongly supports reducing and controlling the number of free-roaming abandoned and feral cats through humane capture by local health departments, humane societies, and animal control agencies. Free-roaming abandoned and feral cats that are not in properly managed colonies should be removed from their environment and treated in the same manner as other abandoned and stray animals in accordance with local and state ordinances.” The section provides recommendations for provisions of ordinances.

The AVMA recognizes that multiple

approaches have been suggested to

reduce the population of free-roaming

there is no single solution that

effectively addresses all aspects of

the problem in every situation.

From the AVMA policy on “Free-roaming Abandoned and Feral Cats”

According to the next section: “AVMA encourages the use of non-lethal strategies as the initial focus for control of free-roaming abandoned and feral cat populations. Public, private, and not-for-profit humane organizations and individuals must make every effort to promote adoption of acceptable unowned cats and implement sterilization programs.” The section offers suggestions to improve control of free-roaming cats and a paragraph on managed colonies.

The final section encourages research on a number of subjects, such as “to determine efficacy of current models and development of new methods for management of free-roaming abandoned and feral cats.”

According to the introduction to the policy: “The AVMA recognizes that multiple approaches have been suggested to reduce the population of free-roaming abandoned and feral cats. Currently there is no single solution that effectively addresses all aspects of the problem in every situation. Any interventions to manage the problem of free-roaming abandoned and feral cats should be well thought out, with consideration given to the welfare of the cats and wildlife themselves, the ecosystem in which the intervention will be conducted, the expertise and abilities of those implementing the intervention, societal and cultural attitudes, and public health.”

According to the AVMA statement on the policy: “Great efforts were made to represent the diverse viewpoints related to the management of free-roaming abandoned and feral cats, while maintaining scientific credibility and a policy that provides valuable and practical information for AVMA members and the public.”

The policy includes the following paragraph regarding managed colonies: “The AVMA recognizes that managed colonies are controversial. However, properly managed programs can improve quality of life for these cats through better nutrition, vaccination to prevent disease, spaying and neutering to reduce unwanted litters, euthanasia of sick and debilitated cats, and adoption of healthy kittens. The goal of colony management should be continual reduction and eventual elimination of the colony through attrition. Appropriately managed colonies also have the potential to significantly decrease risk to public health, wildlife, and ecosystems. For colonies not achieving attrition and posing active threats to the area in which they are residing, the AVMA does not oppose the consideration of euthanasia when conducted by qualified personnel, using appropriate humane methods as described in the AVMA Guidelines for the Euthanasia of Animals.”

During the regular winter session of the House of Delegates, the American Association of Feline Practitioners proposed deleting the statement that the AVMA does not oppose euthanasia for colonies not achieving attrition and posing active threats.

The previous version of the policy did not mention euthanasia, but the AVMA policy on “Euthanasia of Animals That Are Unwanted or Unfit for Adoption” states, “The AVMA is not opposed to the euthanasia of unwanted animals or those unfit for adoption, when conducted by qualified personnel, using appropriate humane methods as described in the AVMA Guidelines on Euthanasia.”

The House reference committee that reviewed the proposed revisions to the policy on free-roaming cats recommended deleting the statement about euthanasia.

Dr. Dick Sullivan, California delegate and a member of the reference committee, noted on the House floor that the committee vote was very close. Backing the minority opinion, he said, “I believe this sentence is very well thought out and states our position very well.”

Dr. Link Welborn, delegate for the American Animal Hospital Association, said AAHA supported deletion. He said AAHA would be supportive of including the statement only “if the science was firmly behind euthanasia as a last resort being effective at decreasing feral cat populations.”

Dr. Cheryl Greenacre, alternate delegate for the Association of Avian Veterinarians, said she supported the statement as providing a choice for colonies not achieving attrition. Dr. Jim Brett, Mississippi delegate, said the policy had been wordsmithed for two years. He said the AVMA should say what it means.

Dr. Bob Groskin, AAV delegate, said he can envision the following scenario. A mayor faces citizens complaining about colonies where cats are multiplying rapidly. “He will look to us as experts in the field. He needs a document that allows him to say to them, ‘These are some of the options that we have,’” Dr. Groskin said. He said removing the statement about euthanasia would remove it as an option.

Dr. Cathy Lund, Rhode Island alternate delegate and a feline practitioner, said deleting the statement would prevent the perception that veterinarians are advocating euthanasia of healthy cats. She asked, “How can we say this cat matters, but that cat doesn’t?”

The delegates voted 79 percent to 21 percent not to delete the statement.

During the House session, the Association of Avian Veterinarians proposed an amendment to add the following paragraph to the policy: “The AVMA supports the use of properly designed and appropriately maintained enclosures for the management of cat colonies. Such a management strategy mitigates the risk to human health, wildlife morbidity and mortality, and allows for the improved welfare and responsible care of the cats.”

Dr. Groskin, delegate for the Association of Avian Veterinarians, said on the House floor that the AAV wants the AVMA to support the option of enclosed facilities. Enclosed sanctuaries already have begun to develop, he said. He continued, “Enclosed colonies are an efficient solution that promotes responsible care for the cats, communities, and the environment.”

The House reference committee that reviewed the policy recommended not adding the paragraph on enclosures. Dr. Kate Knutson, AAHA alternate delegate, said during the committee meeting that the cost would be untenable to maintain enclosures for millions of free-roaming cats.

Dr. Tom Meyer, AVMA president-elect, acting as chair of the House, ruled that the amendment to add the paragraph on enclosures was out of scope. The delegates voted 76.3 percent to 23.7 percent not to consider the amendment.

The AVMA policy on “Free-roaming
Abandoned and Feral Cats” is here.