Dr. Vince Baker was walking briskly toward one of the barns at Santa Anita Park in Arcadia, California, to treat a horse when he accidentally kicked a woman who was at the track with her husband and kids. He apologized, then realized it was actress Julia Roberts. Earlier, he had seen a member of the rock band U2. Every day for weeks last summer, limos would pull up to the racetrack, and people would pour out. Eventually, 24-hour security had to be put in place. 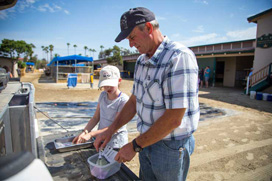 “It was neat and very exciting, but then you start to think, every year there’s someone who wins the World Series or NBA Championship. There hasn’t been a Triple Crown winner in 37 years. And you think, ‘That was an impressive, incredible event that just happened,’” said Dr. Baker, owner of the Equine Medical Center in Cypress, California.

“It was an experience I hope I get to see again. Thirty-seven years was a long time, and is it going to take that long to do it again? We don’t know.”

But American Pharoah’s fairy tale ending could just as easily have not happened if not for a crucial decision by Baffert and Dr. Baker. In 2014, after running poorly in his track debut as a 2-year-old, American Pharoah won his next two races, the Grade 1 Del Mar Futurity and FrontRunner Stakes, each by several lengths. He was the favorite going into the Breeders’ Cup Juvenile, which had a $2 million purse, but injured himself in his last workout before the race.

Dr. Baker said, “He had an injury that you probably could have treated and ran him, but my and Bob’s viewpoints or feelings for horses are that you’re never going for a race, but for a career. For him and I to decide that the Breeders’ Cup is just one race ... He did the right thing, and scratched the horse. He did what he was supposed to do and did the diagnostics, and hence, American Pharoah had an incredible career. He retired completely sound. That’s a good lesson for everybody to learn. Everyone gets greedy or wants to win a race, but it’s not about the race. It’s about a career.”

Trainers, owners, and jockeys get much of the attention, but veterinarians are arguably just as important for a winning horse. Dr. Baker now is one of the few who can say he’s cared for a Triple Crown winner. The oldest surviving member on that short list is Dr. William R. McGee, who celebrates his 99th birthday in February. The retired equine veterinarian was the first intern at Hagyard & Hagyard—now known as Hagyard Equine Medical Institute—in Lexington, Kentucky.

During the late 19th and early 20th centuries, the influx of new wealth from Northeastern industrialists allowed Lexington to gain greater stature as a Thoroughbred center, according to the Kentucky VMA’s history of the Hagyard practice. Hagyard & Hagyard veterinarians were charged with the care of these horses and were instrumental in the development of Lexington as the Horse Capital of the World.

Dr. McGee was 23 when he moved to Kentucky after receiving his DVM degree from Washington State University in 1940, the year before Whirlaway won the Triple Crown. He often worked with Dr. Charles E. “Doc Charlie” Hagyard, who practiced from 1924 to the 1960s and cared for four Triple Crown winners, including War Admiral, and was Man o’ War’s veterinarian. In fact, Dr. McGee and Doc Charlie advised Man o’ War’s owner, Samuel D. Riddle, to retire the horse from stud duty after the horse suffered a heart attack. A year earlier, Dr. McGee had had the horse’s casket made, and in 1947, he spoke at his funeral. Dr. McGee, an expert in equine reproduction, worked with seven Triple Crown winners in their post-racing careers as studs.

Even beyond the honor of treating some of racing’s greatest athletes, Dr. McGee has made a name for himself.

Dr. McGee and Dr. A. Gary Lavin are said to have performed the first successful cesarean section on a horse in 1963.

“All we had was chloral hydrate for her, and did it in a stall and got the foal out, and she survived, and got back in foal which makes it a success,” even though the first foal died, said Dr. McGee in a 2001 interview for the Horse Industry in Kentucky Oral History Project.

While he was president of the American Association of Equine Practitioners, the association published a four-point position paper in December 1963 pertaining to the medication of racehorses in training. The paper was “intended to serve as a starting point ... to solve a very serious problem to each of us as veterinarians and to the racing industry at large.” The four points were as follows:

Dr. McGee became a partner at Hagyard & Hagyard in 1947, and the practice was renamed in 1951 as Hagyard-Davidson-McGee Associates. Today, the practice’s McGee Medicine Center and McGee Fertility Center are named in his honor. Dr. McGee retired at 68 and splits his time between Kentucky and Florida.

About a week after American Pharoah’s historic Triple Crown win last June at the Belmont Stakes, Dr. McGee had a chance to meet the Thoroughbred at Churchill Downs in Louisville, Kentucky, thanks to Hagyard staff.

He told JAVMA that it was an honor and a pleasure to meet American Pharoah and that he thought trainer Bob Baffert, owner Ahmed Zayat, and the caretakers deserve much credit for the horse’s great success.

“As far as an individual goes, he’s got the temperament, and the ability, he’s just got everything you like to see in a horse—very durable—and I just wish him the best of luck down the road,” Dr. McGee was quoted by ESPN as saying that day at Churchill Downs.

Once in a lifetime?

“He was an incredible horse to be around,” Dr. Baker said. “You and I could go in the stall and he’d probably lay next to us and rest his head on your lap. He was all business on the track but just a laid-back individual in the stall.”

American Pharoah is a very sound horse conformationally and had an incredible stride. The rest is history.”
Dr. Vince Baker,
American Pharoah’s veterinarian
Dr. Baker, a 1987 graduate of Ross University, began his career working with Quarter Horses and doing part-time farm work; he didn’t start working full time with Thoroughbreds until around 1989 when trainer D. Wayne Lukas asked him to care for his horses, which later led to his work with Baffert.

“Bob has proven himself with the number of horses he’s purchased to the number of champions he’s had. He’s born with the ability to pick out a good horse,” Dr. Baker said. “I’ve known Bob for a long time. Obviously he didn’t just pick me; my father (Dr. Bart Baker) did his work at Los Alamitos. I had the in, though Bob could have changed at any moment but kept me around.”

For the past decade or so, Lukas, Baffert, or both had horses in the Kentucky Derby every year, and Dr. Baker would go each time. Each trainer has just missed claiming the Triple Crown. Charismatic won the Derby and Preakness for Lukas in 1999. Five of Baffert’s horses—Silver Charm, Real Quiet, Charismatic, War Emblem, and Point Given—won two of the three legs of the Triple Crown.

“There were quite a few where there were close calls but not close enough, I guess,” Dr. Baker said.

American Pharoah began 2015 with wins in the Rebel Stakes and Arkansas Derby, then went on to win the Kentucky Derby on May 2, finishing a length ahead of runner-up Firing Line. Two weeks later, he handily won the Preakness Stakes despite a No. 1 post position and a downpour.

“His stride length, when you watch his races in slow motion, his scapula—when he reaches—is almost parallel to the ground. His reach was incredible,” Dr. Baker said. “It didn’t matter the surface. When he won the Preakness, it was pouring rain on a sloppy track. When he came into the three-eighths–mile pole, his ears went forward, and he was like, ‘Hey, this is fun,’ and won by seven or eight lengths.”

Dr. Baker recalls being gut-wrenched by the time the Belmont Stakes arrived. He watched the race at home with his wife.

“She had tears in her eyes, and I’m yelling and screaming, getting choked up. It’s that feeling that I know I’m still passionate about the sport,” he said.

Three weeks after winning the Triple Crown, American Pharoah finished a close second at the Travers Stakes at Saratoga Race Course on Aug. 29, snapping a winning streak of eight races.

Dr. Baker remembers after that race, “Bob said, ‘I didn’t train him.’ He likes to train lights out. You’ve seen a good racehorse. They are the ones out there smiling when training. They love to exert themselves. They do everything not at 90 percent; they give 120 percent all the time.”

And, indeed, he was, further cementing his place in history Oct. 31 as the first horse to win the grand slam of American horse racing.

American Pharoah ended his career with nine victories in 11 starts, earning $8.65 million. His 3-year-old season never included a stint at home at Santa Anita, the colt flying out to compete at seven tracks.

Typically, he received furosemide before each race, “but probably didn’t need it,” Dr. Baker said. The horse received a dose of polysulfated glyco­saminoglycans with his weekly medication, along with vaccinations and worming medication.

“He didn’t need much. He was a very healthy horse. The old saying ‘A good horse is dangerous in anyone’s hands’ is true. Bob did a good job managing him, and he definitely deserves the credit he’s received so far,” Dr. Baker said. “(American Pharoah is) a very sound horse conformationally and had an incredible stride. The rest is history.”

Dr. Benjamin B. Stivers of Hagyard now cares for American Pharoah as he resides at Ashford Stud in Versailles, Kentucky.

To hear the full interview the University of Kentucky Libraries’ Louie B. Nunn Center for Oral History conducted with Dr. William McGee on what it was like to practice veterinary medicine in mid-century Lexington, Kentucky, click here.

To watch a compilation of the three races American Pharoah won to take the Triple Crown in 2015, click here.