The American Association of Equine Practitioners may not have all the answers, but its members have been attempting to learn more about the issues they face in areas such as economics, welfare, and medicine.

“We continue to be involved in getting ahead of the curve on welfare issues that come up. Using member involvement, we put people together to get firsthand validation where the issues are taking place,” she said.

A good example would be the urban working horse issue. In recent years, carriage horses and mounted police units have drawn scrutiny over concerns about the animals’ welfare and, more specifically, whether these horses are working under humane conditions and in acceptable environments. The AAEP sent equine welfare experts to tour five New York City horse carriage stables in February 2010. The group had been invited by Carriage Operators of North America and its president at the time, Tommy Doyle; AAEP paid the group’s expenses. The group was given full access to all parts of the stables, along with veterinary records.

“We saw typical horse problems that were not peculiar to an urban environment. There was not any inflammatory airway disease or excessive episodes of lameness complaints,” said Dr. Harry Werner, a former AAEP president, of the horses’ medical records (see JAVMA, Jan. 1, 2015).

Another example is the AAEP Board of Directors’ approval of the Racing Committee’s 10-Point Prescription for Racing Reform prior to the 2015 convention. Earlier that year, the association held a meeting of scientists, including experts on exercise-induced pulmonary hemorrhage in horses, pulmonary function, and sports medicine in humans, with the goal of identifying research priorities that may yield effective alternatives to current EIPH treatment protocols. The group identified these four research areas: 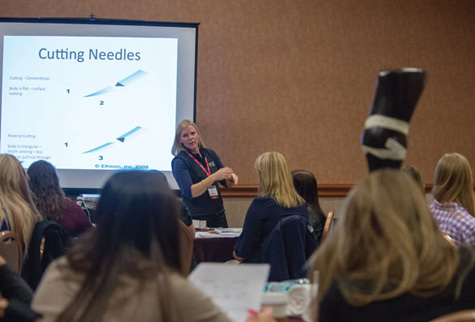 The AAEP Foundation will facilitate funding strategies for researchers to approach the National Institutes of Health and other entities for resources.

Dr. Anderson said EIPH research is an opportunity to change the focus from drugs to the real issue, which is the welfare of horses.

“EIPH is the problem, not furosemide. We want to find better solutions,” she told JAVMA. “The take-away from the (EIPH expert) meeting was there’s a whole lot that we don’t know about the condition. The (American College of Veterinary Internal Medicine) just finished a consensus paper on EIPH, and they came back with the same focus, which is we need to know more. That’s our job as stewards of the horse: to learn more, get better answers, and continue to push the knowledge boundaries on issues relating to the health of the horse.”

Meanwhile, another major equine research endeavor, the Laminitis Research Project, is nearing completion of its data collection phase. In late 2011, the AAEP Foundation announced the launch of a $1 million campaign for laminitis research and the start of the first of multiple studies to help unravel the mysteries of this disease. As part of that effort, Boehringer Ingelheim Vetmedica Inc. gave $200,000 to support the first study, “Case-control study of pasture or endocrinopathy laminitis.”

Dr. Noah D. Cohen, professor in the Department of Large Animal Clinical Sciences at the Texas A&M University College of Veterinary Medicine & Biomedical Sciences, is leading the research project. He told JAVMA that his group is in the process of analyzing data from about 200 cases and about 350 controls and should have information ready sometime this year.

In addition, the AAEP will work with the AVMA Veterinary Economics Division to create an economic survey that focuses on equine practice.

“The AVMA (Biennial) Economic Survey has given good information, but it’s relatively sparse in the equine world because of the weight of statistics. We’d like to peel back the onion a bit and be more specific in where we could make changes in equine practice that would have an effect on economics,” Dr. Anderson said.

Finally, the AAEP board approved a new five-year strategic plan during the convention. Communication will be front and center, both to internal and external groups. Wellness will also receive greater emphasis going forward.

“There are different ways to provide wellness resources. It’s not our primary job, but we need to help members find resources if they need them or be aware that it would make their lives better, even if they’re already good. One way is with increased mentoring, and we’re looking at how that’ll look,” Dr. Anderson said.

The AAEP formerly ran a mentoring program called “Vet to Vet,” which, she said, had some very good aspects but was difficult to maintain. “But we’ll restructure it and match new graduates or students with newer practitioners and older practitioners during the transition period so the mentees have the ability to look at multiple levels of practice experience,” she said.

Dr. Anderson continued, “A senior practitioner is not necessarily going to relate the same as a newer graduate would. This is to facilitate their entry into practice and whatever scenario, whether in research or academics or mixed practice. We’re not here to tell them where to go but to help with the transition (from veterinary college).” 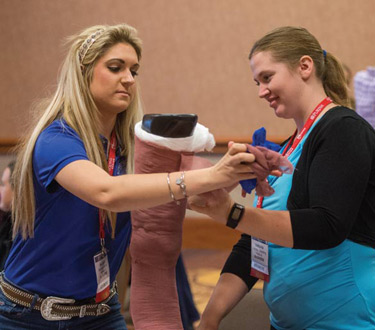 This year’s convention had a session on business ethics, and Dr. Anderson said the AAEP hopes to focus even more CE in that area to help members “see solutions and options that make these issues become less pressing.”

In all, 7,394 veterinary professionals, students, exhibitors, and guests converged on Las Vegas for the meeting. Convention attendance ranked behind only the 2009 edition that also was held in Las Vegas.