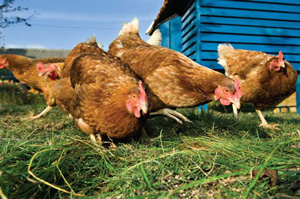 Dr. T.J. Myers, associate deputy administrator for Veterinary Services in the Department of Agriculture’s Animal and Plant Health Inspection Service, said that owners of farms affected by disease outbreaks, such as the 2015 outbreak with highly pathogenic avian influenza, will need to certify they are taking steps to prevent similar incursions.

“We’re really putting industry on notice that we expect biosecurity plans to be in place,” he said. “We don’t really have the capability yet to do all of the certification and auditing that would go along with a full biosecurity program, but we do want to develop that over the coming year so that we have a greater system of accountability for biosecurity.”

APHIS spokeswoman Andrea McNally said in November that agency officials had started discussions on those measures, and they plan to issue an interim rule and solicit comments on how to develop a stronger biosecurity accountability system.

She provided information indicating the interim rule involves indemnity related to highly pathogenic avian influenza and a requirement that any affected poultry producers self-certify they had biosecurity procedures in place when the disease was detected. APHIS officials plan to work with industry to design the biosecurity auditing system, which could be industry-driven or part of the National Poultry Improvement Plan.

The agency has been adapting its disease response efforts to both reduce the likelihood of an outbreak and increase the speed of disease detection and response if the disease were to reach through those added defenses, he said. For example, APHIS officials would use rapid tests on farms in response to signs of avian influenza, beginning the depopulation when the results indicate the virus is present rather than waiting for National Veterinary Services Laboratories confirmation.

The agency also has been conducting wild bird surveillance, with plans to collect samples from 41,000 birds, including both live and dead birds, from July 2015 to March 2016. As of mid-November, only one mallard from Utah tested positive for the presence of highly pathogenic avian influenza. Upward of 20 percent of samples collected have been positive for less-pathogenic strains of avian influenza, an unsurprising result considering such strains are endemic in North American wild birds, McNally said.

In addition, the USDA has set a goal of depopulating flocks with infections within 24 hours, using foam or carbon dioxide immersion if possible and ventilation shutdown if needed, he said. That method involves closing barn doors and vents, and possibly turning on heaters, to kill birds with a combination of asphyxia and hyperthermia.

Because of concerns for the birds’ welfare, Dr. Myers said decisions about ventilation shutdown will require consideration and approval from the national incident coordinator.

Residents of North America have been fortunate in that the highly pathogenic avian influenza viruses that spread among birds there have not been known to spread among humans.

Vaccination could be used to suppress the virus and control its spread in a region, and APHIS has emergency money ready for buying vaccines.