By Story and photos by R. Scott Nolen

Once upon a time, Nicole was married and a homeowner. She had a catering business and plans to become a small animal veterinarian.

Then Nicole got sick. Chronic fatigue, muscle pain, and dizziness. She spent six years either hospitalized or bedridden. Eventually, Nicole’s disorder was diagnosed as adrenal insufficiency, a potentially fatal condition in which the adrenal glands fail to produce sufficient amounts of cortisol. By then, she was divorced, thousands of dollars in debt, and living on the streets of Madison, Wisconsin.

“You know people are homeless, that homelessness exists. It blew my mind when it was me,” said Nicole, 38, who asked not to use her last name. “I’m the kind of person the safety net is supposed to catch: educated, middle-class. I’ve worked my whole life, I don’t have any legal problems. I shouldn’t be sitting in a parking lot because I have no better place to go.” 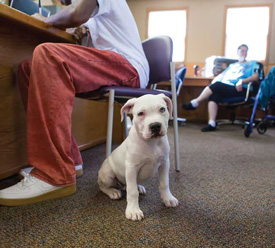 Emma has been Nicole’s constant companion through it all. Nicole adopted the German Shepherd-Siberian Husky mix when the dog was 1 year old, just before Nicole’s world came crashing down. “I fell through the cracks. Everyone lost faith in me, everyone except for Emma,” she said. “If it wasn’t for her, I’m certain I wouldn’t be here.”

Nationwide, 578,424 people were homeless on a single night in January 2014, according to the Department of Housing and Urban Development’s report to Congress that same year. While it’s difficult to say how many of them care for a pet, a 2009 study in the journal Psychological Reports put the number at 5.5 percent. However, the percentage of pet owners who are precariously housed—that is, experiencing housing instability ranging from facing eviction to living with friends or family—is likely much higher, homeless experts say.

Emma is now 15, and her health is starting to decline. Emma is arthritic, and a kidney illness requires that she eat a special diet. Nicole says her disability payments aren’t enough to cover the veterinary bills. “I’ve been just grieving because I couldn’t afford to take her to the vet,” she said.

Thanks to WisCARES, Emma has been vaccinated and had her nails trimmed, while Nicole received a supply of the food Emma needs. “WisCARES has been a big blessing for me,” she said.

The genesis of WisCARES is bittersweet, according to Dr. Ruthanne Chun, associate dean for clinical affairs at the UW School of Veterinary Medicine and one of the program’s executive committee members.

Pretty much all of our clients are unwilling to give up their animal, despite the fact they’re in a low-income or dangerous situation.

In 2013, a local man whose dog had an ear infection came to UW Veterinary Care, the veterinary school’s teaching hospital, where Dr. Chun is director. He had no money and was mistakenly turned away. “That’s not how it’s supposed to work,” Dr. Chun explained. “We have a fund to help clients who can’t pay for veterinary care.”

Another unit on campus ended up treating the dog, and the practice administrator there emailed the veterinary school dean about the incident. “In a way, it’s good that it happened,” Dr. Chun said, “because the dean asked me what I was going to do about it.”

She wanted to do something more than host a free vaccination or spay-neuter clinic. She wanted to aid both disadvantaged people and their pets on an ongoing basis. So she consulted with local veterinarians and colleagues and recruited Dr. William Gilles as WisCARES executive director. Dr. Chun had been his faculty adviser and knew Dr. Gilles was passionate about working with impoverished and underserved communities.

“When I decided to go into veterinary medicine, as much as I love working with animals, what motivated my decision was helping people,” Dr. Gilles explained. “That really interested me, this idea that you could become a veterinarian and practice medicine and work with animals but have this goal of benefiting the people you’re working with and helping them in their lives.”

WisCARES joined the Dane County Homeless Services Consortium, and Drs. Chun and Gilles spoke with dozens of social services organizations active in the county, which includes the city of Madison. “We spent the first six months talking to everyone in the community,” Dr. Gilles recalled. “We know there’s a gap where people aren’t getting veterinary care for their pets. But what are the other gaps for pet owners who are homeless or in precarious housing situations?”

Social workers shared case reports detailing how pet owners were denied housing or forced to surrender an animal because they couldn’t afford a rabies vaccination. Others recounted stories of pet owners having to choose between keeping a pet and spending a night in a homeless shelter. Shelters in Dane County and throughout the country do not allow pets, Dr. Gilles explained. Nicole says she spent most of 2014 camping around Madison because she refused to part with Emma, who is not only Nicole’s companion but also her guardian.

“When you’re homeless, you’re never safe,” she said. “I’m the only woman I know in this situation who hasn’t been assaulted.”

The innovation of WisCARES is the interdisciplinary collaboration between veterinary medicine and social work to deal with the problem of homelessness. Maurice Gattis, PhD, an assistant professor in the UW School of Social Work, joined the two veterinarians on the WisCARES executive committee to advise on the social work components of the program’s development.

One of the early challenges was determining demand for WisCARES services. The Madison Metropolitan School District is required by federal law to report the number of students experiencing homelessness; during the 2014-2015 school year, the district reported a total of 1,414 children and youth as homeless at some point during the year. “These kids are attached to families, so we know the number of homeless in Dane County is much larger,” Dr. Gattis said.

It soon became clear demand was there.

In spring 2014, WisCARES began offering free veterinary care once a month at the Social Justice Center in downtown Madison. In the meantime, Dr. Gilles was on the streets giving water and pet food to homeless pet owners, telling them about the walk-in clinic. No advertising was needed because word spread quickly, and within a short time, WisCARES was operating in a second location. By July, the program had added a third venue, courtesy of the Society of St. Vincent de Paul, a charitable organization operating in Dane County.

Thirty-three students from the two schools participate in the program, which is a hands-on opportunity to learn to collaborate while providing client-patient–centered health care. Intake is handled by the social work students, who are trained in client assessment and the availability of social services, including pet-friendly housing. The walls of the St. Vincent de Paul clinic are plastered with information about housing assistance and the food pantry the charity operates across the street. Meanwhile, veterinary students work with a veterinarian on patient histories and diagnoses.

Miranda Braithwaite has volunteered with WisCARES since almost the beginning and is now an employee. She recently completed her second year at the UW SVM and is currently working on her master’s in public health. An interest in animal shelter medicine led Braithwaite to pursue a career in veterinary medicine and attracted her to WisCARES. She shares the program’s goal of keeping pets with their owners and out of shelters.

Braithwaite said her time with WisCARES has supplemented her veterinary education as well as taught her how to run an organization. But the most revealing lesson so far has been the relationship between people and animals. “I always knew the human-animal bond was very strong, but I didn’t realize how important a pet can be to a person,” she said.

Kim Hayman is working toward her master’s in social work at the university and is the social services program developer for WisCARES. She described homeless pet owners as an “invisible population” whose bond to their animals unfortunately precludes them from accessing the shelter system and affordable housing programs.

She rejects the suggestion that a poor or homeless person shouldn’t own a pet for lack of the resources to care for it. “People experiencing poverty face so many challenges, and it takes a toll on them. They’re people who need that animal the most,” Hayman said.

Our clients have very minimal resources, and yet, they’re willing to give them to us so we can help not just them but other animals.

Pet boarding is one of the more vital services WisCARES offers its clientele. As Dr. Gattis noted, it is well-documented that in cases of domestic violence, the victim may not leave, fearing what the abuser might do to a pet. “We tell them, ‘We’ll take care of your pet, you go to a shelter, and you can come visit.’ It’s a way of protecting that human-animal bond,” he said.

Dr. Chun recounted an incident in which a woman called WisCARES saying she was depressed and suicidal, but before she had herself hospitalized, she wanted to know her cat would be taken care of. The cat was boarded, and the woman sought treatment. “We recognize that there are people who won’t get medical care or can’t go on a job interview because they have nowhere to put their dog or cat,” Dr. Chun said.

She and the other two members of WisCARES’ executive committee say the program has shown that the professions of veterinary medicine and social work can work together to the benefit of people and their animals. They also see potential for further interdisciplinary collaboration.

Dr. Gilles says it’s a privilege to be working with a population on the fringes of society. “We had a client who gave us a $5 donation. (Our clients say), ‘This is what I have, and it’s important for me that my animal get health care. I can’t pay what another clinic would want, but this is what I have, and I want to give it to you.’

"Our clients have very minimal resources,” Dr. Gilles said, “and yet, they’re willing to give them to us so we can help not just them but other animals. It’s such a genuine community.”