Dr. Dave Sjeklocha said cattle owners need to see that welfare is important to their veterinarians.

Promoting animal welfare should become a focus of veterinary practice, he said. And facility designs, employee attitudes, employee work ethic, and resistance among farm owners to proposals for change all can contribute to animal welfare problems.

In a presentation at September’s annual conference of the American Association of Bovine Practitioners, Dr. Sjeklocha, who works in a beef cattle practice in Satanta, Kansas, said veterinarians have to overcome clients’ comfort with old ways of managing cattle. For example, farm employees often remove calf horn buds without pain management, and he noted another veterinarian’s statements during the meeting that a client’s employees had ignored welfare protocols on the procedure until after public dissemination of an activist organization’s video that showed the procedure performed on that farm.

Dr. Sjeklocha, who is chair of the AABP Animal Welfare Committee, also said that, while veterinarians often are reluctant to correct clients on animal handling, they need to remain committed to having clients manage pain. That includes preventing farm employees from overusing electric prods and ensuring they use proper techniques to keep cattle safe from injury from gates and other farm equipment.

Speakers during the meeting described a veterinary profession conscripted into a war started by animal rights groups and, at the same time, guiding sometimes reluctant cattle industries toward needed improvements. That reluctance among clients and colleagues is fueled, in part, by what the speakers described as misleading activist videos of animal treatment, as well as by the time and monetary costs of adding, say, pain management to routine procedures.

Some described stress among cattle based on how they are handled, injuries from trailers designed for cattle smaller than those raised today, the need to measure aspects of welfare, and comparative effects of group and individual calf pens. One speaker also analyzed animal welfare concerns and potential societal benefits in connection with administration of the hormone recombinant bovine somatotropin.

David A. Daley, PhD, interim dean at the College of Agriculture at California State University-Chico and first vice president for the California Cattlemen’s Association, said veterinarians and their clients will lose when animal welfare issues supported by advocacy organizations opposed to current practices reach the ballot box. Those working in agriculture have yet to understand how to communicate with the public, he said.

He said that, in a survey of 200 cattle owners, 98 percent of respondents said they may want to talk or should talk with members of animal rights groups, and 94 percent said animals have rights to be raised and treated humanely.

Although veterinarians have credibility as scientists, science fails to solve ethical questions, which have no right or wrong answers, he said. Dr. Daley scoffed at the notion of studies to determine, for example, whether hot-iron branding hurts.

And he noted that, in welfare discussions, economic arguments show lack of care and compassion.

“We have to convince the public we truly care about animals, not just about money,” he said. “I don’t think that’s a hard pitch because I don’t think you’d be in this business even—as a veterinarian or a producer—if you didn’t like animals.”

Dr. Daley encouraged those in attendance to talk to activists with whom they disagree, a difficult task requiring suppressing both desire to be right and resistance to being told what to do. Cattle veterinarians need to work harder to build coalitions, including with the public, he said.

A pair of presenters—a veterinarian and a dairy company owner—described their experiences and reactions after advocacy organizations distributed video that depicted what those organizations described as abuse. One presenter described the arrest of a man who had abused cattle when supervisors were away and the siege of his company by news media and protesters, whereas the other described a mix of poor depictions of acceptable practices as well as methods that would be changed following the video’s release.

In a question-and-answer session after those presentations, audience member Dr. Arie Koppe of Picture Butte, Alberta, said video captured on farms by advocacy organizations had provided proof that animal abuse was occurring, and the abusive actions rather than the people who captured the video should be seen as villainous. 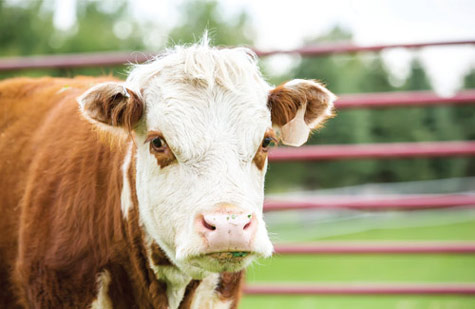 Then and in a follow-up message, he said veterinarians need to advocate for animals. Keeping the public happy to support livestock industries requires proper animal care and well-being and “total transparency,” he said in the message.

“If the media would have sat in the AABP sessions on animal welfare, they most likely would have left with the impression that our profession was downplaying the severity and frequency of cases of animal cruelty in our farming industry,” he said in the message.

Veterinarians may need to take a hard look at procedures considered to be normal, including use of electro-ejaculation in bulls, dehorning and castration without proper anesthesia, and tail docking at dairies.

“Change comes often with struggle and pain, but change we must,” he said in the message.

Dr. Daley said those working in agriculture don’t mind evolution in their industry, and they even understand it should occur. But they tend to anger when others tell them what to do, accepting a change only “as long as it’s something we come up with” or even mocking those who adopt different practices.

As for, say, grass-fed cattle or organic farms, he said to “Let the market take care of itself” and “Quit taking sides.”

Listening to others and trying to understand their perspectives, rather than just telling them they are wrong, is a challenge, he said.

“We have to listen to people who don’t agree with us, and that’s hard to do because we think that we’re right,” he said.

As for members of the public who are curious about agriculture, Dr. Daley said, “I think most people just want to know what we do, and they want to know they can trust you.”