Rumors of the demise of the extension veterinarian

No one knows exactly how many extension veterinarians there are, although they always have been few in number. 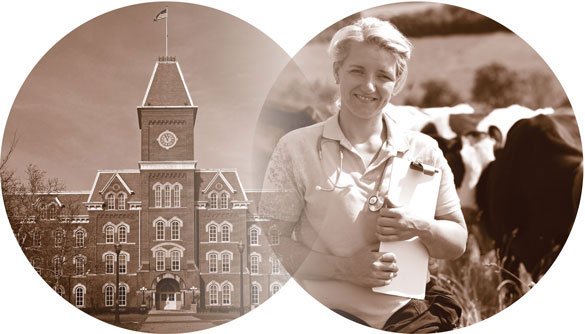 The Cooperative Extension System dates back to 1914. The Smith-Lever Act established the system as a partnership between the land-grant universities and the Department of Agriculture. The mission was “to aid in diffusing among the people of the United States useful and practical information on subjects relating to agriculture and home economics, and to encourage the application of the same.”

Veterinary extension has evolved to spread information from the land-grant universities to practitioners and animal owners mostly about food animals but also about horses and companion animals.

In recent years, federal and state budget cuts have led to challenges for veterinary extension, but it is unclear whether the actual number of extension veterinarians is decreasing. A new source of funding has been integrated research, education, and extension grants from the USDA.

Extension is just another form of outreach or education, said Dr. Robert J. Van Saun, an extension veterinarian at the Pennsylvania State University College of Agricultural Sciences. He sees himself as an informational resource for practitioners, producers, the agriculture industry, and everyone else throughout Pennsylvania.

“My role is to translate the research that’s generated at the level of the university down to practical use out in the field,” he said.

Extension veterinarians also have ventured into a spectrum of new areas, said Dr. Julie Smith of the University of Vermont Department of Animal and Veterinary Sciences, president of the American Association of Extension Veterinarians. These areas include emergency preparedness, biosecurity, foreign animal diseases, antimicrobial resistance, and public health.

“We’re trying to do these things that are not front-of-mind issues,” she said.

There are some national extension programs along these lines, said Dr. Gary Sherman of the USDA National Institute of Food and Agriculture, which distributes most of the federal funding for extension.

Dr. Sherman pointed foremost to the Food Animal Residue Avoidance Databank, which provides veterinarians with validated, adjusted withdrawal times for drugs judiciously administered to food animals at dosages different from those listed on the label. This 24/7, real-time scientific service is available both online and through a toll-free hotline (888-USFARAD), helping to prevent violative drug residues in food derived from animals.

“I see it as amongst the shining examples of extension because when you think of what extension is, it’s taking sophisticated scientific knowledge developed in the laboratory and applying rigorous scientific method and translating it into something that is directly useful and important in the field,” Dr. Sherman said.

Another noteworthy national program is the Extension Disaster Education Network, which shares high-quality educational resources to reduce the impact of disasters such as the recent outbreak of avian influenza.

At the local level, practitioners sometimes have seen the extension system as competition.

Dr. Smithcors wrote in 1963 that “the matter of encroachment upon veterinary practice by county agents and other governmental employees is nothing compared to what it used to be. In many areas, county agents are enthusiastic supporters of adequate veterinary service—by veterinarians.”

Dr. Herrick argued, “The primary thrust of veterinary extension programs should be continuing education for the veterinarian, whether in the form of meetings, demonstrations, newsletters, or workshops.”

Extension veterinarians walk a fine line when working with producers, said Dr. James England of the University of Idaho Caine Veterinary Teaching Center, AAEV immediate past president. He said, “We might be helping a client, but are we interfering or taking away the business from a practicing veterinarian?”

Dr. Stoltenow, now assistant director of the North Dakota State University Extension Service, strived as an extension veterinarian to help producers understand what practitioners can contribute in areas such as herd health. He said, “My goal was to educate people how to effectively and wisely use a practitioner.”

According to the article, “Extension veterinarians need to identify and clearly articulate the mission of veterinary extension, develop more collaborative programs across regions, and continue to serve as catalysts to bring diverse constituents together.”

The AAEV dates back to 1955 and currently has about 40 members. About a dozen attend the AAEV annual meeting at the joint annual meeting of the United States Animal Health Association and American Association of Veterinary Laboratory Diagnosticians.

Dr. Smith, AAEV president, said the association helps with “networking among veterinarians who have some interest in outreach.” She also highlighted the Applied Animal and Public Health Research and Extension Symposium that the AAEV holds in conjunction with the annual meeting.

Quite a few AAEV members do extension work with no extension appointment, noted Dr. England, AAEV immediate past president. He was with a diagnostic laboratory and now has a teaching appointment. He said, “Part of my duties was essentially extension, although in both places, it was labeled as outreach.”

Among the many examples of veterinary extension are the efforts of extension veterinarians who focus on dairy or beef cattle.

In Pennsylvania, Dr. Van Saun focuses mostly on dairy cattle. He does 25 percent teaching and 75 percent extension, including research to support extension programs. For 15 years, he has provided outreach to and education for producers and practitioners.

“What’s happened more is expanding my horizons where I do much more national and international extension work,” he said.

In North Dakota, Dr. Stoltenow spent his 17 years as state extension veterinarian working with any animal species, but particularly with beef cattle. A few of the highlights were providing education during outbreaks of tuberculosis and anthrax, helping develop Beef Quality Assurance programs, and creating a program to track herd pregnancy rates.

While at the Louisiana Animal Disease Diagnostic Laboratory, Dr. England provided education about diagnostics to producers through meetings and to practitioners through conversations about test results. Now teaching at the University of Idaho, primarily working with cattle, he educates producers and practitioners on subjects such as vaccination. Among other endeavors, he is an editor of the Cattle Producer’s Library.

Dr. Dale A. Moore has worked with cattle as an extension veterinarian at Pennsylvania State University, the University of California-Davis, and Washington State University. She said, “Veterinary extension, in general, has changed over the decades from primarily a response mode—fielding questions by phone and solving herd problems on farms—to an educational and research mode.”

She has participated in projects ranging from Pennsylvania’s certificate program in dairy medicine to a national program to reduce Escherichia coli O157:H7 in beef cattle.

Extension funding has been flat at best in many states recently. Dr. Moore said, “At many points, we all thought that extension—and particularly veterinary extension—was dead or at least agonal.”

The integrated research, education, and extension grants from the USDA have been rejuvenating veterinary extension, at least from Dr. Moore’s perspective. Research faculty in animal diseases and food safety have looked to her for help with the education or extension side.

The USDA's National Institute of Food and Agriculture provides about $300 million to states annually under the Smith-Lever Act in support of the Cooperative Extension System, a figure that has not changed much in the past few years. States have quite a bit of discretion in how to spend that money, said Dr. Sherman of the USDA, and states with a strong base in animal agriculture tend to spend more federal and state funds on veterinary extension.

In a Jan. 1, 1961, JAVMA editorial, Dr. Arthur Freeman, the assistant editor and later JAVMA editor-in-chief, wrote about “Why We Have Extension Veterinarians.” At the time, there were only 22 full-time and 13 part-time extension veterinarians in the United States.

“The contributions extension veterinarians have made to the veterinary profession and to agriculture, are worthy of recognition,” Dr. Freeman concluded. “We hope that all will view the veterinary extension service in its proper perspective and encourage its growth whenever possible.”

What is a land-grant university?

According to the Association of Public and Land-grant Universities, “A land-grant college or university is an institution that has been designated by its state legislature or Congress to receive the benefits of the Morrill Acts of 1862, 1890, and 1994." The mission of these institutions includes the teaching of agriculture.

According to the association, “Over the years, land-grant status has implied several types of federal support. The first Morrill Act provided grants in the form of federal lands to each state. The states used the proceeds from selling those federal lands to establish a public institution to fulfill the act’s provisions.”