Chronicling a century of veterinary medicine

JAVMA’s first issue came out in October 1915, which is why we are dedicating two issues to the Journal’s 100th anniversary. The Oct. 1 issue focuses on our coverage of veterinary news. More about the scientific side of the Journal will appear in the Oct. 15 issue. Both feature a recap of all 10 decades and a photo spread. 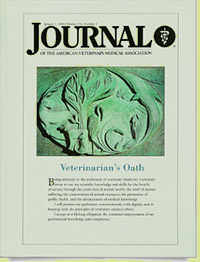 (Click on image to view timeline of Journal’s events)

So let’s just clear something up: Although we’re celebrating the JAVMA centennial this year, the Journal is actually older than that. Technically, at least. But that’s true only if you count the time that it wasn’t actually the Journal of the American Veterinary Medical Association.

You see, back in 1877, the AVMA (then the United States Veterinary Medical Association) first established an official journal for the Association, calling it the American Veterinary Review. (Fun fact: That makes the Journal one of the oldest surviving veterinary-related journals, which include The Veterinary Journal, established in 1875 in London, and Tijdschrift voor Diergeneeskunde, established in 1863 in Utrecht, The Netherlands.)

But the Association soon gave up its interest in the Journal, turning control of the Review over to its first editor, Dr. Alexandre Liautard, who became the publication’s sole proprietor and publisher in 1881.

According to Dr. J.F. Smithcors in his 1963 book “The American Veterinary Profession”: “Dr. Liautard successfully got the USVMA to give up the Journal so he could have full control over it, presumably because of his dissatisfaction with the restrictions placed on him by the Association regarding his management of the Journal. This move allowed him the freedom to strongly criticize, even satirize, the Association without worrying about annual re-election to the editorship. He took advantage of this freedom regularly and to great, constructive effect for many years.”

A periodical is the voice of its readers. It reflects their thoughts, their ideas, their knowledge and their labors. Since our profession is composed of a number of branches somewhat unrelated in their application, covering the entire scope to the pleasure of all concerned is a baffling undertaking. The general plan is to create new departments which will portray the passing events of veterinary medicine as accurately and as completely as possible.”
(JAVMA, April 1939 editorial,
page 421)

Although Dr. Liautard owned the Review, it never ceased, in effect, to be the official organ of the Association. However, after purchasing the rights to the American Veterinary Review for $2,500, the Association changed the name to JAVMA starting with the October 1915 issue, and the Journal once again was brought under the complete ownership and management of the Association. And so, this is why we celebrate the Journal’s 100th year with this issue.

As with any major milestone, a healthy dose of reflection is in order. Perhaps one of the greatest contributions JAVMA has made to veterinary medicine is simply documenting it. In doing so, current and future practitioners have a better understanding of the “why” behind what they learn in veterinary school and the current state of the profession.

Nonscientific content in early issues of the journal consisted mostly of editorials by the editor. These missives brought attention to things such as the need to improve educational standards, public awareness of the value of veterinarians, and the importance of Association membership.

Flipping through old issues reveals more than a few recurring quandaries. According to a June 1949 editorial: “The wholesale mixing of drugs with feed by manufacturers raises some disturbing questions. Will present meager sanitation and hygienic practices for the control of diseases be relaxed or even discarded? Will poultry producers simply rely on keeping their birds continually drugged by the use of medicated feeds? ... Or, perhaps, will the parasites and bacteria develop a resistance to the drugs as some organisms and insects have to certain drugs and chemicals?”

Going back, there also were concerns about laypersons encroaching on veterinarians’ territory. Plus, continued calls for better public relations programs. And the perennial question: Are there too many or not enough veterinarians? This question was posed more times in various ways in editorials than any other topic, it seems, and yet, still challenges the profession today.

Other editorials made some interesting predictions and captured the zeitgeist of the time. In 1940, as the horse was becoming less important with the rise of the car, a popular topic was the profession reorienting itself toward public health and a more medical bent. Concerning the perennially proposed reorientation, Dr. L.A. Merillat, then editor, countered in an editorial: “Conserving property for farmers is the principal function of veterinary science. Public health is but incidental thereto. ... Transforming our entire educational system from the agricultural to the medical domain would be an undertaking that is entirely out of proportion to the benefits in sight.”

For and by the readers

Over the years, the Journal also has helped create a sense of community among veterinarians, particularly when the profession numbered only in the thousands during much of the first half of the 20th century. From early on, JAVMA published not only obituaries but also birth announcements, marriages, practice transactions or sales, retirements, and even people moving or vacationing for the summer or winter.

In the early decades, no news was too trivial, it seems. Random items often ran under “Miscellaneous,” and later, “An’ Related Topics” or “Animals That Make the News.” Viral content for the veterinarian, essentially. In the July 1939 issue was this stand-alone nugget: “For about two years, a cat owned by a lady of Covert, Michigan, has been stealing baby squirrels from their nests and successfully rearing them as her own.”

An actual “News” section first appeared in the July 1939 issue. It initially featured veterinarians of the month, graduation announcements, government news, state VMA and AVMA committee reports, state news, and applications for AVMA membership. By the mid-1950s, birth and marriage announcements and the like had been phased out—perhaps because of an inability to keep up with the baby boom and growing membership. At the same time, more news articles began to appear, often about AVMA activities and entities and particularly the AVMA Annual Meeting, but they would later broaden into interesting stories of veterinarians’ experiences overseas or current events affecting veterinary practice.

In the United States, the faculty of the first veterinary college—Boston Veterinary Institute, started in 1854—published the American Veterinary Journal during the four years of its existence. The AVMA (then USVMA) began publishing the American Veterinary Review in 1877, a lapse of twenty-two years after the first college was started. Summed up, these facts show that the early faculties of veterinary medicine per se were remarkably sluggish in developing a periodical veterinary literature for the extension of graduate education beyond the classroom. The average lapse between the founding of colleges and journals was fifty-eight years in the four countries studied (France, England, Canada, and US). The average age of dogmatic veterinary education for these countries is 130 years, during which there was no journalistic support for an average of fifty-eight years. In fact, the fully animated veterinary profession, as of 1947, is only seventy-two years old—younger than the chap who’s hammering this out. There’s but one conclusion to draw: Veterinarians can read but don’t.

Members would often complain that the Journal’s news wasn’t as up-to-date as it should be, recalls Bernadine Clune, who joined the Publications Division in 1967 and retired in 2007. The former production manager said the transition to desktop publishing in the mid-1990s improved the News section’s ability to deliver more stories and in a more timely fashion because production was brought in-house, rather than staff having to send stories out to be typeset and converted to galleys.

Something to rely on

Regardless of how the Journal is put together, veterinarians and veterinary students have come to rely on its presence twice a month—whether online or in their hands. Dr. Andrew Maccabe, executive director of the Association of American Veterinary Medical Colleges, remembers first reading JAVMA while studying at The Ohio State University College of Veterinary Medicine.

“I think that’s a very important marketing strategy. By providing the Journal (free) to students, it allowed us to get familiar with it and learn to rely on it throughout our practice careers,” Dr. Maccabe said.

Today, JAVMA is the most widely read veterinary journal, reaching over 80,000 subscribers. Further, the Journal was deemed the most authoritative publication in the veterinary industry by 59 percent of respondents to a 2014 Essential Media study. The second highest, the North American Veterinary Community’s Clinician’s Brief, came in at 27 percent. A 2012 readership survey showed about 70 percent of subscribers read three of every four issues.

Nick DeLuca, AVMA managing editor, said, “Most (members) spend upward of an hour with the Journal each issue, so we know it’s reaching a large audience and that they value the content they’re getting.”

He continued, “The Journal is something members can see as a tangible piece of membership. It’s something the entire profession can relate to, and they know the name and what it brings when they see it in the mailbox twice a month. More importantly, with our stance on editorial independence, it’s an independent voice for the profession. Members know when the Journal arrives that they are getting credible information that will inform and educate them and give them research that will last for years.”

Dr. Ron DeHaven, AVMA CEO, says that given the speed with which communication channels are changing in society, JAVMA is entering a period of transition.

“On the one hand, it has such a rich tradition as the profession’s premier paper journal; at the same time, the needs and expectations of our members are changing, and so we need to figure out how JAVMA can best meet those needs in the future.

“Clearly, we need to move more into digital communications with JAVMA, but many members still want that hard copy mailed to them twice a month.”

Check out the new design of JAVMA’s homepage at www.avma.org/javma.
And don’t forget to wish the Journal a happy birthday on
our Facebook page or on Twitter with the hashtag #javma100.
AVMA governance & leadership
Research
Preventive medicine
Surgery