Production of JAVMA moved in April 1975 to the AVMA’s first owned headquarters, newly constructed in Schaumburg, Illinois, and dedicated that October. AVMA President Harry J. Magrane said, “This is truly one of the most significant and historic events in the 112-year history of the American Veterinary Medical Association.” Membership had grown from 40 to 26,000.

For the 1976 U.S. bicentennial, JAVMA followed veterinarians who accompanied a Bicentennial Wagon Train to Valley Forge, Pennsylvania. Australia waived a 17-year export embargo on native animals to fly six koalas to the San Diego Zoo as its bicentennial gift to the people of the U.S. To preserve the profession’s heritage, several state veterinary associations created veterinary museums during this decade. The Iowa VMA and Pennsylvania VMA celebrated their centennials.

President Gerald Ford was on hand for one of several dedications of new veterinary facilities. Three developing colleges were given reasonable assurance of AVMA accreditation. Veterinarian supply and demand was coming into question. The AVMA hired a staff economist, J. Karl Wise, PhD, in 1977 and commissioned a $200,000 manpower study by Arthur D. Little Inc. The 1977-1978 study projected that the number of veterinarians in 1985 and 1990 would exceed the number needed but predicted that demand for veterinarians with post-professional education and training would rise more steeply.

Advancements included an artificial heart implantation technique pioneered by a veterinarian, the production of the first goat in the U.S. by embryo transfer, and the birth of a calf from in vitro fertilization. A newly developed foot-and-mouth disease vaccine was seen as a breakthrough in genetic engineering.

Little Bo Peep and Napoleon were two of the famous “press agents” featured in an advertising program for the profession, part of the AVMA’s increasing public relations and educational outreach. The June 15, 1976, JAVMA cover photo and lead news story showcased the 1976 opening of the exhibit “Animal Medicine: The Story of the Veterinarian” at Chicago’s Museum of Science and Industry, nearly 15 years in the making.

Advertising by veterinarians was a different story. The Federal Trade Commission carried on a 5 1/2-year investigation alleging the AVMA supported restraints on advertising that inhibited free competition among veterinarians. It was only after the Association took “creditable action,” in the FTC’s words, to relax public and private restraints that the case was closed.

Veterinarians were facing competition from tax-exempt or -supported animal control agencies. Regulations were being proposed or enacted involving certificates of acclimation for animals being shipped and disposing of infective veterinary hospital waste. The Food and Drug Administration first proposed restrictions on the low-level use in animal feed of antimicrobials also important for human health. 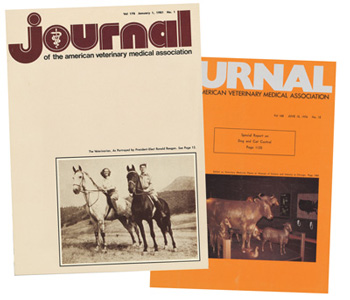 The 1979 World Veterinary Congress was held in Moscow in the spirit of detente. Dr. Arthur Freeman, JAVMA editor-in-chief and AVMA assistant executive vice president, was an AVMA representative. In 1975, an Air Force veterinarian was the U.S. project manager for a mission with the Soviets on a Kosmos satellite. In the May 1, 1980, issue, JAVMA interviewed the last chief of the Air Force Veterinary Corps as it was abolished.

AVMA published a much-awaited, third euthanasia report on July 1, 1978. Small animal practitioners and clients were alarmed by the number of dogs stricken with parvovirus infection. And a veterinary specialist assessed the implications for animal life resulting from a malfunction at the Three Mile Island nuclear power station.

An independent 1980 readership study found JAVMA was well-regarded by readers and competed effectively for advertisers’ dollars. The press run that year was 42,000.