Seeing drug abuse as a potential contributing factor to depression and suicide in the profession, Dr. Jon Geller, an emergency care veterinarian at Fort Collins Veterinary Emergency & Rehabilitation Hospital in Colorado, set out to start a conversation about drug testing in the veterinary workplace. 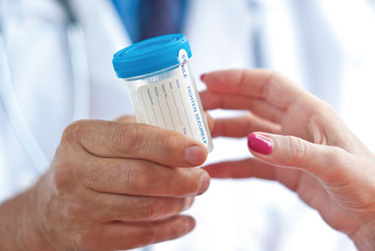 That conversation began July 13 in Boston at his Ethics section presentation during the AVMA Annual Convention, where he delineated the issue and revealed results of an online survey of veterinarians he conducted just prior to the convention.

Two previous members of his practice staff have died from drug overdoses. “I don’t know if they were intentional, what drugs they used, or if they got them from (the hospitals where they worked at the time), but I think it is likely they did,” Dr. Geller said. “More scrutiny is needed from our profession about what might be happening.”

Veterinarians work in a high-stress environment. Despite practice owners’ best attempts at controlling drugs, ample opportunities exist to access them.

There are several types of drug screening: pre-employment, random, post-accident, reasonable suspicion, and return-to-work. Overall, between 55 percent and 68 percent of small businesses in the U.S. perform pre-employment or ongoing employee drug screening, according to the Quest Diagnostics Drug Testing Index. Some is mandated testing, such as for pilots. Only 27 percent of temporary employees undergo drug or alcohol screening. Relative to veterinary practice, that means most relief veterinarians likely are not screened.

The most frequently detected substance is THC, the active ingredient of cannabis, and next is methamphetamines. Opioids are fairly common. Dr. Geller said close to half the drugs for which screening is performed are stocked in veterinary hospitals.

He also cited a new study by the Centers for Disease Control and Prevention that found heroin use has pushed into new demographic groups.

The study, “Today’s Heroin Epidemic,” released July 7, found that some of the greatest increases in heroin use occurred in demographic groups with historically low rates, such as women, the privately insured, and those in higher income brackets. From 2002 through 2013, the rate of heroin-related overdose deaths nearly quadrupled. The study is reported in CDC’s Vital Signs, available here.

Prior to the convention, Dr. Geller posted a short online survey he developed in conjunction with Lori Kogan, PhD, an associate professor and outcomes assessment coordinator at the Colorado State University College of Veterinary Medicine & Biomedical Sciences. The link was announced in the JAVMA. A total of 368 veterinarians responded, 55 percent of them having 10 or more years’ practice experience.

Seventy percent of respondents’ practices do not drug test. Of those that do, 18 percent do pre-employment testing, and a similar percentage test because of reasonable suspicion. Less than 8 percent test randomly.

The roughly 30 percent of practices that do test were asked: When testing is done in-hospital, are veterinarians included? Eighty-two of the 107 responses, or 77 percent, were yes.

Dr. Geller speculates that testing staff but excluding veterinarians may place a practice on legally shaky ground. He said testing for THC is an employer’s dilemma. “We do not test for THC in our practice. We could lose a third of our practice (staff), possibly even veterinarians,” he said.

From a business standpoint, testing job applicants and doing background checks can build staff trust, whereas video surveillance and random drug testing can backfire by creating a culture of distrust in the practice, he said. Random testing can be viewed as a deterrent but does raise questions of privacy and trust.

About 73 percent of those surveyed have worked in a veterinary workplace with someone they suspected or knew had an abuse or addiction problem involving illicit or prescription drugs. Dr. Geller said one should never underestimate the power of addiction. An addicted staff member can be a high-functioning employee. People with an addiction have been known to go so far as to gain qualifications so they could land a job where they would have access to drugs, he said.

About 25 percent of those surveyed said their place of employment offered an employee assistance program or health insurance coverage that included support for drug abuse and addiction; 41 percent didn’t know whether these were offered.

Most respondents said drugs were stored in a locked safe or a steel cabinet that had locked doors with separate keys accessible only by the registrant or authorized users, but 32 percent said the drugs were not stored in a place with limited access during normal work hours. Although 94 percent said the safe or cabinet was secured after hours, Dr. Geller noted that overnight in 24-hour practices, a few employees have drug access with minimal oversight.

Some 23 percent viewed drug abuse and addiction as a larger problem within the veterinary profession than in the general population, and another 41 percent saw it as the same prevalence. How much effort and resources should the state associations and AVMA invest to address the problem? Twenty-eight percent thought a substantial effort should be made, and another 56 percent were in favor of a moderate amount.

Some states have taken a stance indicating that practicing physicians cannot use marijuana medically or recreationally, even when off duty. In Colorado, even physicians who use medical marijuana legally are considered “unsafe to practice.” Half the survey respondents either agreed or strongly agreed there should be a similar stance for veterinarians.

Dr. Geller noted that the Colorado Supreme Court recently ruled that employees can indeed be fired for using marijuana.

The court upheld two lower-court decisions and ruled unanimously June 15 in favor of Dish Network, which had fired a quadriplegic man who tested positive for THC. He said he used it only when not working, to help with his disabilities. The superior court rejected the plaintiff’s argument that he was fired for engaging in a “lawful” activity because it was legal in Colorado. Instead, the court agreed with Dish Network’s argument that it remains illegal under federal law, and employers should be allowed to maintain a drug-free workplace. The ruling stated that “lawful” refers only to activities that are legal under both state and federal law.

“Probably the most valuable feedback was the written comments,” Dr. Geller said of the survey.

The comments were confidential, but collectively, told of veterinarians who were shocked to find colleagues, even a practice owner, addicted to drugs and sometimes stealing them. A recovering addict recognized he was “practicing passive suicide.” Many respondents had been or still were reluctant to seek help out of fear of losing their license and career or fear of the stigma. There was a call to include drug as well as alcohol impairment in wellness sessions along with the current focus on depression and suicide, to emphasize it in veterinary colleges and continuing education, and to make it “safer” to seek help.

The convention session audience actively engaged in discussion of the topic. One attendee pointed out that, in her state, any veterinarian who contacted the practice’s employee assistance service regarding a substance addiction or abuse issue would be automatically reported to the state board. In another state, the service is available at no charge to veterinarians but must be paid for by nonveterinarian staff, deterring its use by them.

Another attendee called for more focus on why people turn to substances to cope.