Chicken carcasses from the Iowa egg farm formed compost piles that were 6 feet high and 12 feet wide and, together, 6 miles long.

The piles contained almost 6 million hens, about one-fifth of the chickens killed in Iowa during the highly pathogenic H5N2 avian influenza outbreak this past spring, according to Dr. Jack Shere, associate deputy administrator for Veterinary Services in the Department of Agriculture’s Animal and Plant Health Inspection Service. He was among hundreds of department employees who worked inside barns during the disease response.

“What we’re seeing now is 10 percent of the entire layer inventory of the United States is gone, and you can’t replace that overnight,” he said. The outbreak also has reduced the national turkey inventory by 7.5 percent.

Since the outbreak ended in June, APHIS officials have been working with state governments and farmers to prepare in case the virus returns this fall with the southward migration of the same wild bird species that brought the disease to the barns starting in fall 2014.

Even the tough have hearts

Dr. John Clifford, chief veterinary officer for APHIS, told an audience of veterinarians at July’s AVMA Annual Convention that the H5N2 outbreak had, by then, both killed more animals and cost more than any prior animal disease event in U.S. history.

“We have destroyed—mass depopulation—42 million layers and pullets and 7 1/2 million turkeys,” he said. “We’ve paid, or are in the process of paying, $190 million in indemnity.

“This outbreak will cost us—the federal cost—probably somewhere in the neighborhood of $550 million.” 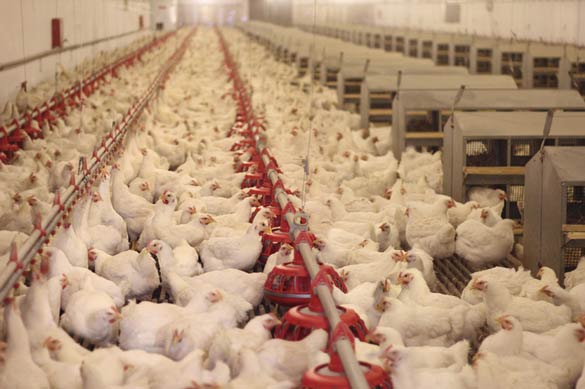 Dr. Randy Wheeler, executive director of the Iowa VMA, said losses from the outbreak also have taken a mental toll on farmers and their employees. Veterinarians in his state have been concerned not only about the welfare of the birds affected but also of those who own or work on farms, he said.

“The roughest, toughest farmer still has a heart,” he said.

“The impacts are felt all over,” he said. “And these communities, these small towns will suffer because of that lack of funding.”

Thousands of people have been out of work while production has stopped for depopulation and cleanup, Shea said. Dr. David Schmitt, Iowa’s state veterinarian, said some farm employees and their families have moved to find new work.

Margaret Van Ginkel has been coordinating Iowa State University Extension and Outreach service hotlines used by people who are under stress or in need of advice because of the influenza outbreak. Callers have included people who worked for farms or related businesses such as feed suppliers, lost jobs or portions of their incomes, wanted advice on managing finances or stress, feared return of the virus in the fall, or seemed to just want someone to listen.

James H. Patrick, city manager in Storm Lake, Iowa, said 1,800 employees of the local turkey processing plant were working reduced hours, and other residents who drive trucks, operate feed mills, or run retail stores or even recreational businesses all had been affected by the loss of turkeys and economic uncertainty. Storm Lake is home to half the 21,000 people in Buena Vista County, where about 6 million chickens and 800,000 turkeys died because of the outbreak, the third highest total of any U.S. county.

Patrick said turkey barn owners near the town are probably the most hurt. Those who depopulated their barns lost their sources of income, but their loan payments remain due.

Only two landfills in Iowa would take bird carcasses, and one did so in limited quantities, Dr. Shere said. The other was a

four-hour drive from many of the affected farms, problematic when the steel containers filled with bird carcasses exceeded highway weight limits.

Some carcasses were buried, and others were burned by the truckload in modified incinerators originally designed to heat asphalt for roads, Dr. Shere said.

A crew of 40 could depopulate and remove about 140,000 chickens from barns daily, Dr. Shere said. The mean population among commercial chicken farms with infections was more than 800,000 birds, according to APHIS data.

“We could eventually move fast enough to kill ahead of the disease,” he said. “But, with the fans on, that disease spreads from house to house.”

Those fans pushed plumes of virus into the intake fans of neighboring chicken houses, which are lined up end to end, he said.

Shea expressed pride in the 700-plus APHIS Veterinary Services staff members who worked on three-week field assignments at infection sites—250 of them on multiple assignments. They worked 21 consecutive days, sometimes 14 hours at a time.

“They are going away from their daily routine of life and jumping right into the middle of the biggest animal health emergency we’ve ever faced in this country,” Shea said. “And what they’ve done is helped arrest the spread of this disease and help these folks get back in business.”

But the strain of the work made some APHIS employees ill, he said.

“We’ve put down 50 million birds, and that’s a stressful thing in and of itself,” Shea said. “Just the idea of giving up all this time with their families is hard, and the hours they’re working. They’re not going away to a set of business meetings in a hotel someplace. They are on working farms with literally millions of carcasses.”

That work has included collecting diagnostic samples, assessing farm biosecurity, and supervising thousands of contract employees removing carcasses and sometimes years of manure. Shea said he also is proud of the tact and bedside manner shown by veterinarians in his agency in working with farm owners.

“The owners are obviously very distraught dealing with this situation because they know they’re not only going to lose their birds,” he said. “They’re probably also going to be out of business for a substantial time.”

APHIS also hired about 50 members of the National Animal Health Emergency Response Corps for 21-day assignments. Corps members are veterinarians and animal health technicians who signed up to be called during emergencies.

Steeling for the fall migration

This year’s outbreak started with the first known spread of highly pathogenic avian influenza viruses across the Bering Strait into North American flyways, likely through adaptation of the viruses to ducks, Dr. Clifford said.

The H5N2 virus, first seen in the U.S. in December 2014, was among three highly pathogenic avian influenza viruses—along with an H5N8 and an H5N1 strain—that emerged in wild birds in Washington through January. The outbreak among Midwestern commercial flocks started in early March.

At press time, the last known infection had occurred June 17 on an Iowa farm that had 1 million egg-laying hens.

We’ve put down 50 million birds, and that’s a stressful thing in and of itself. Just the idea of giving up all this time with their families is hard, and the hours they’re working. They’re not going away to a set of business meetings in a hotel someplace. They are on working farms with literally millions of carcasses.”
Kevin A. Shea, administrator,
USDA Animal and Plant
Health Inspection Service

The potential for the virus to return as wild birds fly south this fall remains a concern, Dr. Wheeler said, and those in the poultry industry are improving biosecurity and education as countermeasures. Iowa poultry producers had not before faced such an outbreak—conditions that can lead to complacency—but responding to one forces re-examination and prevention, he said.

Dr. Nicole Neeser, president of the Minnesota VMA and program manager for dairy, meat, and feed inspection in the Minnesota Department of Agriculture, said in June her state was recovering from spring’s infections while assuming the virus would return in the fall, as well as in years ahead. Bird owners are trying to prepare despite uncertainty about how the virus spreads among farms, she said.

“We have some ideas about how it’s spread, but we aren’t solid on that,” she said.

Dr. Neeser said the influenza outbreak, while unfortunate, has “opened people’s eyes to the really important roles that veterinarians play in agriculture and animal health” and demonstrated the need for public, legislative, and governmental support for veterinary response capabilities and public health.

Dr. Clifford said the U.S. needs to spend more on disease prevention and detection, including international assistance. And the nation needs not only research on interventions, such as vaccines, but also the ability to use them without loss of trade, he said, noting that vaccinating against avian influenza closes international markets.

“However, some significant trading partners have indicated that, if we began vaccinating, they would ban all U.S. exports of poultry and eggs until they could complete a risk assessment,” the announcement states.

During that assessment, U.S. poultry producers could miss out on billions of dollars worth of sales.

Dr. Clifford also thinks the U.S. needs to find ways to prevent mass destruction of birds, not only by implementing biosecurity but also by improving immunity among birds and breeding for healthier birds. He favors breeding for higher levels of natural resistance to influenza and other pathogens.

Administrator Shea said many biosecurity improvements will come through practices such as wearing proper protective equipment, rather than changes to farm buildings. In indemnity agreements, he said, farm owners have to commit to implementing certain such practices.

Dr. Shere said each farm should have an emergency management plan, and each state should have an animal euthanasia and disposal plan. The U.S. cannot be caught flatfooted again, he said.

“You put the birds down quickly, you get them disposed of quickly, and you don’t spread the virus that way,” he said.