Few providers remain in a controversial class of dog and cat suppliers for education, testing, and research, and the AVMA is advocating use of alternatives.

More than 100 Class B dealers were licensed by the Department of Agriculture to sell random-source dogs and cats for use in research during the early 1990s, according to a Government Accountability Office report. USDA figures indicate that only three licensed dealers remained as of this past July.

Class B is a USDA category for dealers who collect animals from various sources. It is distinguished from the Class A category, which includes dealers who breed and raise animals for sale.

The National Research Council and GAO report public perceptions that Class B dealers collect lost or stolen pets and state that some Class B dealers have provided inadequate care. 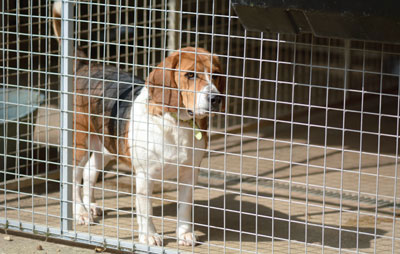 In a unanimous vote this past July, the AVMA House of Delegates changed the Association’s policy on use of random-source dogs and cats for research, education, and testing to add a reference to an NRC report that indicates dogs and cats with diverse characteristics are desirable or needed under some circumstances, but buying them from Class B dealers is unnecessary. The citation adds to language that already encouraged buying such animals from Class B dealers only in the absence of alternatives.

The AVMA policy addresses purchases of random-source dogs and cats from all sources, not just Class B dealers. But the cited NRC report provides advice on limiting purchases from the latter.

The delegates also added to the policy a statement that welfare considerations should be among the criteria considered when determining whether to use random-source dogs and cats.

Dr. Stacy Pritt, a delegate representing the American Society of Laboratory Animal Practitioners and candidate for AVMA vice president in 2016, said later the ASLAP was among the groups that worked with the AVMA Animal Welfare Committee—which recommended the policy changes ultimately adopted by the delegates—to make the policy reflect changes in sales and use of random-source dogs and cats since the previous version of the AVMA policy was enacted in January 2010. For example, the National Institutes of Health published in 2013 guidance on plans to prohibit dog and cat purchases from Class B dealers for NIH-supported research starting Oct. 1, 2014, with exemptions for research ongoing from the prior fiscal year.

“It was time to update it based on what’s transpired over the last 5 1/2 years,” Dr. Pritt said.

Other changes to the AVMA policy continue to support the use of random-source animals but make that support less emphatic.

For example, a prior statement that use of random-source dogs and cats provided great contributions to human and animal health and welfare now states such use “can contribute,” and the word “ample” was removed from modifying the word “justification” in reference to uses in research, testing, and education.

Dr. Martha Smith-Blackmore, who was chair of the AVMA Animal Welfare Committee when the changes were developed, said those edits were intended to recognize that random-source animals can provide a spectrum of potential benefits, subject to varied factors difficult to describe in a clear, concise policy. And she noted that all the changes were part of a routine, five-year review of the policy.

Dr. Mark Helfat, the new vice chair of the AVMA Board of Directors, has advocated for the AVMA to oppose purchases of dogs and cats from Class B dealers. He said after the vote this past July that the recent changes were a fair compromise and source of consensus because the policy cautions against use of Class B dealers and refers readers to the NRC report.

Dr. Helfat expressed hope that animal shelters and veterinary schools will find ways to cooperate to provide schools with random-source dog and cat cadavers for dissection, which he thinks could eliminate any remaining need for Class B dealers.

Dr. Smith-Blackmore noted that such a change could be difficult because work by shelter employees is reducing the number of unwanted animals, and some shelter operators fear that participating in research could make the public wary of shelters.

In March, the Association of American Veterinary Medical Colleges rescinded a policy that had supported use of Class B dealers for research and education. Information provided by the AAVMC indicates the organization’s Board of Directors considered reports that Class B dealers were unnecessary, NIH guidance published in 2013 on plans to prohibit purchases from Class B vendors for NIH-supported research, and some member universities’ prohibitions or restrictions on Class B dealer use.