Rambo, an octopus on display at Kelly Tarlton’s Sea Life Aquarium in New Zealand, was in the news this past April for photographing visitors to her exhibit with a waterproof camera provided by her keepers. Rambo reportedly needed just three tries to figure out how to work the camera. 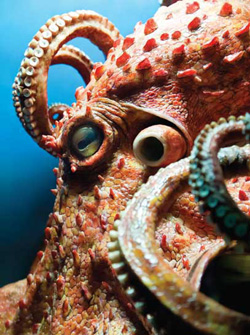 A search on YouTube yields scores of videos of these canny cephalopods twisting lids off jars, escaping Houdini-like from their aquariums, squeezing through impossibly narrow spaces, solving puzzles, and disguising themselves against a reef. No doubt, fascination with these mysterious invertebrates stems from our usual association of complex behavior with other species less alien to us.

Then there’s Paul, the so-called octopus oracle of the 2010 World Cup. Paul was a worldwide source of entertainment for picking the winner of 11 out of 13 matches, including the victor of the championship game, Spain. Prior to each soccer game, Paul’s keepers at Sea Life Centre in Germany put food in two boxes, each bearing a competitor’s flag; Paul “predicted” the winner according to which box he chose to eat from.

Dr. Poll’s fascination with the sea life she encountered growing up on Long Island in New York eventually led her to a career in veterinary medicine. Her choice has afforded her the opportunity to work with a diverse menagerie within the field of aquatic animal medicine, from beluga whales and sea otters to red-tailed hawks and giant Japanese spider crabs.

I had a professor who said if octopuses ever evolved into terrestrial creatures, they’d rule the world.

“I love octopuses,” she said. “They’re intelligent. They’re inquisitive. They’re cunning.” Despite the octopus’s odd appearance and anatomy—they have three hearts, no vertebrae, and a donut-shaped brain, for instance—Dr. Poll said they possess advanced sensory and cognitive systems that evolved in parallel with those of mammals.

Like squid and cuttlefish, octopuses are mollusks known as cephalopods. The octopus alone, however, has demonstrated a capacity for learning and problem solving as well as short- and long-term memory and is considered the smartest of the invertebrates.

“I had a professor who said if octopuses ever evolved into terrestrial creatures, they’d rule the world,” recalled Dr. Greg Lewbart, a professor of aquatic, zoologic, and wildlife medicine at North Carolina State University College of Veterinary Medicine. The octopus is one of the more intriguing animals Dr. Lewbart has encountered during a career beginning in the late ’80s when aquatic veterinary medicine was a relatively novel field.

A catalyst for the advancement of aquaculture and aquatic animal health and welfare in veterinary medicine came in 1977 with the formation of Aquavet. The program, created by the veterinary colleges at the University of Pennsylvania and Cornell University, offers an opportunity for veterinary students to participate in intensive clinical training in aquatic vertebrate and invertebrate medicine.

Aquavet has been headquartered since 2014 at Cornell, which, along with NC State, Penn, and the universities of Florida and California-Davis, is known for its aquatic animal medicine program. Mississippi State University is a recognized leader in the field of aquaculture.

Roughly 300 species of octopus inhabit the world’s oceans and seas and can be found in temperate and frigid waters alike. Humans eat octopuses, put them on display, and even keep them as pets. They’re also an important animal in behavior, intelligence, and vision studies.

Octopuses are solitary animals and, with the exception of the highly venomous blue-ringed species, not a danger to humans. When threatened, an octopus defends itself either by expelling a cloud of ink from a sac near its anus and speeding away or by employing its innate camouflage talent. This latter characteristic is one of the more intriguing cephalopod abilities and a topic of ongoing study.

“Octopuses are extremely expressive,” said Dr. Craig Harms, the marine health program director with the Center for Marine Sciences and Technology at North Carolina State University. “They change their skin color and texture in an instant, from white to dark to multicolored in a flash, and they do it intentionally. Octopuses are talking to you, though it’s difficult to interpret what they’re saying.”

Scientists currently are looking at the underlying neural mechanisms for how octopuses expertly match the color, pattern, and texture of their skin to their surroundings. Roger Hanlon, PhD, a scientist at the Marine Biological Laboratory in Woods Hole, Massachusetts, is a member of a team of researchers who revealed cuttlefish and squid skin is full of light-detecting molecules known as opsins. These specialized molecules are the same as those found in the animals’ retinas, suggesting they have a capacity for perceiving light through their skin. Independent research later confirmed that opsins are present in octopus skin.

Researchers suspect cephalopods are masters of camouflage partly because their skin provides visual information about the environment into which they’re blending.

Dr. Amy Hancock-Ronemus is the attending veterinarian at the Marine Biological Laboratory, where she oversees the humane treatment of animals used in the biological and biomedical studies conducted at the campus. She said octopuses aren’t ideal subjects for Dr. Hanlon’s camouflage research because they’re not the most cooperative of subjects in the laboratory.

“The octopus is too smart for this type of study. You put an octopus in a tank, and the first thing it will do is explore the tank, then try to escape,” Dr. Hancock-Ronemus explained. “They don’t necessarily care about matching the bottom (of the tank) because they’re probably smart enough to know they don’t have to.”

Cephalopods, like all invertebrates, are exempt from federal regulations covering certain animal species used in research. It’s a different story in the United Kingdom, where the common octopus (Octopus vulgaris), on account of its intelligence, has been a covered species since 1993. It was the only invertebrate designated as such in the U.K. until 2012 when the animal welfare legislation was expanded to include all cephalopods.

Notably, cephalopods were addressed for the first time in the 2013 edition of the AVMA Guidelines for the Euthanasia of Animals.

At the Marine Biological Laboratory, the policy is that all research animals are to be treated humanely, according to Dr. Hancock-Ronemus. “Any lab animal veterinarian will tell you we need to give animals the benefit of the doubt,” she said. “We know any animal can feel stress and distress, and there’s really no good argument for not giving them the most humane care we know of.”

One of the least understood octopus traits is its life span. It varies according to species, but octopuses, both wild and captive, live roughly 1 to 5 years. This short lifespan is a consequence of a reproductive strategy known as semelparity, meaning that octopuses breed only once in their lifetime and die shortly thereafter.

“It’s a big evolutionary question, why octopuses have evolved with such intelligence but only live a few years,” Dr. Hancock-Ronemus noted. “You don’t see anything like it in other intelligent animals, which all have relatively long life spans.”

Breeding octopuses in captivity is notoriously difficult, and most octopuses used for research and displayed at aquariums are wild-caught. These eight-legged escape artists require housing in modified tanks without internal vents or other openings, and a lid that can be securely fastened from the outside. Any number of anecdotes are shared about octopuses slipping their tanks to feed on crab or fish in a nearby aquarium.

As for health issues, Dr. Harms of the Center for Marine Sciences and Technology said parasitic and bacterial infections are the most common maladies seen in captive octopuses. “We don’t really have any way to address the parasites, which we usually see postmortem. Bacterial infections can be successfully treated with off-label antibiotics,” he explained.

On account of their high intelligence, octopuses require frequent mental stimulation. Eve Barrs, an aquarist at Shedd Aquarium, has worked with four giant Pacific octopuses over the past eight years. Shedd currently has one octopus. Barrs said each octopus is put through training sessions several times a week, providing the creature with variety and the staff an opportunity to closely monitor its behavior and health.

Each octopus prefers a particular food or has a favorite item or toy used as part of the enrichment experience, according to Barrs. One enjoyed ice cube trays. Another would not part with a whiffle ball. “He kept it close to him at all times, curled in his tentacle,” she recalled. “He’d bring it with him during feedings and carry it back to his den afterwards.”

Octopus personalities also vary. One of the Shedd’s previous octopuses of a nocturnal species would nevertheless wake during the day to interact with the aquarist when he was working on the exhibit. “If (the aquarist) was scrubbing algae, the octopus would be over in that area, watching and touching the brush and his hand,” Barrs said. “If he was taking a water sample, the octopus would be at the water’s surface to touch the sample bottle. And if it was time for a feeding or training session, the octopus was there right away, and even lingered for extra attention after the feeding was over.”

Another of the aquarium’s octopuses would wake up only long enough to play with a favorite toy or examine a new object. “That octopus really liked to squirt water out through her siphon,” Barrs recalled. “She would come to the surface and aim the spray of water right at whoever was standing next to her habitat.”