Veal calves that become nonambulatory at slaughter plants would need to be euthanized, rather than resting and proceeding to slaughter, under a proposed regulation. 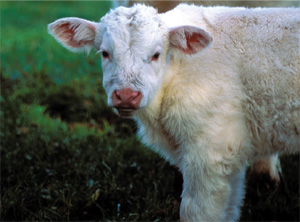 All other cattle already must be condemned if they become unable to walk at slaughter, and the proposal from the Department of Agriculture’s Food Safety and Inspection Service would remove an exception that lets slaughter facility employees move calves aside to become warm or rest.

The agency is accepting comments through July 13. The notice is available here under docket number FSIS-2014-0020.

The proposal is a result of a petition filed in November 2009 by the Humane Society of the United States. That petition states that the exception allows mistreatment of sick, weak, or injured calves.

The FSIS expressed tentative  agreement with the petition in 2011, and, in a March 2013 letter, FSIS Administrator Alfred V. Almanza said the FSIS would grant the petition. But the agency had limited resources for developing regulations, and he did not know when new rules would be made.

In that letter, Almanza agreed that FDA wants species-level antimicrobial data the exception could create an incentive for inhumane treatment, and removing it would improve compliance with laws and regulations requiring humane treatment at slaughter.

The May 2015 notice cites, as evidence reviewed in the decision, footage recorded by an HSUS investigator, who documented use of electric prods and physical force in attempts to make nonambulatory calves rise.

The notice also indicates that, if the rule is adopted, FSIS inspectors will no longer have to reinspect nonambulatory veal calves, letting them spend more time on other inspection activities.

The FSIS notice cites examples of inhumane calf treatment seen by agency inspectors and states that allowing reinspection of calves may be providing financial motives to force animals to rise or to send ill or injured animals to slaughter in hopes they can be held long enough to pass reinspection before collapse. Calves also may have inadequate access to water, as reported by inspectors more than 30 times in three years, or they may not be able to drink the water because they are used to drinking from bottles.

The rule also would encourage cattle owners and transporters to improve animal welfare, the notice states. The FSIS estimates the rule would affect 300 to 1,700 calves each year.

Slaughter facilities won’t be able to hold downed calves (May 1, 2013)