An infusion of new ideas and people marked the 46th annual Student AVMA Educational Symposium, held March 19-21 at the University of Minnesota. Nowhere was that novelty more evident than during the SAVMA House of Delegates and SAVMA Executive Board meetings, which took place the first two days of the symposium.

Jessica L. Carie, SAVMA president, said, “I’m excited about this coming year. Some developments from our past meeting, along with board members and new delegates, brought new ideas up for discussion that haven’t been addressed recently, especially as far as modernizing ourselves. We have been seeing debates about governance (within the AVMA House of Delegates), about getting with the times, and self-reflection of the organization. Surely there are things we can be doing better, too.

“We have some really enthusiastic individuals on our SAVMA Executive Board and SAVMA HOD who are throwing out cool ideas to make ourselves more relevant and help us better serve our mission. I’m excited to see what changes we can get in place at our next meeting.”

Some of the changes involved two new task forces that came out of the SAVMA HOD meeting. The Member Benefits Task Force will tackle membership benefits for students enrolled in cooperative programs, also known as 2+2 programs. These joint endeavors have veterinary students spending their first years studying veterinary medicine at one university and then finishing their education at another university with a veterinary medical teaching hospital (see sidebar, page 1035).

All the AVMA Council on Education–accredited veterinary colleges in the U.S. are full members in the SAVMA HOD, but partner programs are not. The University of Nebraska-Lincoln is represented in the SAVMA HOD; however, its representatives are nonvoting members and cannot run for the SAVMA board. One of Nebraska’s delegates introduced a motion to change the Student AVMA Bylaws to allow partner programs’ representatives to do so. After much discussion, delegates created a task force to look into how these programs are represented in SAVMA and present any proposals at the next SAVMA HOD meeting, which will take place in July during the AVMA Annual Convention in Boston

The Mental Health & Wellness Task Force was created to address these issues among veterinary students.

“Veterinary students are really aware of the stresses we face and are trying to promote wellness and a positive environment,” Carie said. The wellness task force already has a dozen volunteers with a list of specific topics they’d like to tackle. They have broken into separate committees to deal with each topic individually.

Carie said she also received a lot of positive feedback on speakers who talked about wellness during the SAVMA HOD meeting.

Dr. Jennifer Quammen and Ryan Smith, co-founders of High Performance Living, gave the talk “Lifeprint for Successful Veterinarians,” about how to promote wellness as a student and a veterinarian.

Meanwhile, the SAVMA Task Force on Bylaws sunset after spending more than a year reviewing the student association’s bylaws and manuals to ensure they were relevant and appropriate for today. It had been three years since the last review.

“They did an awesome job combing through everything to make sure we’re current and doing what we are set out to do,” Carie said.

Finally, the SAVMA HOD voted to add a position of liaison to the Women’s Veterinary Leadership Development Initiative. The WVLDI had approached the SAVMA Integrative Communications and Diversity Committee about creating such a position.

This year’s symposium had just over 1,000 veterinary students from throughout the U.S. as well as Canada and other countries.

A rich and diverse educational program was offered, including 89 lectures and 27 wet labs on a wide range of topics, with some held off-site, such as at the Como Park Zoo for a training session on darting animals and at the Sea Life Minnesota Aquarium on sedating fish. Day trips included Twin Cities Brewery and the Wildlife Science Center, a research facility helping to lead a wolf conservation initiative that also teaches about other Minnesota wildlife. Competitions in veterinary activities such as bovine palpation, radiology, and teeth aging took place as did athletic events from broomball to dodgeball to volleyball.

The AVMA COE held a listening session about veterinary school accreditation for students only. Previous listening sessions were held at the North American Veterinary Community Conference in January and Western Veterinary Conference in February. The SAVMA session had three council representatives—two COE members and one former COE member who is now a COE site visitor—responding directly to the students’ questions. Students were concerned about misinformation they had heard about accreditation and the council. They also had questions about workforce and marketplace issues and asked for clarification about outcomes assessments. A transcript is available here.

Dr. Donald F. Smith, dean emeritus of the Cornell University College of Veterinary Medicine, and Julie Kumble, founder of the Women’s Fund of Western Massachusetts, gave an interactive workshop on leadership in veterinary medicine. The vision of the fund is to empower women and girls to reach their full potential.

The Broad Spectrum Veterinary Student Association, the official student organization of the Lesbian and Gay VMA, and Veterinary Students as One In Culture and Ethnicity held their national meetings March 20, followed by the social event Diversity Extravaganza. A half day of talks on diversity took place the following day.

The closing gala’s speaker was Dr. Justine Lee, better known as the brains behind VetGirl, a subscription-based podcast service offering Registry of Approved Continuing Education–approved veterinary CE through a multimedia approach. Dr. Lee has a strong presence on social media and frequently gives talks about critical care medicine and toxicology. “She was fabulous,” Carie said. “Very inspirational. She’s so real and down-to-earth. She was great in terms of being open and honest, talking about life and her career, and even meeting her husband online.”

Planning is already under way for next year as veterinary students at Iowa State University gear up for the 2016 Student AVMA Educational Symposium, March 17-19. 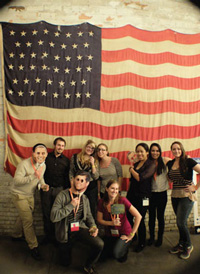 For a unique look back on the 2015 Student AVMA Educational Symposium, go here. Based on the Humans of New York photo blog, SAVMA’s Humans of Symposium features questions and answers with random students, providing a glance into their lives and personalities. The Vet Gazette and SAVMA information technology officer teamed up at the SAVMA symposium to produce this feature.