The Department of Agriculture is supporting an effort to create dog care standards that could eventually lead to development of a privately operated dog breeder accreditation program. 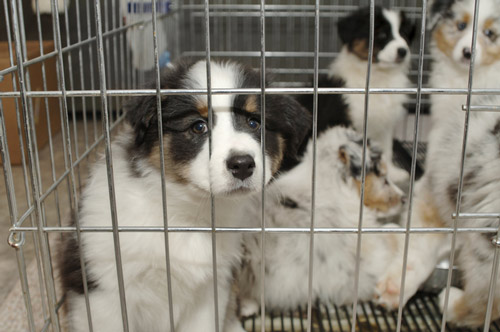 The Purdue University Center for Animal Welfare Science is developing and testing uniform care standards for dog breeding and raising over the next two years. The USDA Animal and Plant Health Inspection Service is supporting the effort, and the agency earlier this year included creation of a private accreditor program for professional dog breeders among its goals for the next five years.

Candace C. Croney, PhD, director of the center and an associate professor of comparative pathobiology and animal science, said the center intends to create and test a set of voluntary standards applicable at any scale of dog breeding as well as useful in creating a dog breeder accreditation or certification program. Whether the dogs are raised for sale as pets or for research, compliance with the standards would meet the dogs’ needs for socialization, enrichment, and comfort and include well-being assessment.

“We want to be a little bit careful that we don’t rush to release standards that haven’t been properly vetted and tested,” she said. “But we do realize that there’s an industry that’s waiting for this information, hungry for this information, so we’re really trying to be aggressive about our timeline.”

The work includes studying aspects of welfare where scientific literature is lacking, she said.

In an August 2014 announcement about the project, Dr. Croney said variation among state-based care standards and a lack of studies on some factors affecting welfare had raised questions.

“The public is becoming increasingly concerned that existing state laws, typically written as minimum standards, do not fully address important elements of dog care and well-being, such as health, genetics, reproductive soundness, and behavioral wellness,” she said.

Participation would be a voluntary activity beyond federal government requirements that affect thousands of dog breeders inspected and licensed by the USDA.

In addition to the goal of supporting creation of a dog breeder accreditation program, APHIS included in the same five-year plan a goal to partner with accredited professional or industry organizations such as the Association of Zoos and Aquariums to reduce the frequency of inspections at facilities that have implemented animal care and welfare programs.

Robin Ganzert, PhD, president and CEO of the American Humane Association, thinks the standards being created at Purdue could help improve the lives of animals and help eliminate the “demonstrable” cruelty in some dog breeding businesses. She thinks buyers and sellers of dogs alike could embrace the program.

“It’s very important for all of us who celebrate the power of the bonds with animals in our lives to make sure that we are able to have healthy animals brought into our homes,” she said. “And so, I think this program will go a long way to ending the abuse and the poor welfare practices we have seen in puppy mill types of facilities.”

Dr. Ganzert said the AHA, through one of the association’s chief veterinary officers, has provided information for use by the center in creating the dog care standards.

Dr. Martha Smith-Blackmore, chair of the AVMA Animal Welfare Committee and vice president of animal welfare at the Animal Rescue League of Boston, said an accreditation program is needed, and she applauds the effort. She said she has seen wide variability in animal care in industries that breed dogs and cats.

Dr. Michael J. Blackwell, senior director of veterinary policy for the Humane Society of the United States, said the project could provide better oversight of the dog breeding industry, which he said has an unfortunate number of puppy mills with questionable-to-poor care standards.

“Given that we do still see quite a few puppy mills across the country, it is clear that there needs to be more attention given to ways of providing oversight, and an accreditation process would certainly be one way to do that,” he said.

Dr. Smith-Blackmore hopes the program will be an all-or-nothing form of accreditation rather than ­a tiered form, which she thinks can unintentionally give legitimacy to operations providing substandard care. She expressed hope that the standards would cover transportation, often a source of horrid conditions for dogs traveling long distances to multiple stops as well as measures to ensure that dogs at accredited facilities are bred to have good health and provided with an acceptable quality of life.

She also hopes any certification or accreditation would require continuous verification of compliance. She noted that webcam feeds seem to remind poultry industry workers that someone could be watching to see whether they treat animals with respect, and she said webcams could provide similar benefits for dog breeding operations.

The AHA Humane Heartland program now certifies humane care is given to more than 1 billion animals on 10,000 farms, numbers reached in response to retail customer demands for improvements, Dr. Ganzert said. She expects the same pressure would apply to dog sales, and retailers would have a vested interest in supporting transparent standards based in science and evidence.

“It’s in the retailer’s best interest to provide for an opportunity for pets to enter our lives in a healthy way,” she said.

Dr. Blackwell said it’s likely retailers would pressure breeders to participate in such a program, a result he hopes will come to pass.

“I think the public’s interests will probably drive that support for working only with accredited breeders,” he said.

Dr. Croney said the center had yet to decide who would perform audits or certification under a national program using the standards, but they would be outside Purdue University.

She has been surprised by dog breeders’ positive reception of the project.

“Every single breeder that we have talked to, that we’ve consulted with, has actually given us good feedback that strengthens the standards,” she said.

Dr. Croney also hopes an accreditation or certification program would help participating breeders distinguish themselves from others and reassure those buying dogs that the participants planned and documented their efforts to provide the best possible quality of life for their dogs.

Dr. Ganzert said humans have a social contract with domesticated animals, whether they are raised for agriculture or as pets.

“As we evolve, as we learn and know more, we have to do right by what we know, and that means we’d better provide for better humane treatment of animals in all environments,” Dr. Ganzert said.