The Morris Animal Foundation has awarded a three-year, $155,000 grant to a team of Kentucky and Danish researchers to build a new reference genome sequence for the domestic horse. The sequence is anticipated to aid animal researchers by improving their ability to understand the role of genetics in equine health and well-being by, for example, mapping of disease genes. 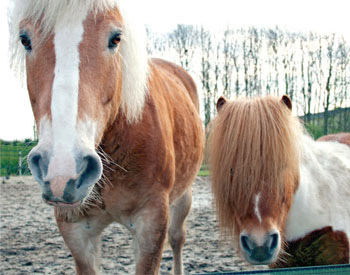 Sequencing of the horse genome began in 2006, building on a 10-year collaborative effort known as the Horse Genome Project, in which an international group of scientists used genomics to address important health issues for horses. The first draft of the horse genome sequence was completed by 2007 and deposited in public databases for use by biomedical and veterinary researchers around the globe.

The $15 million effort to sequence the approximately 2.7 billion DNA base pairs in the horse genome was funded by the National Human Genome Research Institute, one of the National Institutes of Health.

Also in 2007, the MAF created its Equine Consortium for Genetic Research: a five-year, $2.5 million project to rapidly advance equine health and fund the first genome reference sequence for the domestic horse.

“We intend to build on this earlier work. ... There have been dramatic improvements in sequencing technology as well as the computational hardware and algorithms required to analyze the data generated by the technology. Therefore, we now have the tools necessary to vastly improve the reference genome for the horse,” said Ted Kalbfleisch, PhD, of the University of Louisville Department of Biochemistry and Molecular Biology, who is the principal investigator.

The current reference genome for the horse, known as EquCab2, has been beneficial in studying horses and their genetic predisposition to disease, but it is not without its shortcomings, Dr. Kalbfleisch said.

The horse research community is working to understand the relationship among genomic structure, variation found within it, and complex diseases and traits in the domestic horse, he said. Specifically, researchers hope to better catalog genetic variation in guanine cytosine–rich regulatory regions, which control how genes are expressed, and understand how these regions affect health and performance.

Dr. Kalbfleisch will be joined in the research by Ludovic Orlando, PhD, of the Centre for GeoGenetics at the National History Museum, University of Copenhagen; and Dr. James MacLeod of the Gluck Equine Research Center at the University of Kentucky.