Several AVMA-supported bills promoting animal health and welfare and advancing the veterinary profession were passed into law during the two years of the 113th Congress, which ended in early January.

Additionally, Drs. Kurt Schrader of Oregon and Ted Yoho of Florida were re-elected to the House of Representatives where they’ll be joined by another veterinarian: Dr. Ralph Abraham, who won a runoff election in Louisiana’s 5th congressional district in December (see JAVMA, Feb. 1, 2015).

The Veterinary Medicine Mobility Act (H.R. 1528) was signed into law on Aug. 1, 2014, making it legal for veterinarians to provide complete medical care to their patients beyond their clinics and across state lines. The AVMA had been working on getting this bill passed for nearly two years, meeting with the Drug Enforcement Administration and members of Congress to explain why a restrictive provision within the Controlled Substances Act needed to be amended so veterinarians would be permitted to use all of the medications available to provide the best care for their patients.

Over 130 veterinary medical and other organizations joined the AVMA in its advocacy efforts. Those efforts were amplified when the Association took out advertisements in local publications to reach Capitol Hill staff and activated its Congressional Advocacy Network, resulting in AVMA members sending more than 27,000 letters to Congress in support of the mobility bill. 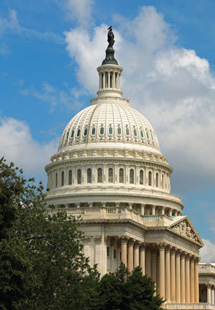 “This work on the Veterinary Medicine Mobility Act proves that when AVMA’s members bring forward concerns, we listen, and we work extremely hard to ensure that our leaders in Washington craft public policies that promote the health and welfare of animals and advance the veterinary profession,” AVMA President Ted Cohn noted.

Legislators from both sides of the aisle came together in early February 2014 to pass a comprehensive farm bill—The Agricultural Act of 2014, which gives veterinarians and scientists resources to continue providing veterinary care to animals, guarding the country against diseases that impact animal and public health, advancing science, and keeping America’s food supply safe and affordable.

The AVMA had been a longtime advocate for the legislation, urging policymakers to respond to a critical need for more agricultural research that supports advancements in animal health, production, and products. Of note, the bill did the following:

The farm bill included another important provision, the Animal Fighting Spectator Prohibition Act (H.R. 366/S. 666), which cracks down on the abusive practice of animal fighting by making it a federal crime to attend, or cause a minor under the age of 16 to attend, these events.

In one of its final acts, the 113th Congress passed the Consolidated and Further Continuing Appropriations Act of 2015 (H.R. 83), a spending bill that funds most governmental agencies through the end of the 2015 fiscal year. Each year as part of the congressional appropriations process, the AVMA, along with its many members and stakeholders, advocates for funding for programs that are important to the veterinary profession and directly influence animal health and welfare. The AVMA was pleased to see many high-priority veterinary and agriculture programs maintain or increase their funding levels through September. H.R. 83 included the following:

On Jan. 17, 2014, President Barack Obama signed into law the Consolidated Appropriations Act (H.R. 3547), which funded the federal government through the end of fiscal 2014. AVMA’s legislative priorities also fared well in this omnibus bill, which included the following:

The AVMA was pleased to see the Animal Drug and Animal Generic Drug User Fee Reauthorization Act (S. 622) signed into law on June 13, 2013, reauthorizing two programs that ensure that veterinarians, livestock and poultry producers, and pet owners have access to the drugs they need to keep their animals healthy. The bill permits the FDA to collect user fees from pharmaceutical companies so that it can evaluate the effectiveness and safety of proposed new animal drugs and expedite the rigorous drug approval process.

On Sept. 19, 2014, President Obama signed into law the Multinational Species Conservation Funds Semipostal Stamp Reauthorization Act (S. 231). The law helps raise millions of dollars for the conservation of endangered species. The AVMA, along with the Multinational Species Coalition—a diverse group of organizations with the goal of protecting key endangered species—has been advocating for this legislation since 2011.

The organizations hope that the stamp renewal would continue to support work within the U.S. Fish and Wildlife Service’s Wildlife Without Borders–Species Programs, which works with partners in Africa, Asia, Latin America, and other areas of the world to help conserve and manage species.

Although the AVMA saw many successes during the 113th Congress, several bills the Association endorses didn’t make it to the president’s desk.

The AVMA witnessed a huge outpouring of support for the Prevent All Soring Tactics Act (H.R. 1518/S. 1406), a bill that would take many important steps to ban the inhumane practice of soring walking horses to induce them to lift their legs higher and faster in the show ring.

On Nov. 13, 2013, AVMA CEO Ron DeHaven testified before the House Subcommittee on Commerce, Manufacturing and Trade, urging Congress to stop the culture of abuse that has existed in the walking horse industry for more than 40 years. The Association educated Hill staff about the detrimental effects soring has on horses at a “lunch and learn” in July 2013 and sent representatives to the Walk on Washington in June 2014.

“This work on the Veterinary Medicine Mobility Act proves that when AVMA’s members bring forward concerns, we listen, and we work extremely hard to ensure that our leaders in Washington craft public policies that promote the health and welfare of animals and advance the veterinary profession.”
AVMA President Ted Cohn

In supporting the PAST Act, the Association also advertised in several D.C. publications and on social media targeting the nation’s lawmakers and mobilized its Congressional Advocacy Network, resulting in more than 10,000 letters sent to members of Congress. The AVMA was joined in many of these activities by the American Association of Equine Practitioners and every state veterinary organization in the country.

Despite support from more than 300 House members and nearly 60 senators, the PAST Act was stalled by a few elected officials in key positions and by the introduction of an alternative bill, the Horse Protection Amendments Act (H.R. 4098/S. 2193). Because of this opposition, the PAST Act never made it to the floor for a vote in either chamber.

The AVMA worked to grow support for the Veterinary Medicine Loan Repayment Program Enhancement Act (S. 553/H.R. 1125). Unfortunately, each VMLRP award is subject to a 39 percent withholding tax, paid by the USDA. The VMLRP Enhancement Act would remove the withholding tax, allowing more veterinarians the opportunity to provide care in areas where they are needed most.

Currently, Internet retailers are not obligated to collect state and local sales taxes if they do not already have a physical presence in the state. This gives the retailers an unfair competitive edge over local veterinary practice owners by enabling the former to charge lower prices on what they sell.

“The AVMA is concerned about this issue because many veterinarians are small business owners and are at an unfair disadvantage when it comes to providing the products and medications that our nation’s pets need and deserve. This legislation will ensure that all businesses—both down the street and across the Internet—play by the same tax rules,” explained Gina Luke, assistant director of the AVMA Governmental Relations Division.

After the Senate bill passed in May 2013, the AVMA joined more than 300 U.S. organizations in a call to the House to take up the legislation as part of any tax legislation it tackled near the end of the congressional session. The legislation was not brought up for a vote, however.

In early 2014, the AVMA was disappointed to see Congress once again introduce the Fairness to Pet Owners Act (H.R. 4023/S. 2756), which the Association says would place onerous regulatory burdens on veterinarians by requiring them to provide a copy of each prescription for a companion animal, whether or not requested by the pet owner.

The AVMA and its members educated lawmakers on current state laws, policies, and regulations that already give clients the flexibility to obtain prescriptions from their veterinarian and fill the prescriptions at a veterinary clinic or off-site pharmacy of their choice. The Association also advised that this bill is not necessary at this time, since the Federal Trade Commission is still examining the competition and consumer protection issues within the pet medications industry.

The bill had received little support from lawmakers—only four co-sponsors in the House and two in the Senate—by the end of the 113th Congress. The AVMA encourages veterinarians to always honor a client’s request for a prescription when asked, in accordance with the AVMA Principles of Veterinary Medical Ethics, so the Association can continue to tell Congress the bill is unnecessary.

The Affordable Care Act, commonly referred to as Obamacare, included a Medical Device Tax provision that would impose a 2.3 percent excise tax on the sale of medical devices by the manufacturer, distributor, or importer of the device. Congress plans to use this tax to help raise $29 billion over 10 years to pay for health care reform.

Although the tax does not impact medical devices that are intended exclusively for use in veterinary medicine, there are instances when veterinarians purchase devices for use in their practices that are intended for human use. The concern for AVMA members is that, even though manufacturers are being hit with the tax, they could potentially pass it on to the purchasers, which could raise the cost of providing animal health care. The AVMA continues to support efforts that would repeal the medical device excise tax.