Urban working horses, such as carriage horses and mounted police units, have occupied city streets for decades. But in recent years, these usages have drawn scrutiny over the animals’ welfare, or more specifically, whether these horses are working in humane conditions and acceptable environments.

New York Mayor Bill de Blasio told animal rights activists during his run for City Hall that he would rid Central Park of horse-drawn carriages, which he called inhumane. He took office Jan. 1, 2014, but since then, no draft legislation has been written. Chicago Alderman Edward Burke introduced an ordinance in February 2014 before the City Council that would halt renewals of any licenses for horse-drawn carriage operators, but no action has been taken on that, either.

Seeing the topic being brought up in these cities and elsewhere, the AVMA and American Association of Equine Practitioners developed materials to better inform stakeholders in the debate. The AVMA produced a fact sheet this past December for members, the general public, and policymakers that addresses some of the issues these urban working horses face and provides guidance for their proper handling, treatment, and care. It is available here. 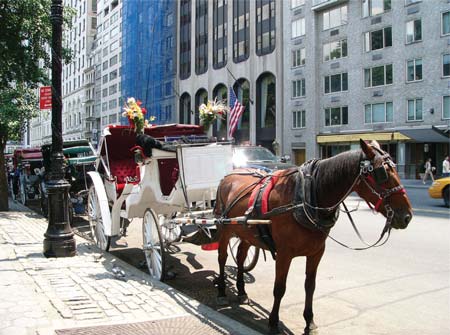 orses that live and work in urban environments can be managed well if they are operating under appropriate guidance, but they also face some unique conditions that impact their safety, health, and well-being. Precautions should be taken to address hazards such as pollution, climatic extremes, and physical stresses (e.g., ground surface hardness, load factors),” the fact sheet states.

The AVMA also endorses the AAEP’s policy on the use of horses in urban environments, which was also released in 2014 and is available here.

A few years earlier, Dr. Harry Werner, a former AAEP president, and a group of other equine welfare experts from the association toured five New York horse carriage stables in February 2010. The group had been invited by Carriage Operators of North America and its president at the time, Tommy Doyle; AAEP paid the group’s expenses. The group was given full access to all parts of the stables, along with veterinary records.

The equine veterinarians paid particular attention to the stables’ cleanliness, to quality and storage of feed (hay and grain), to safety and ease of the horses’ access into and exit from the stable, to the size of the stalls to make sure they had adequate turnaround room, to environmental factors such as climate control, and to body condition scores of the horses.

“We didn’t see a single horse undernourished. More than a couple were overnourished, but all healthy-looking,” Dr. Werner said. “The attitudes and behavior of the horses were those with what we’d associate with a contented horse. They were interested in their environments, would put their heads out to be stroked, and had their ears forward.”

Dr. Werner noted the farrier care was good, with trimmed, but not overdone hooves. Some horses had corrective shoeing. The horses’ preventive care included immunizations, parasite control, and dental work. The horses also were getting a five- to six-week “vacation” in Pennsylvania every year.

“We saw typical horse problems that were not peculiar to an urban environment. There was not any inflammatory airway disease or excessive episodes of lameness complaints,” Dr. Werner said of the horses’ medical records.

This past June, the Journal of Equine Veterinary Science published a retrospective review it conducted of a carriage company in South Carolina to gather information on the conditions, management practices, environmental conditions, and veterinary care for horses in these kinds of operations (JEVS 2014;34:816-819).

The study’s authors concluded that the carriage company provided good care and living conditions for its horses on the basis of compliance with five welfare domains. A main concern of the company regarding the horses’ welfare was “adherence to a maximum of six consecutive working days per animal.”

The authors called for further studies to define acceptable minimum standards for carriage horses, particularly to collect evidence-based data regarding degrees of stress in the horses.