Dr. Susan Horton was born with an affinity for reptiles and amphibians.

Born in 1962 in a suburb of Chicago, she has been keeping the animals as pets since she was old enough to catch them. She started with frogs and toads. Soon she had iguanas and tortoises.

She kept other exotic pets, too, and brought the sick ones along when her mother took the family cat to the veterinarian. The veterinarian would then try to guess what was wrong with them.

Wanting to work with exotic pets, Dr. Horton attended veterinary college at the University of Illinois. After graduating in 1995, she joined a practice with a high caseload of exotics, mostly birds.

In 2000, she established Chicago Exotics Animal Hospital in the suburb of Skokie. She used a turtle, her favorite species, as the hospital logo. She has built a caseload of about 20 percent reptiles and amphibians.

“There are many more of us out there with exotic pets who are interested in taking care of them well, and now we’re all meeting each other,” Dr. Horton said. “People are starting to trust the reptile veterinarians more and more, to see that we’re one of them.”

The AVMA’s 2012 U.S. Pet Ownership & Demographics Sourcebook estimated that 10.6 percent of households owned “specialty and exotic pets,” or pets other than dogs, cats, birds, and horses, at year-end 2011. The order of popularity for pet reptiles, by percentage of households, was turtles, lizards, snakes, and other reptiles. The total U.S. population of these pets was more than 5 million at year-end 2011.

Amphibians fell under “all others” within the category of specialty and exotic pets. Fewer than 250,000 households owned these other pets at year-end 2011.

According to the AVMA sourcebook, the U.S. population of pet turtles was 2.3 million at year-end 2011. Dr. Horton said turtles recognize people, and turtle owners are very connected to their pets. There is a lot going on in that shell, she said. She has clients who sleep with their box turtles, although she doesn’t recommend doing so.

Dr. Chris Griffin, an ARAV past president, also had an affinity for reptiles from a young age. He grew up chasing reptiles on his grandfather’s farm in North Carolina. He went to veterinary college knowing he wanted a large portion of his practice to include reptiles. Now he owns Griffin Avian and Exotic Veterinary Hospital in Kannapolis, North Carolina.

“Although many people may not expect reptiles or amphibians to demonstrate personalities, many of them kept as pets will do so,” Dr. Griffin said. He added, “Ownership of reptiles—and amphibians in some cases—may come with a wow factor. Having a 6-foot or larger snake is very cool for some folks.”

The uniqueness of reptiles and amphibians is a big draw, said Dr. David E. Hannon, ARAV president-elect, who practices at the Avian & Exotic Animal Veterinary Service at Memphis Veterinary Specialists in Cordova, Tennessee.

“I’ve got reptile owners that are more neurotic about their pets than some of the dog and cat owners that I’ve seen over the years, that bring in their Savannah monitor wearing a sweater,” Dr. Hannon said. “It’s just amazing how attached people can get to these animals.”

The care of reptiles and amphibians is not too time-consuming for owners who can manage the husbandry needs, said Dr. Angela M. Lennox, owner of Avian & Exotic Animal Clinic in Indianapolis.

“There is just a large group of people who are really fascinated by and love reptiles and amphibians—and some that don’t like them at all,” Dr. Lennox said.

Dr. Eric Klaphake didn’t discover his love of reptiles and amphibians until veterinary college. He went on to private practice with a focus on exotic pets and currently is with the Cheyenne Mountain Zoo in Colorado. He also is regent for the Reptile and Amphibian specialty under the ABVP and an ARAV past president.

Reptiles and amphibians have a lot of health problems related to husbandry because people often do not know all that is involved in properly caring for them, said Dr. Byron de la Navarre, an ARAV past president and owner of Animal House of Chicago. And they are challenging patients because each species is unique.

Dr. Horton said reptiles and amphibians have special requirements for light, temperature, and humidity as well as diet and housing. Some species do well as pets, she said, but other species require advanced knowledge to provide adequate care.

Dr. Hannon said some people do all their homework before buying exotic pets, but other people have no clue what they’re getting into. He hates the impulse buy or the giving away of baby iguanas as prizes because they contribute to the idea of a disposable pet.

Treating exotic pets is all about client education, Dr. Hannon continued. He went so far as to add a pet store inside a previous practice so that he could sell clients what the animals needed, with the store also becoming an adoption center for rescued animals.

A few health problems in reptiles related to husbandry include malnutrition, substrate ingestion, and thermal burns. The first thing Dr. Hannon does during most appointments is to hand a care sheet to the owner. Then he goes through the animal’s history, discussing things that the owner is not doing properly.

“The thing about reptiles is that reptiles do everything slow. They get sick slow, they get well slow. So there are not a whole lot of really true reptile emergencies,” he said. “And because they do everything slow, I think people are more inclined to wait before they go to the vet. They’re more inclined to talk to breeders and pet stores and try to figure out how to treat their animals.”

Dr. Klaphake said veterinary practice is not routine when treating reptiles, amphibians, and other exotic pets. He might be seeing a previously unreported condition in a species or a known condition that has manifested in an unusual or new way. He might have to figure out how to assess an eye problem in a small snake or figure out the dosage of a medication on the basis of the physiology of a species.

“We’re focusing in the reptile world probably down to, most of the time, five to maybe 10 species,” Dr. Klaphake said. “They are not probably quite to the stage of what one might truly classify as domesticated, but they are coming much more into that range—where we’re breeding for animals that can do well as pets.”

Some reptiles live longer and get bigger than people realize, Dr. Klaphake noted. Many reptiles live well into their teens. With certain turtles and tortoises, similar to bigger pet birds, owners might have to consider putting the animals in their will. Turtles, tortoises, boas, and pythons can grow quite large. Some tortoises grow to be well over 100 pounds.

Dr. Klaphake added that most reptiles do not do well in small spaces with companions. Sometimes one does well and another doesn’t because of intraspecies stress, such as one lying atop another to get light or heat.

The ARAV was established in 1991 to advance reptilian and amphibian medicine, surgery, and conservation worldwide. The U.S.-based association has grown to about 975 members from nearly 40 countries.

Dr. Wilbur B. Amand, ARAV executive director, said 85 percent of members work in private practice, with the remainder in academia, zoos, and aquariums. Most of the practitioners treat dogs and cats as well as exotic pets, with a few treating exotics only.

The ARAV helps promote the importance of reptile and amphibian medicine, Dr. Horton said. The association disseminates information in forums such as an annual conference, its website at www.arav.org, and the Journal of Herpetological Medicine and Surgery. Dr. Horton said members also share information on a day-to-day basis, such as one emailing a diagram for repair of a turtle shell to another.

Dr. Hannon said little information about reptile and amphibian medicine was available as recently as the late 1980s and early 1990s. Information has grown exponentially. He said the ARAV serves as a resource as new knowledge becomes available on the very different needs of each species.

Owners might not bring in sick reptiles and amphibians, either. Dr. de la Navarre said owners might weigh the cost of the visit against the price of the pet, or they might not have formed an emotional bond.

He continued, “So often with the exotic pets, whose instinct is to hide all signs of illness, when we are presented with the patient, their pathologic conditions are many times very advanced, making treatment more complicated and the prognosis for recovery more guarded.” 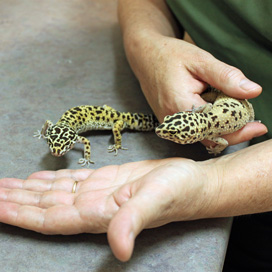 Dr. Horton said there is an overall need for veterinary care for exotic pets.

“It’s a part of veterinary medicine that, I don’t want to say has been ignored, but has been diminished in importance,” Dr. Horton said. “All of the exotics deserve to have the opportunity to get excellent veterinary care, the best available, and be treated as an important part of the family, as an important individual.”

Dr. Griffin said people will own reptiles or birds for years without thinking about preventive care. Sometimes he sees a chain reaction, though. He said, “Once someone brings in a pet that is not thriving and sees the positive response to improved husbandry and needed therapy, that client may bring their other exotic pets in or have their friends seek out appropriate care for their exotic pets.”

Of the nearly 14,500 practices that had registered with the AVMA’s MyVeterinarian.com practice finder as of early May, more than 3,200 offered services in the category of “snake, turtle, frog, lizard.”

Dr. Klaphake said reptile and amphibian medicine can be a passion that people come into late. He never owned a pet reptile until veterinary college.

For veterinarians who want to start working with reptiles and amphibians, Dr. Klaphake advises attending continuing education about the species and developing a relationship with a local pet store.

“I’ve seen a lot of people who didn’t like reptiles and amphibians end up falling in love with working with them,” Dr. Klaphake said.