Our other furry friends

Rabbits, a ferret, a guinea pig, and a hedgehog were among the patients on a recent morning at Chicago Exotics Animal Hospital in suburban Skokie.

Gary the ferret, age 8, was in for a checkup on geriatric conditions. Mickey the rabbit needed a recheck for heart disease. Chris the guinea pig was up for an annual examination. Pickles the hedgehog had diarrhea. Garbanzo the rabbit, a 3-month-old Flemish Giant, was there for an initial examination.

The AVMA’s 2012 U.S. Pet Ownership & Demographics Sourcebook estimated that 10.6 percent of U.S. households owned “specialty and exotic pets,” or pets other than dogs, cats, birds, and horses, at year-end 2011. Within that category, the order of popularity for exotic companion mammals was rabbits, guinea pigs, hamsters, “other rodents,” ferrets, and gerbils. The total U.S. population of these pets was nearly 8 million at year-end 2011.

Dr. Angela M. Lennox, owner of Avian & Exotic Animal Clinic in Indianapolis, has seen a shift in her practice from almost 80 percent birds in the 1980s down to maybe 30 percent currently. According to the AVMA sourcebook, the number of bird-owning households in the country decreased from 5.4 million in 1991 to 3.7 million in 2011. Now, exotic companion mammals make up more than half Dr. Lennox’s practice.

“People do like something that’s different,” said Dr. Lennox, who is regent for the Exotic Companion Mammal specialty and AEMV past president. She believes people have become more aware that exotic companion mammals make good pets, partly because many of the species can live in small enclosures.

Rabbits are the most popular pets at Dr. Lennox’s practice. She said rabbits live eight to 12 years, can use a litter box, can live in the house, respond to their owners, and show affection.

“You can ask a hundred people who have rabbits what they like about the rabbit, and you might get a hundred different responses,” he said. “Most of the pets that we see have personalities; some may be more subtle than others.” 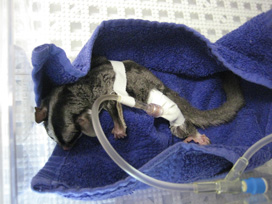 Certain species can be fads, mentioned Dr. Eric Klaphake of the Cheyenne Mountain Zoo in Colorado, who was previously in private practice with a focus on exotic pets. He said recent fads include hedgehogs and sugar gliders.

He added that people can choose from exotic companion mammals that do well socially in groups or species that do well alone. Ferrets can fare well alone or with others, while sugar gliders need a social network and should not be housed singly.

Dr. Horton spoke on the merits of rabbits. She said rabbits are clean, intelligent, and social. They bond tightly with their owners, but they are friendly to everybody.

Dr. Stephanie Moy of Chicago Exotics said she loves the variety associated with working with many species.

“There is always going to be a challenge just because with each animal, each species, there’s a different subtlety that you have to know,” she said. “A rabbit is not a guinea pig; a ferret is totally different.”

Dr. Lennox said rabbits tend to develop dental, respiratory, and gastrointestinal problems. Owners have more information about rabbits than about other exotic pets, but some owners still need education about husbandry. Dr. Hannon said one problem is that rabbits generally get too many apples and carrots as treats, so they don’t get the hay they need to wear down their teeth and provide fiber.

“There is so much we can do to keep them healthy,” Dr. Horton said. “We do great medicine with our rabbits, keep them live for a long time, in a good quality of life.”

Dr. Klaphake said medicine for exotic companion mammals is more advanced than medicine for some other exotic pets because many of these species have been kept as laboratory animals for generations, resulting in a better understanding of their needs and allowing for breeding for desired domestication traits.

“A lot of these exotics owners will surprise you as far as how attached they are to these pets,” he added. “They will pay for the same quality medicine and surgery as dog and cat owners.”

He recalled a client who owned a rat with mammary cancer. Dr. Klaphake told the owner that removing the mass would buy a few months. The owner spent $2,500 to $3,000 on the surgery.

Another case involved a client who owned a guinea pig with bladder stones. Dr. Klaphake ended up doing eight surgeries on the guinea pig, with the owner spending thousands of dollars.

Dr. Lennox said it is a little sad that some exotic companion mammals have short life spans. Dr. Klaphake said clients will hear that one animal lived for a long time, and then veterinarians have to dial back client expectations. He worked at a zoo with a hedgehog that was 14 or 15 years old, but pet hedgehogs typically live to be 4 or 5.

Ferrets develop several syndromes as they age, Dr. Griffin said, and mice and rats alike tend to develop cancer. Dr. Horton said rats are geriatric by age 2, although a dedicated community of rat owners values the animals as interesting and intelligent.

Unwanted babies are a challenge with some exotic companion mammals, Dr. Klaphake said. He said pet stores can misjudge the sex of the animals, although larger chains have switched to one sex or the other. He has had to tell clients that their pet is not fat, but pregnant, and then help them figure out what to do with the unwanted babies.

The AEMV was established in 2000 to advance the veterinary care of exotic companion mammals in all their variety. The U.S.-based association has grown to about 750 members from nearly three dozen countries.

Dr. Peter G. Fisher, chair of the AEMV Marketing Committee, said most members are in private practice, with 10 percent or fewer in academia. Most of the practitioners see dogs, cats, and exotic pets. His practice, Pet Care Veterinary Hospital in Virginia Beach, Virginia, is fairly representative with a 20 percent caseload of exotic pets, mostly mammals. About 20 percent of members see exotics only.

Dr. Griffin said veterinarians who work with exotic companion mammals might see more than a dozen species on a regular basis. The AEMV provides information about these species in forums such as an annual conference and a section in the quarterly Journal of Exotic Pet Medicine. Before the association, he said, it was hard to find information all in one place.

The Exotic Companion Mammal specialty was established in 2008 under the ABVP. By early 2014, the specialty had 22 diplomates. Dr. Lennox believes more owners of exotic companion mammals want veterinary care for their pets, so establishment of a specialty was a natural next step.

For exotic companion mammals other than ferrets, the percentages of owners who had veterinary expenditures in 2011 were, for guinea pigs, 19.0 percent; rabbits, 16.7 percent; “other rodents,” 15.3 percent; gerbils, 9.6 percent; and hamsters, 6.7 percent.

Dr. Byron de la Navarre, owner of Animal House of Chicago, worked in a pet store when he was young and recalls seeing owners of exotic pets who simply bought another whenever one died. Now he has a sense that owners of various exotic pets are willing to seek veterinary care. His practice serves exotic pets, cats, and dogs and recommends at least annual visits for all of them.

People’s perceptions of many exotic companion mammals have changed, Dr. Lennox said. The backyard pet bunny has become the house bunny. Advocacy groups spread the message that these species are not little disposable things. People get attached to the pets, and the pets become part of the family. Dr. Lennox still most often first meets clients when their pets get sick, but many owners subsequently come in for annual examinations for their pets.

Dr. Griffin said he doesn’t want to meet clients for the first time when their pets are dying, but that happens with exotics. When Dr. Griffin opened his exotics-only practice a decade ago, 75 to 90 percent of the patients were sick. Now clients bring in pets, even short-lived hamsters, for wellness visits.

Many people just don’t realize when exotic pets are sick, Dr. Hannon said. “A lot of the species that we treat are prey species, and a survival trait for prey species is that if you’re sick, don’t act it, because something is going to eat you. And so they hide their illness, and people don’t realize that these animals have problems.”

Dr. Moy noted that some people get an exotic pet without thoroughly researching care or costs. She offers education on husbandry and works within clients’ means as necessary.

Of the nearly 14,500 practices that had registered with the AVMA’s MyVeterinarian.com practice finder as of early May, more than 6,900 offered services in the category of “rabbit, pocket pet, and ferret.”

Dr. de la Navarre gets calls about exotic pets all the time from veterinarians who work mostly with dogs and cats. He discusses cases and offers advice on care, but he recommends referral if the problems seem too complicated.

He does not discourage other veterinarians from seeing exotic pets if they have an interest. “If they really want to try to care for exotic pets, and I encourage that, then they should pursue the knowledge that they need to do it right.”