AVMA continues to work with FDA on antimicrobials

The AVMA intends to give the Food and Drug Administration feedback on—and essentially review—licensing and oversight requirements in newly proposed veterinary feed directive regulations that will affect clinical practitioners.

Already, the AVMA has been working closely with the FDA as it plans to require increased veterinary oversight of medically important antimicrobials in feed and, by the end of 2016, to phase out production uses—e.g., growth promotion and feed efficiency—of such antimicrobials. 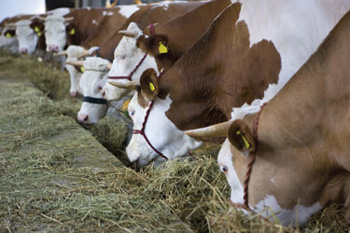 That increase in oversight will include eliminating over-the-counter availability of those drugs, some of which, instead, will be available through veterinary feed directives for disease treatment, prevention, or control. The FDA is trying to improve the VFD requirements ahead of that change. At press time, the agency had not yet announced its timeline for issuing the final VFD rule.

The VFD is the primary mechanism for veterinary oversight of antimicrobials administered in feed. Dr. Joni Scheftel, chair of the AVMA Steering Committee for FDA Policy on Veterinary Oversight of Antimicrobials (VOSC), described the directive as “prescriptionlike, but for feed only,” during the AVMA Executive Board meeting in April. The VFD is federally regulated, whereas prescriptions are regulated by states. Currently, there are only two VFD drugs: tilmicosin and florfenicol.

“During this transition, it is critical that the VFD program is as efficient as possible while protecting human and animal health and welfare. In the recently released proposed rule for VFDs, the FDA has included nearly all recommendations provided by the VOSC and the AVMA to improve efficiency of the program,” according to the VOSC. The committee also said that, because the program has not yet been finalized or implemented, it is difficult to predict what inefficiencies or obstacles may be encountered.

So, on the basis of a recommendation by the VOSC, this April the board approved a VFD tabletop summit for June 9-10 at AVMA headquarters. The purpose is to simulate the use of veterinary feed directives in real-life scenarios to identify possible unanticipated consequences, obstacles, and inefficiencies in the rules before they are finalized. The VFD scenarios will be designed to engage practitioners and other affected parties and allow collaboration to respond to the implementation of changes to the VFD process.

Dr. Christine Hoang, an assistant director of the AVMA Scientific Activities Division, said, “We don’t want to wait until it’s fully implemented to find out what the challenges might be. We want to provide feedback to the FDA so that can potentially be incorporated into the final rule.”

Dr. Hoang added that, at a meeting among AVMA, FDA, and Department of Agriculture representatives in February, the AVMA and USDA were informed that there would be an “aggressive timeline,” meaning the AVMA needs to give information learned to the FDA soon, so as not to delay the regulatory process.

In 2011, the AVMA had two in-person meetings with the FDA that were spent discussing recommendations from the VOSC for the VFD program. Among the AVMA recommendations reflected in the proposed FDA rule are a requirement for compliance with applicable licensing and omission of language defining the veterinarian-client-patient relationship.

Dr. Scheftel explained that enforcement and control of veterinary professional conduct is a state function through licensure and state practice acts.

Therefore, the proposed regulations say a veterinarian may issue a VFD for use in animals only “under his or her supervision or oversight in the course of his or her professional practice, and in compliance with all applicable veterinary licensing and practice requirements.” In other words, to issue a VFD, a veterinarian must be licensed in the state in which the animals reside and comply with the tenets of the VCPR and other requirements for professional conduct in that state.

Companies to reduce antimicrobial availability (May 15, 2014)