Public Health England and the Animal Health and Veterinary Laboratories Agency announced March 27 that the two people were responding to treatment and were among 24 people who accepted TB screening following contact with a cluster of cats infected with M bovis during late 2012 and early 2013. The screening also revealed two other people had been exposed to the bacteria by other infected cats but did not have the disease at the time of screening, preventing identification of the exposure source. 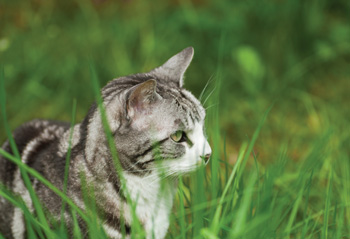 The bacteria isolated from infected cats and humans was indistinguishable in molecular analysis, “which indicates transmission of the bacterium from an infected cat,” the announcement states.

In the announcement, Dr. Dilys Morgan, head of gastrointestinal, emerging, and zoonotic diseases department at PHE, said, “These are the first documented cases of cat-to-human transmission, and so although PHE has assessed the risk of people catching this infection from infected cats as being very low, we are recommending that household and close contacts of cats with confirmed ‘M. bovis’ infection should be assessed and receive public health advice.”

A related government report, “Qualitative assessment of the risk that cats infected with Mycobacterium bovis present to human health,” states that the owners of cats found to be infected with the bacteria should be told about the risks associated with the diagnosis. The choice between treatment and euthanasia is a decision for owners in consultation with veterinarians, but treatment presents a “potentially significant public health risk,” the report states.

A scientific article, “Unusual cluster of Mycobacterium bovis infection in cats” (Vet Rec 2014;174:326), which was published the same day as the PHE announcement, described the unusual cluster of infections among cats in southern England.

The authors of that article indicated M bovis has been a problem in cattle, with badgers acting as a reservoir and vector, but fewer than 30 cats had confirmed infections in seven years, from 2006-2012. Yet, from December 2012 through March 2013, nine cats brought to the same veterinary clinic from separate households in a 5-km radius had confirmed or suspected infections.

Most of the cats likely were infected by wildlife such as rodents or badgers, and cat-to-cat transmission could not be ruled out, the authors wrote.

The public health agency indicated nearby cattle herds in which bovine TB was diagnosed were placed under movement restrictions, and human and animal health professionals were asked to be vigilant for disease occurrence in humans, pets, and livestock.

Information from the U.S. Centers for Disease Control and Prevention indicates M bovis causes less than 2 percent of tuberculosis cases in the U.S. and a mean of less than 230 cases annually. Most of those cases result from consuming unpasteurized dairy products, and others result from contact with infected livestock or wildlife.