For most veterinarians, the only thing worse than euthanizing a dying animal is lacking the means of ending its suffering in a humane and timely manner. Such is the dilemma sometimes confronting volunteer response teams dispatched to aid whales stranded along the coastal United States. 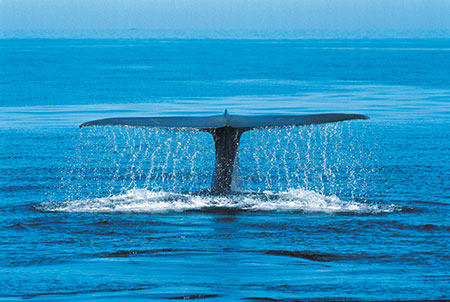 “It really takes only one live whale stranding experience to be gripped by the magnitude of the challenges and need for humane and environmentally responsible options,” explained Dr. Craig Harms, an associate professor of aquatic, wildlife, and zoological medicine at the North Carolina State University College of Veterinary Medicine.

As a member of one of the many federal Marine Mammal Health and Stranding Response teams along the U.S. coasts, Dr. Harms is well acquainted with the dangers—as well as the logistic and emotional hardships—associated with humanely killing a stranded whale with no chance of survival.

In a perfect world, every stranded whale would be rescued and returned to its ocean home. But that’s easier said than done.

“The flukes are handy for attaching a line to drag a dead whale, but for a live animal, a dislocated tail stock is a death sentence,” Dr. Harms said. Dragging a whale back into the water requires a special sling, a large, powerful boat, and a sufficiently steep offshore bottom that allows the boat near shore. Moreover, responders would have to deploy within 24 hours to avoid the harmful decompensating effects of stranding on the whale.

“Having that kind of capacity continuously on alert for such uncommon occurrences is prohibitive,” he said.

Dr. Teri Rowles coordinates the Marine Mammal Health and Stranding Response Program for the National Oceanic and Atmospheric Administration’s Fisheries Service. Citing reports to the MMHSRP from field responders, Dr. Rowles noted that live strandings of whales, dolphins, and porpoises make up only 1 to 5 percent of strandings per year and that roughly 54 stranded whales, dolphins, and porpoises were euthanized each year on U.S. beaches from 2009-2013. Each year, as many as four of these terminally ill and injured animals were baleen whales—a suborder of cetaceans that  includes the humpback, right, and blue whales.

The longer a whale is stranded out of the water, the lower its chances of survival. Stranded whales are usually injured or sick, according to Dr. Harms, which likely leads to their beaching in the first place. Whales cannot cope with the effects of gravity without the buoyancy of seawater, so breathing becomes increasingly difficult for a beached whale. Sunlight causes the whale’s skin to burn and blister. Seagulls scavenge the whale while it’s still alive.

Eventually, the pressure on the whale’s lungs and heart results in cardiopulmonary collapse and the animal’s death.

“It is a gut-wrenching experience to see a live whale on a beach, irreparably compromised, and not have a good means to relieve suffering, which can extend for days without intervention,” Dr. Harms said.

Whales can weigh thousands of pounds and may become stranded in remote locations, creating any number of safety hazards for response teams and difficult situations for rescuers.

“More often than not, live stranded large whales aren’t fully on the shore but remain in the surf zone, making everything you do significantly more difficult and dangerous,” Dr. Rowles noted. “Particularly for cetaceans and large whales, you have to know what you’re doing to assess the animal to determine the best course of action, keep yourself and people working with you safe, and to do an effective job of euthanasia if it is warranted.”

Chemical euthanasia options for such massive animals are extremely limited, given the large quantities of drugs required and the risk of relay toxicity to scavengers, particularly when pentobarbital-containing euthanasia solutions are used.

It really takes only one live whale stranding experience to be gripped by the magnitude of the challenges and need for humane and environmentally responsible options.”

The 2013 edition of the AVMA Guidelines for the Euthanasia of Animals underscores the issues associated with dispatching a large marine mammal: “Selecting a method of euthanasia for free-ranging marine mammals can be a substantial challenge because of large body size, environmental constraints, and concerns for the safety of personnel,” the guidelines state. “Currently available euthanasia methods generally have significant limitations that fail to meet aesthetic or other conventional stand­ards for euthanasia of marine mammals under field conditions, particularly for large animals.”

Methods of euthanizing free-ranging whales and other marine mammals endorsed by the guidelines include overdoses of injectable anesthetics and detonation of directional explosive charges near the animal’s brain.

A study published in the Journal of Wildlife Diseases this February describes a new technique for euthanizing baleen whales that involves injecting a cocktail of readily available and relatively inexpensive sedatives and pain relievers followed by a definitive method of euthanasia. Dr. Harms is one of the researchers who developed the new method, designed to be more humane and safer for responding personnel.

Confirming that necessity is the mother of invention, the new technique was born out of the collective difficulties experienced by Dr. Harms and his research colleagues. It was an encounter with a stranded right whale calf off Cape Lookout along the North Carolina coast in 2009 that drove Dr. Harms to find a better method of whale euthanasia.

The whale calf had a major spinal deformity and multiple lacerations from being entangled in fishing gear. When Dr. Harms and his teammates reached the calf, it was sunburnt and being scavenged by gulls. Pentobarbital couldn’t be used, so after using what sedatives they had available, they severed the artery in the animal’s fluke as a last resort.

“After our respective experiences, we brainstormed some alternatives, came up with the strategy outlined in the paper, and then we had the misfortune of having four additional cases in North Carolina over the next four years in which to try it out. As sad as each case was individually, it was a relief to have a technique that worked humanely,” Dr. Harms said.

The overall framework of the AVMA euthanasia guidelines was critical to the process, he added.


The technique developed by Dr. Harms and his colleagues begins with injecting a combination of midazolam, acepromazine, and xylazine into the whale. Specially made long, thin needles are used to pierce the thick whale blubber and minimize discomfort. Once the whale is heavily sedated, a saturated solution of potassium chloride is administered into the heart via another custom-made needle, this one long and thick, and a pressurized canister.

“The technique allows the responder to work mostly from the head end of the whale, away from the more hazardous fluke end,” Dr. Harms said.

Midazolam is a controlled substance, Dr. Harms explained, and can be omitted if controlled substances cannot be deployed to the field. The drugs do have the potential to cause secondary toxicoses in scavengers, but the risk is much less than for pentobarbital, he said. Tissue residue analysis revealed minimal risk, except possibly at the xylazine injection site if the drug is administered intramuscularly instead of intravenously, but, Dr. Harms added, the site could be trimmed for separate disposal.

“We have concerns on the use of certain chemicals if the whale carcass is going to be left on-site,” Dr. Rowles said. “The techniques Craig and his team have developed are especially useful because they are doable in many remote situations, they’re more environmentally friendly than euthanasia with more persistent and toxic drugs, and they do lead to a humane death for animals suffering on the beach or in the surf.”

The Journal of Wildlife Diseases report describes the new euthanasia method and details five cases in which it was used. The full study can be read online.