This past December, the Nonhuman Rights Project petitioned courts in three New York state districts for the release of Tommy, Kiko, Hercules, and Leo on the grounds that each of the captive chimpanzees is a “legal person” being illegally imprisoned. 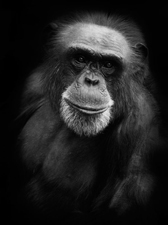 This is the first time any court has been asked to grant chimpanzees the right to bodily liberty through a common law writ of habeas corpus, a long-standing procedure for testing the legality of custody that has only ever been applied to human beings. Historically, laws in the United States have regarded animals as property with no protected rights.

The Nonhuman Rights Project’s novel argument is based on research showing chimpanzees possess many complex cognitive abilities similar to those of humans, including autonomy, self-awareness, and empathy. The animal rights organization contends these traits are sufficient for the four captive chimpanzees to be recognized as legal persons entitled to bodily liberty protected by a writ of habeas corpus under Article 70 of New York statutory law.

The NhRP filed its petitions during the first week of December 2013 in Fulton, Niagara, and Suffolk counties, where the chimpanzees live. (Hercules and Leo are part of one suit, because they are owned by the same laboratory.) Lawyers with the organization also requested that the chimpanzees be released and moved to a sanctuary selected by the North American Primate Sanctuary Alliance.

During an hourlong hearing before Mont­gomery County, N.Y., Supreme Court Justice Joseph Sise, NhRP founder and president Steven Wise explained that the question before the court is not whether a chimpanzee is a human being, but rather, whether a chimpanzee has characteristics that qualify the animal as a legal person. Wise cited legal precedents in domestic and international jurisprudence that grant personhood to corporations, partnerships, ships, and even religious books, idols, and a river in New Zealand.

“A legal person is not synonymous with a human being,” Wise stated according to a court transcript. “A legal person is an entity that the judicial system here—(and) we’re asking this court to begin to consider it—that judicial system considers is important enough so that it’s (legally) visible … whether it’s a river or a Hindu idol or a holy book or corporation.” He also highlighted how, prior to the Civil War, New York courts recognized African-Americans as legal persons subject to the writ of habeas corpus in a period when they were considered chattel.

Court documents show the NhRP believes Tommy, Kiko, Hercules, and Leo to be the last surviving chimpanzees in New York state. The original number of plaintiffs was seven, but three of the chimpanzees died before the petitions could be filed. Lawyers for the chimpanzees aren’t claiming the animals are being abused or mistreated, only that they’re “prisoners” denied their right to freedom.

Wise referred to affidavits submitted by a dozen primatologists supporting his claim that chimpanzees are cognitively sophisticated animals akin to humans, according to the court transcript. “They are extraordinarily similar to us,” he said. “And if we focus in on not just how they look, their brains are similar to us. They’re essentially almost us. And if you focus on the issue of autonomy, self-determination, choice, that those are such powerful concerns of the courts of New York that a being who can demonstrate—which we do demonstrate, that they indeed have that autonomy—that is a sufficient condition for legal personhood.”

Within a week, all three petitions had been denied. None of the judges believed that a writ of habeas corpus could be applied to a nonhuman animal. The NhRP wasn’t surprised by the rulings, given the novelty of the argument and the lack of any precedents to guide the courts. “These were the outcomes we expected. All nonhuman animals have been legal things for centuries. That is not going to change easily,” Wise said.

It wasn’t all bad news for the NhRP lawyers, however. The court transcript reveals a sympathetic jurist. “Your impassioned representations to the court are quite impressive,” Justice Sise said. “You make a very strong argument. However, I do not agree with the argument only insofar as Article 70 applies to chimpanzees. Good luck with your venture. I’m sorry I can’t sign the order, but I hope you continue. As an animal lover, I appreciate your work.” The cases are currently under appeal.

Richard Cupp is a self-identified animal lover. He’s also a tort scholar who teaches at Pepperdine University School of Law in Malibu, Calif. Cupp has been following the development of wrongful death lawsuits for pets since the late ’90s.

“Over time, I started realizing that a lot of the people pushing for noneconomic damages for pets, which I oppose as being bad for pets and bad for people, really had a bigger agenda in mind: They seemed more interested in the questions of personhood and rights status,” Cupp told JAVMA News.

“There’s an argument that noneconomic damages could be a steppingstone toward that by convincing people to see pets are more like children. I began to see the implications of personhood and rights as the most interesting issues.”

If you gave personhood to a chimpanzee or any other nonhuman animal, it would be a fundamental shift away from any sort of personhood that’s been extended previously.

Cupp says he respects Wise; he just doesn’t agree with him on animal rights issues. He considers Wise’s strategy to seek a common law writ of habeas corpus for the four chimpanzees a creative approach. “Generally, governments are the entities imprisoning people, so the writ of habeas corpus action is usually against the government. But if you go back in history, there were habeas corpus lawsuits related to freeing slaves. I think that’s part of what’s going on here, and there is some precedent for habeas actions brought against nongovernmental actors,” he said.

Because habeas corpus is a common law procedure, approval by the legislature is not needed to expand the scope of the law, according to Cupp. “The legislature can then pass a statute revoking what the judge has done, but this is an interesting way to avoid having to go through a popularly elected legislature,” he explained. “You don’t have to get a majority vote to create a statute; you just have to get the right set of judges to agree that the writ of habeas corpus applies to chimpanzees.”

As for Wise’s argument that the law already recognizes various nonhuman entities as legal persons, Cupp responds that each of those entities was created by humans to serve as legal proxies for humans. “The reason for creating corporate personhood is to serve human interests. It’s a legal fiction to more effectively manage and govern humans,” he said. “If you gave personhood to a chimpanzee or any other nonhuman animal, it would be a fundamental shift away from any sort of personhood that’s been extended previously.”

The same week the NhRP petitions were filed, Wise presented his legal strategy during a meeting at Yale University on the moral and legal justifications for counting animals as legal persons. Philosophers, lawyers, and scientists attended the Personhood Beyond the Human Conference, held Dec. 6-8, 2013, and keynoted by Peter Singer, PhD, author of the 1975 book “Animal Liberation,” which laid a philosophical foundation for granting rights to cognitively sophisticated animals.

Dr. Singer is a professor of bioethics at Princeton University and has been a leader in the animal rights movement for some 40 years. His presentation was a “nonspeciesist” answer to the question of what constitutes personhood. Dr. Singer began by noting how Homo sapiens has systematically subjugated nonhuman animals on account of a false belief in human exceptionalism that’s based on a speciesist worldview. “Just being a member of the species of Homo sapiens is not enough to give that being more consideration than you’d give to another being of a different species,” he said.

Rejecting speciesism requires equal consideration for similar interests of beings that do, in fact, possess interests, according to Dr. Singer, describing these beings as conscious creatures with subjective awareness and capable of feeling pleasure and pain. He says research supports the notion that elephants, chimpanzees, and dolphins satisfy these standards, although the same cannot be said of insects, plants, and possibly, fish.

“I believe we can now argue that these are important characteristics that can arguably contribute to a special moral status for these beings,” Dr. Singer said, meaning the interests of certain cognitively complex animals such as chimpanzees should be deemed as important as those of human beings. Dr. Singer believes the NhRP petitioning for a writ of habeas corpus marks a critical moment in the history of the animal rights movement.

“We are standing today, I believe, at the beginning of a long struggle for greater rights for nonhuman animals,” he said. “It’s a struggle that has been going on for some time and still has a long way to go. We can hope that the lawsuit Steven (Wise) has launched is a further significant step along that march.”

Dr. Singer thinks a favorable ruling for the NhRP would not only benefit Tommy, Kiko, Hercules, and Leo but also might set the stage for a new relationship with animals. “It’s possible,” he said, “that by getting a better recognition of the special moral status of some nonhumans—chimpanzees would probably be the easiest to start with—and getting them a different legal status, it’s possible that they can serve as bridge over what is now a very wide and deep gulf that we have in our conceptions between humans and nonhuman animals.”