Cancer is a leading cause of death in dogs and cats—particularly now that more pets are living long enough to develop the disease. At the same time, more pets are receiving treatment for cancer, and those treatments are improving, according to experts in the field of companion animal oncology.

Here, a handful of the many veterinarians who treat or study cancer in pets discuss their work and share their optimism about progress in the fight against the disease.

MEMBERS OF THE FAMILY

Overall interest in and experience with companion animal oncology have increased over the past several decades as people have placed more value on pets, said Dr. Laura Garrett, president of the Veterinary Cancer Society and a diplomate of the American College of Veterinary Internal Medicine’s specialty of oncology. She is a clinical associate professor at the University of Illinois College of Veterinary Medicine. 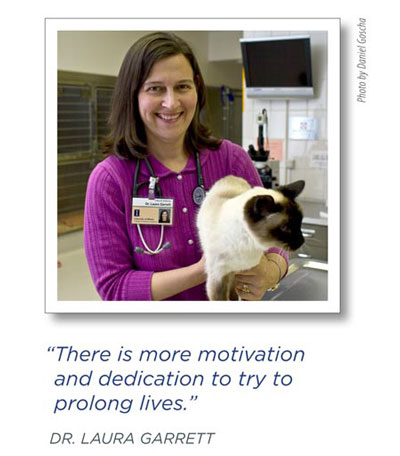 It is much more common now to treat pets with cancer, Dr. Garrett said.

“Pets very much are members of the family for many people, and thus, there is more motivation and dedication to try to prolong lives,” Dr. Garrett said, adding “and then we can discuss how most of the treatments are very well-tolerated.” She explained that many pet owners fear cancer treatment will diminish quality of life.

Dr. Garrett noted that veterinarians have access, via extralabel use, to the growing armamentarium of chemotherapy drugs for humans. Some drugs started off being prohibitively expensive but became affordable as generic versions were released.

Back in 1976, a group of veterinarians formed the Veterinary Cancer Society. The society has developed from a conference organizer into an association of more than 800 members with an interest in veterinary oncology. The society’s website offers a variety of resources, including information about clinical trials.

Over the years, oncology also has become a part of the curriculum at veterinary colleges and the continuing education program at veterinary conferences, Dr. Garrett said. As a result, many general practitioners are outstanding at treating cancer in pets, consulting specialists, or referring cases when necessary.

As an oncologist, Dr. Garrett finds it satisfying “to talk to owners about their goals and their expectations; their financial constraints and abilities, what have you, because that does become part of it; and then come up with a plan that is going to work for them. And as long as the pet feels good and the owner is happy with what is going on, then I think we’re doing our job well.”

Oncology is a rich scientific area where new knowledge translates quickly to the clinic, said Dr. Chand Khanna, who works in comparative oncology at the National Cancer Institute and practices at The Oncology Service in Washington, D.C., and Virginia. He is immediate past president of the oncology specialty within the American College of Veterinary Internal Medicine. 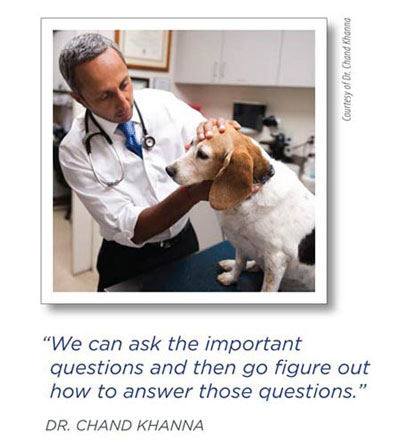 At the National Cancer Institute, Dr. Khanna studies osteosarcoma in dogs and children. Advances in cancer treatment have not yet led to meaningful im-provements for patients with osteosarcoma, he said.

“The field of cancer is really, I think, an area where the perspective of veterinary training—which includes this comparative view of biology—is very important,” Dr. Khanna said. “We as veterinarians have a view towards problem solving that is really based in an understanding that we can ask the important questions and then go figure out how to answer those questions.”

Comparative oncology has gone through tremendous growth, he said. As one example, he pointed to his work with the new Comparative Oncology Trials Consortium of veterinary colleges to conduct clinical trials of chemotherapeutic drugs in dogs.

In his practice, Dr. Khanna has found that clients recognize that cancer is not a death sentence for pets. He talks with clients about the goals, risks, and costs of treatment options.

“As cancer therapies become more effective and as we become more able to discuss cure as an outcome, then the decision making around cost is really quite different, different than if you’re discussing a treatment that is only going to make something better for a short period of time,” Dr. Khanna said.

FROM TERRIBLE TO MANAGEABLE

Most of the knowledge and treatments in companion animal oncology come from the fields of human or comparative oncology, but research focusing on cancer in pets is progressing on a number of fronts. 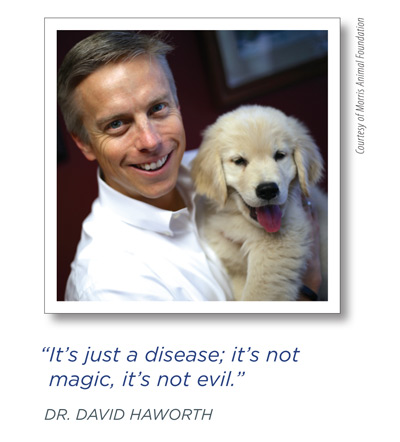 Among other endeavors, the Morris Animal Foundation funds studies in veterinary oncology. Dr. David Haworth, president of the foundation, said, “Cancer is really where there are some fascinating questions that are being answered, and there are real improvements that are being made.”

Dr. Haworth said that when he was growing up in the 1970s, cancer seemed to be a death sentence even for people. He believes cancer has transformed from a terrible diagnosis to a more manageable disease, both for people and for pets.

Morris has funded more than 200 studies of cancer in dogs, cats, and other animals. The foundation has started the Canine Lifetime Health Project, longitudinal research of the sort that has led to many advancements in human medicine. The first study is the Golden Retriever Lifetime Study, which will follow 3,000 Golden Retrievers from birth to death looking at cancer and other conditions.

Dr. Haworth said Golden Retrievers appear to have a predisposition to certain cancers. The objectives of the lifetime study include identifying how factors such as genetics, environment, and diet affect the dogs’ risk for cancer.

When Dr. Haworth went into practice in 1999 after serving a fellowship in cancer biology, he felt as though he was the one guy who was willing to try chemotherapy in patients. Now, some general practitioners in every community are treating cancer in pets, he said.

“We already have pretty effective ways to deal with most cancer, if you can catch it early enough and if you have owners who are willing to go through it,” Dr. Haworth said. “We need to learn as a profession to deal with cancer for what it is. It’s just a disease; it’s not magic, it’s not evil.”

Dr. Rodney Page has always been amazed by the commitment and sacrifices that many pet owners will make to treat pets with cancer. 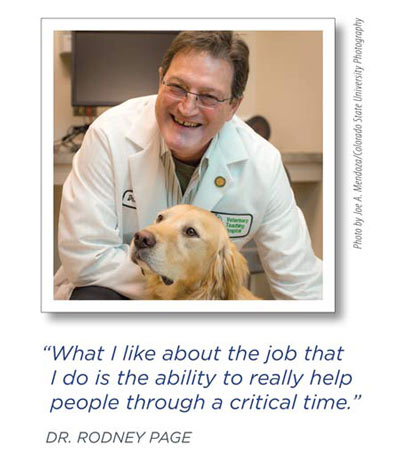 “What I like about the job that I do is the ability to really help people through a critical time, provide some reliable information for them to base a decision on, and to offer hope in a time when it’s really a struggle,” said Dr. Page, who is director of the Flint Animal Cancer Center at Colorado State University and scientific leader of the Golden Retriever Lifetime Study.

One source of hope is new and emerging treatments. At Flint, these include radiation therapy that targets tumors precisely and use of patients’ genetics to predict the effectiveness of various chemotherapeutic drugs. The cancer center has a stand-alone unit for clinical trials, with 20 to 30 trials conducted annually.

“It’s an opportunity for owners to think about how they can contribute, going forward, to new innovations in health care for pets as well as for people,” Dr. Page said.

He said studies of treatments for certain cancers in companion animals better predict safety and efficacy for humans than do rodent trials.

Flint also offers a free consultation service for pet owners and general practitioners. Dr. Page said the service provides about 3,000 consultations annually, with inquiries coming from around the world. Information is available here.

“To me, a successful outcome is the clients at the end of the road, whenever that may be, are grateful and happy with the results, even it means three more days or three more years,” said Dr. Zachary M. Wright, an oncologist who treats patients and participates in clinical trials at VCA Animal Diagnostic Clinic in Dallas. 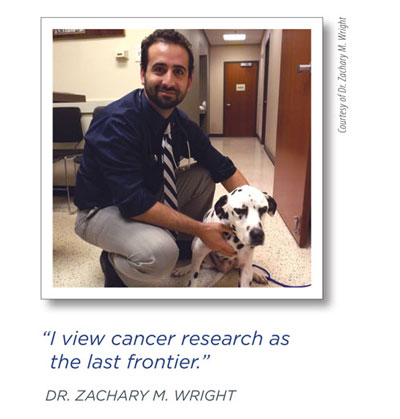 Dr. Wright has practiced in several locations and said his practice volume has increased everywhere he’s gone as more pet owners are willing to have a conversation about treating cancer in pets. He attributes their willingness to the growing number of pets living long enough to develop cancer, pets’ value as family members, and improvements in the availability and affordability of many treatments.

He said one of the coolest new treatments is drugs that target cancer cells precisely, in place of the sledgehammer approach of most chemotherapy. Among these drugs are two that have received approval from the Food and Drug Administration for treatment of mast cell tumors in dogs.

The ongoing shortages of chemotherapeutic drugs on the human side also impact the veterinary side, Dr. Wright noted. Recently, three of five drugs for treatment of lymphoma were on back order for three months.

Oncology is not a field with one right answer, he said, but a field that lends itself to creativity.

“I view cancer research as the last frontier. We’ve explored Alaska, we’ve gone to the moon, but no one is curing cancer yet,” Dr. Wright said. “I don’t think I’m going to be that person, but it’s really exciting to just play even a small part in this great process.”

On Oct. 29, Zoetis Inc. and the American Humane Association announced the launch of the Canines and Childhood Cancer study on the effects of animal-assisted therapy in pediatric oncology. The 14-month clinical trial comes on the heels of a pilot study that confirmed the feasibility of conducting a randomized controlled trial involving therapy dogs in multiple settings.

“We strongly believe in the human-animal bond and its therapeutic power,” said Vanessa Mariani, Zoetis director of academic and professional affairs. “Our goal is to advance the understanding and adoption of animal-assisted therapy in the treatment process, and to inform the care of these wonderful animals, through groundbreaking, sound research—while hopefully improving pediatric cancer treatment for both children and their families.”