By Greg Cima
The Food and Drug Administration is giving drug companies three years to end the use of many antimicrobials to promote livestock growth or similarly improve production.

Although agency officials said they are asking that pharmaceutical companies voluntarily eliminate such uses for antimicrobials that are deemed important for human medicine, they announced in December 2013 that they will consider regulatory action against those who do not comply. With pharmaceutical industry cooperation, antimicrobials considered important for human medicine could be administered to livestock only to treat, control, or prevent a specific disease, and would be distributed only through prescriptions or veterinary feed directives, which are similar to prescriptions.

On Dec. 11, 2013, the FDA gave pharmaceutical companies 90 days to tell the agency whether they will comply with the request. Michael Taylor, FDA deputy commissioner of foods and veterinary medicine, said that, between the 90-day deadline on March 12 and the three-year removal deadline, the agency will evaluate drug industry participation and decide whether to start regulatory proceedings.

The FDA provided a list showing that the change would affect about 290 drug approvals used in making 420 products.

“I want to emphasize that what’s voluntary here is only the participation of animal pharmaceutical companies,” Taylor said. “Once these labeling changes have been made, animal producers will only be able to use these products with therapeutic reasons with veterinary oversight.

“The two companies that hold the majority of these approvals, Zoetis and Elanco, have already declared their support and commitment to voluntarily removing these production claims from their products.” 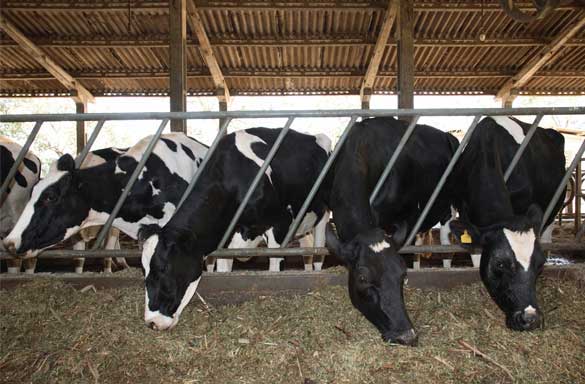 Both companies issued statements confirming that they support the changes planned by the FDA.

Dr. William T. Flynn, deputy director for science policy in the FDA Center for Veterinary Medicine, said most of the antimicrobial uses targeted for changes involve products administered to livestock through feed. About 25 companies own the affected drug approvals, which cover products such as tetracycline, penicillin, and macrolide drugs.

But Dr. Flynn said antimicrobials in some drug classes, such as ionophores, will remain available over the counter, because they have no clinically important uses in human medicine.

Dr. Flynn also said that the three-year phase-out period is partly intended to give agriculture industries time to adjust their production methods as they move away from the use of affected drugs and develop alternatives to antimicrobial use.

The FDA announced the changes with the publication of a guidance document, Guidance for Industry No. 213, on how the agency wants drug companies to ensure antimicrobial products are used appropriately in food-producing animals. The agency had published a draft version of the guidance document in April 2012, along with a final version of another antimicrobial use document, Guidance for Industry No. 209, which provides more information for agriculture industries.

Along with the new guidance document, the FDA published proposed changes to the rules governing veterinary feed directives. Those changes are intended to give veterinarians more flexibility in issuing VFDs.

Rather than requiring a veterinarian-client-patient relationship to issue VFDs, the proposed rules state that veterinarians must issue them in compliance with state and professional requirements. In addition, the FDA would remove an automatic drug categorization rule that otherwise could obstruct the supply chain, and the agency would reduce the amount of time veterinarians and others must keep VFD records from two years to one.

Dr. Christine Hoang, an assistant director in the AVMA Scientific Activities Division, said the AVMA appreciates the FDA’s efforts, intentions, and considerations in its efforts to increase veterinarian oversight of antimicrobials.

“We are fully supportive of this move from over the counter to VFD,” she said.

The FDA is accepting comments on the VFD rule changes under docket number FDA-2010-N-0155 here.

Taylor said the agency is working to preserve the effectiveness of antimicrobials important to human medicine.

The guidance documents together indicate that the FDA increased the rigor of its evaluation of antimicrobial resistance risk as it has received more information on that risk, and noted that some drugs approved in past decades were not evaluated in light of today’s considerations. The FDA has not approved any over-the-counter antimicrobial uses in livestock since 1993, with the exception of generic versions of existing drugs.

The FDA is starting with a voluntary approach in the belief that cooperation will provide the fastest, most efficient method of removing uses that increase the risk of antimicrobial resistance development, as opposed to the years of product-by-product proceedings that would be needed to withdraw hundreds of drug approvals, Taylor said.

Dr. Richard A. Carnevale, vice president of regulatory, scientific, and international affairs for the Animal Health Institute, which represents pharmaceutical companies, said the FDA’s plan has been mistakenly characterized as a voluntary effort.

“Guidance documents are the tool FDA uses to tell industry how the agency expects things to be done and can only be ignored by companies who don’t want to get products through the agency’s approval process,” Dr. Carnevale said.

Organizations such as the Johns Hopkins Center for a Livable Future have indicated that, rather than issuing voluntary guidance, the FDA should use its regulatory authority to prohibit production and disease prevention antimicrobial uses.

He said he would expect pressure from within the pharmaceutical and agriculture industry on holdouts. Those holdouts also would risk receiving the “wrath of FDA,” he said.

Dr. Carnevale said the AHI and its member companies intend to cooperate on labeling medically important antimicrobials for use in livestock only for therapeutic purposes.

Taylor said changes in the markets for animal products also provide an incentive for pharmaceutical companies to comply with the FDA’s plan. He cited policies by retailers such as McDonald’s and Kentucky Fried Chicken that favor eliminating production-based uses of antimicrobials important for human medicine.

Proposal calls for changes in antimicrobial use (Jun. 1, 2012)