Story and photos by Greg Cima

Alexis Solis removes her stethoscope and leans her head close to Lady Red, a 5 1/2-year-old Beagle.

Jason Broom, a prisoner at Dixon Correctional Institute, watches from across an examination table in the prison’s animal shelter as Solis, a veterinary student, listens to wheezing when the Beagle inhales. During the examination, he describes the treatment regimen he has been giving Lady Red for heartworm infection, anterior uveitis of unknown origin in the dog’s remaining eye, and digestive difficulties.

Solis is one of four fourth-year students from the Louisiana State University School of Veterinary Medicine who, under the supervision of Drs. Wendy Wolfson and Brandy Duhon, examined and, in some cases, prescribed treatments for 13 dogs and one cat during a mid-October morning at Pen Pals, a no-kill animal shelter inside the Dixon institute in Jackson, La. The visit to the prison is part of LSU’s clinical animal shelter rotation.

While Solis and fellow student Lauren Dubuc listened to Lady Red’s breathing, Dr. Wolfson jokingly suggested avoiding a deep search for more problems in a dog that has had so many. Broom replied, “We need to try to find something right with her.”

LSU students and faculty have taught Broom how to provide daily care for Lady Red, including administering heartworm treatment, medicated eye drops, and antibiotics. He loves animals, and, at that time, was responsible for 16 of the dogs in Pen Pals, where he has worked during its three years in operation.

“While I was incarcerated, I felt like this would be the best way to spend my time: to learn something about my passions,” he said.

The best care with limited resources

Dr. Wolfson, the instructor in charge of LSU’s shelter medicine program, is trying to produce veterinarians who will give the best clinical care with limited resources and will want to work in animal shelters, in a program that she hopes will reduce recidivism among inmates. Pen Pals is among more than 30 shelters in the region that participate in LSU’s shelter medicine clinical rotation.
“Those inmates truly have the nicest shelter that we go to,” she said. She added that it is clean, the animals receive great attention, and the record keeping is “wonderful.”
Most of the inmates working in the shelter are meticulous in identifying health issues and changes in the animals under their care as well as in administering treatments prescribed by the students, Dr. Wolfson said. Some of those inmates recently identified Demodex infestation in a dog, collected skin scrapings, and prepared a slide sample for
Dr. Wolfson’s confirmation.
“It is amazing what they are capable of doing, and it’s all because our students have taught them,” she said.
At Dixon, six prisoners work with, and learn from, LSU students. Four others in the program have been released, said
Col. John C. Smith, who has supervised operations at the shelter since it opened in August 2010. Several hundred dogs and cats have been adopted from the shelter during that time.
The prison first accepted stray and displaced animals following Hurricane Katrina, when about 270 dogs, cats, and farm birds were housed in a barn on the prison grounds.

Shelter through normal and difficult times

Bernard Unti, a senior policy adviser for the Humane Society of the United States, said the HSUS gave $600,000 to Dixon to build the shelter as part of a multimillion-dollar effort to improve the animal care infrastructure in Louisiana and Mississippi following Katrina.
“What we actually gave them the money to construct there was not only a holding facility and a clinic for basic animal care but also a facility that could serve in future emergencies as kind of an emergency overflow shelter and function within response plans of state and federal agencies,” Unti said.
That emergency capacity was used during Hurricane Gustav in 2008, when animals were moved to Dixon from an animal shelter southwest of New Orleans, according to the HSUS.
The HSUS also gave LSU $800,000 to establish the shelter medicine program.
The shelter today comprises the adoption center, a pavilion with cages, a few agility obstacles, and a habitat built for turtles confiscated from a hoarder.
Pen Pals is the only animal shelter in East Feliciana Parish, an area of about 450 square miles with 20,000 residents.
Yet, Smith noted that the shelter can accept limited numbers of animals, because it is funded only by grants and donations and because many of the cages in its open-air pavilion are intended for use as emergency housing when animals are evacuated from coastal areas.
The facility is not supposed to take more than 52 dogs, for example, even though it often does—particularly outside hurricane season. The animal population typically includes about 60 dogs and 15 to 30 cats, Dr. Wolfson said.

Praise for the caregivers

During the mid-October visit, the students circled a small table and took turns leading examinations and announcing their thoughts and findings for Dr. Wolfson and Dr. Duhon, a fellow in the LSU shelter medicine program. Prisoners held the dogs or stood nearby to answer students’ questions about medical history and observations. Other prisoners working in the building sat nearby with the next dogs up for examination, ran for towels or other supplies, or watched the examinations.

Afterward, Solis said it was clear that the prisoners cared about the animals, and the shelter work was not just a job.  She was particularly impressed by one inmate’s request for more information on how to determine a dog’s age.

One of the rotation’s previous participants, fourth-year student Ashley Gagne, who visited the prison in September, similarly said the inmates who care for the animals at Dixon were helpful and knowledgeable, and provided better deworming and vaccination than did many other shelters.

“They went into great detail about any observations they made on the progress or decline of their animals’ conditions, and their concern was always obvious,” she said. She later also said the shelter “has clear benefits for the animals and also appeared to bring the prisoners enjoyment and a strong sense of responsibility.”
Most students in the shelter rotation visit the prison once, although some visit twice or not at all.
Dr. Dana Finney, a volunteer who has spayed and castrated dogs and performed other surgeries on the Pen Pals animals over the past three years, also said the shelter is one of the best she has seen. The inmates dote on the animals, spending time training them, playing with them, and generally providing attention, and their clinical skills improve with every visit, she said.
While the inmates are caregivers for the animals, Dr. Finney said her interaction with the inmates feels more like working with veterinary clinic staff than with clients. They are sensible, careful, and knowledgeable, she said.
In a tour of the shelter, Master Sgt. Kevin Tanner had told the students that the inmates they would work with are trained in tasks ranging from animal restraint to providing anesthesia in preparation for surgery.

“They do everything but cut,” he had said.

Dr. Wolfson said some prisoners working in the shelter may have been convicted of serious crimes, but she typically does not know why each is in prison.
“I don’t ask them, and I don’t care,” she said.
But she tells students to dress in a conservative manner, stay together, and tell the group if they are going to leave the examination room. Smith likewise said that, while the shelter is a good place to work, he keeps in mind that it is within a prison, and the workers are inmates. 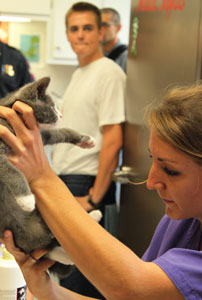 Dixon limits which prisoners can work in the shelter, requiring an excellent conduct record and willingness to learn, and prohibiting participation by those convicted of sex-related crimes, Smith said. The program has taught
participants patience and showed them the benefit of giving of themselves.
“It humanizes them tremendously, makes them realize that there’s more in the world than just themselves,” Smith said.
Inmate James Ziegler said he helped with construction of the building, started working at the shelter when it opened, and, today, helps with duties ranging from bringing animals into the facility to monitoring the heart and respiratory rates of animals anesthetized for surgery.

555A certificate hanging near the shelter’s front door also states that Ziegler has completed veterinary assistant and animal care training from a distance learning institution.
LSU veterinary student Lauren Dubuc
examines a cat.
Ziegler previously worked on the prison farm, and he wants to work again with large animals—particularly horses or cattle—once he is released in 2017. He is serving a nine-year sentence for a robbery related to drugs, he said.
Ziegler can shoe and break horses, and he may try to work on a large ranch, starting over elsewhere in the country.
Unlike other parts of the prison, Ziegler said, those working inside the shelter do not have to take on a “hard role” to avoid having other prisoners walk over them.

Jomo Carter groomed Boudreaux, a small, fluffy, white dog, before an examination. Carter, who also was convicted of drug charges, hopes to use the knowledge he has gained from the professors and students when he is released in 2016, possibly to continue grooming or otherwise working with dogs in New Orleans. He said he loves the program’s work to rehabilitate dogs and cats for adoption, even though he has become attached to a few of the dogs.

“I know it’ll be better for them to go to a home,” Carter said. ”Yeah, I’m kind of attached to them, so it’s a good thing to see them leave and a bad thing to see a dog that you’ve been around for a while get adopted.”
Broom, who was convicted of a drug distribution charge, said he would like to perform physical therapy work with dogs when he is released in 2016. He grew up with not only his family’s dogs but also the strays and pets that people brought to his house for help. His father is a laboratory technician in human medicine, and that connection to medicine led people to bring him animals if, say, their dog became ill or they found a sick snake.

Broom said he feels attachment to dogs that have been in his care the longest.

“You learn after a while not to get too attached to them,” he said. “You still hope they go to a good home.”
Unfortunate news about one of his wards arrived later in October. While Lady Red’s wheezing cleared within a day, Dr. Wolfson said test results showed the dog was positive for Brucella infection, and Lady Red was euthanized.