She’s just reached middle age and has been working in her field for more than a decade. She has an associate degree and makes about $35,000 a year working at a small animal private practice. Her benefits have been cut in recent years, but she still finds satisfaction with her job. She is the prototypical veterinary technician, according to survey results from the 2011 National Association of Veterinary Technicians in America, released earlier this year.

“Satisfaction rates are at an all time high with over half of NAVTA members saying that they are satisfied and will definitely stay in veterinary technology,” according to the survey, a rate that is 10 percent more than in 2007. This breaks the historic trend of technicians moving away from clinical practice, but such contentment wasn’t always the case. 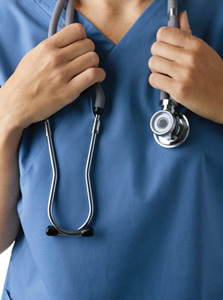 A 1991 AVMA survey of veterinary technicians reported that, when asked about their satisfaction, 27 percent of respondents indicated they may leave the field. When respondents were then asked to rate their agreement with the statement “Veterinary technicians are so underpaid that the feasibility of staying in the profession is declining,” on a scale from “strongly agree” to “no opinion,” more than 89 percent of respondents either strongly agreed or agreed with the statement (see JAVMA, Aug. 1, 1992, page 389).

The article’s authors voiced concern that continued attrition from the pool of working veterinary technicians would make the technician shortage even more serious.

The situation was dire back then. According to a survey by the AVMA Committee on Veterinary Technician Education and Activities, as of June 1992, a total of 1,015 technology program candidates had graduated that year and 626 had found employment as veterinary technicians. Yet, the total number of job openings on file was 4,391.

Shortages still exist, but not like there once were.

“We have seen a leveling off to where it’s hard to find a job out there. It’s kind of oversaturated, especially in bigger cities like Minneapolis-St. Paul, but there are needs in rural areas,” said NAVTA Executive Director Julie Legred.

She suggests that state and federal government incentive programs meant to encourage veterinarians to accept jobs in rural areas should include technicians as well.

“They’re doing a lot to promote veterinarians, but to recruit those individuals, they have to have a team to back them up, because less veterinarians gravitate to an area if they don’t have a support team. If it’s a single- or two-doctor practice, there will not be much incentive to work their butts off, especially for the wages in those areas,” Legred said.

Low pay continues to plague the veterinary technology profession, but to a lesser degree than before.

The mean salary for technicians has outpaced inflation rates in the past two decades and now is at $35,060, according to annual NAVTA surveys. Overall, technician salaries have gone up by 91 percent in the past two decades (from $18,350), but veterinarians’ pay has gone up 126 percent in the same time frame—from $28,924 in 1992 to $65,404 in 2012 among new graduates not pursuing advanced education.

Instead of leaving their profession, though, technicians are looking at alternatives in their field that offer better pay and career advancement, according to Lynn Reece, laboratory manager at the University of Georgia College of Veterinary Medicine.

“Technicians (at teaching hospitals) are utilized in a manner that they’re trained to be, and so it’s rewarding to go to a veterinary teaching hospital. Nothing against private practice, but that mindset is already there (at the VTH), and technicians tend to gravitate toward that. The same goes for referral practices,” she said.

The shift is evident when comparing the 1991 and 2011 NAVTA surveys. Figures show the percentage of technicians in companion animal practice decreased from 50 percent to 40 percent.

Benefits, too, are a big component of the shift, Reece said, especially as they have been declining for the profession in the past few years.

The 2011 NAVTA survey found that, although paid vacation, health insurance, free or discounted animal care, and paid time off are still the benefits most often provided by employers, they are provided less frequently than in past years. The same can be said of the following: retirement plans or pensions, time off for continuing education, and dental insurance. Each are provided to slightly more than half of technicians. In fact, paid time off for CE has dropped to 1995 levels, and paid work travel and lodging are dropping toward 1995 levels as well.

Of course, NAVTA is disappointed with the number of states that still have no licensure-type practice acts, as in, there’s no difference between a credentialed tech and a noncredentialed one, which we call an assistant. Our goal is to show the public in those states that there’s an entire nursing staff in the back of the clinic—many of whom have gone through two to four years of college and all of which had to take a national exam—and that bring a lot of knowledge to the practice.

Overall, Legred says the survey shows technicians are still happy with what they chose to do and are staying longer than before in their profession. Part of this might have to do with the fact that more employers are allowing technicians to work part time, which caters to those who have families and need more flexible schedules, she said.

Thirty-eight percent of technicians, in fact, work part-time, with a mean wage of $16.80 per hour, according to the 2011 survey.

Lopez said this trend mirrors what’s happening with veterinarians and other health professionals.

“While practice owners and full-time veterinarians are still putting in 50 to 60 hours, more and more DVMs and technicians are doing three- or four-day shifts,” Lopez said. “I’ve seen that paradigm shift in the past decade or so. That, I think, more follows the human nursing model, where you work three days and then have a few off.”

Part of the job

Animal nursing, client communications and education, and administration of anesthesia represent over 40 percent of a technician’s job function, with laboratory work, radiology, staff supervision, and other duties taking another 36 percent, the 2011 NAVTA survey showed. Supervision of staff, client communications, and teaching are the top activities that take up more of technicians’ time than in 2007.

“And although the number of mentions were small under the ‘other’ category, ‘developing protocols/guidelines and ensuring compliance’ and ‘going paperless’ were two topics that might bear monitoring,” according to the survey.

These trends attest to the transformative power technology has—and continues to have—on the profession.

Legred said, “A lot of practices use iPads in the exam room as part of history taking and use it for client education when going back into the rooms. Also, if they enter data in the exam room, techs can start gathering estimates and doing things that need to be done on the animal immediately, which transfers up front.”

Reece said technology has also meant more sophisticated monitoring systems for patients, which have increased the technician’s role along with them.

Lopez added that a great use for technicians has become managing the practice’s website and Twitter and Facebook accounts. The 2011 survey found only one-third of technicians working in a clinical setting are encouraged to communicate with clients via email or the clinic web page.

“I think that will steadily increase, especially, too, as more of the new veterinarians come out of school and are moving into practice ownership. They’re part of that generation, too, and are driving that (greater use of social media),” Lopez said.

Lopez compares credentialed technicians to registered nurses in human medicine in that they are both in charge of advanced tasks that require a lot of training.

“Of course, NAVTA is disappointed with the number of states that still have no licensure-type practice acts, as in, there’s no difference between a credentialed tech and a noncredentialed one, which we call an assistant. Our goal is to show the public in those states that there’s an entire nursing staff in the back of the clinic—many of whom have gone through two to four years of college and all of which had to take a national exam—and that bring a lot of knowledge to the practice,” Lopez said.

“Not only can they take tasks off the doctor’s hands and free them up to practice, but also, credentialed techs can talk to clients about all sorts of issues, like nutrition, behavior, and reproduction.”

The 2011 NAVTA survey showed 15 percent of technicians were trained not in school, but informally on the job. Credentialed technicians are almost evenly split, with one-third being licensed, one-third registered, and one-third certified, depending on the state.

Lopez acknowledges that there are many technicians trained on the job who have been practicing their profession for years and have a lot of knowledge and experience. He says NAVTA doesn’t want to involve them in practice act credentialing.

“Our concern is if you don’t have too much delineation in the practice act, it’s easy for a young person to be hired off the street and have certain tasks relegated to them that, perhaps, they shouldn’t be doing,” Lopez said.

“It’s frustrating, because these (credentialed) people have worked hard for their education, gone to conferences, and gotten continuing education, and yet, someone can get hired right off the street, and according to the law (in some states), can do the same advanced skills.”

The price of a good education

Technician education has come a long way since its inception and, by extension, so has the veterinary technology profession.

The first university-based program for training general veterinary technicians was developed in 1961 at the State University of New York at Delhi by a New York private practitioner, Dr. Robert Farrell. The program was called an animal technology training program, to avoid opposition by those who didn’t want the term “veterinary” associated with it.

It wasn’t until 1989 that the hard work of supportive veterinarians and newly graduated technicians, coupled with creation of two organizations—the Association of Animal Technician Educators (now the Association of Veterinary Technician Educators), founded in 1973, and NAVTA, founded in 1981—led to eventual AVMA acceptance of the term “veterinary technician,” according the winning essay of the 2013 Fred Smithcors Student Veterinary History Essay Contest by Jacqueline M. Paritte (OKL ’15). Originally, NAVTA stood for North American Veterinary Technician Association.

“From the sounds of it, we’ll be at 250 in the next couple of years,” Lopez said. “Because of that, the expectations have increased about the amount of knowledge the profession needs to have. Certainly, the (Veterinary Technician National Examination) has increased in both breadth and depth of knowledge, and so, everybody’s trying to keep up with that change in the profession.”

That includes the CVTEA. Student attrition used to be a big problem with many veterinary technology programs, but Legred said the CVTEA has played a big role in mitigating that by enforcing standards consistently and communicating their importance.

Veterinary technician education also has become more accessible, Reece noted. She remembers having to attend a program 225 miles from her home because, back then, Georgia had only two programs. Now the state has five.

“I wish (students) would move to where there is a cheaper version for them, but it’s convenient when it’s in their backyard, and the proprietary schools adjust to what your schedule needs to be,” Reece said. “It opens door for, maybe, students who wouldn’t be able to do it because of family and so forth, but will they be able to handle a $40K price tag?”

The answer remains to be seen, but Lopez, veterinary technician program director at the Pima Medical Institute in Las Vegas, is hopeful as he welcomes new students every year.

In particular, he’s encouraged by the attitude shown by incoming classes.

“With the millennial generation, they don’t necessarily see diversity; they just think of themselves as a community. They relate well to each other and embrace a lot of each other. I think that will naturally bring diversity in the profession,” Lopez said.