Needed for public health, despite constraints 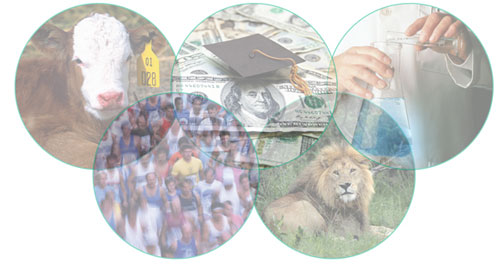 Dr. King, dean of The Ohio State University College of Veterinary Medicine, said the profession has evolved from caring for horses used in transportation and battle, to combating livestock epidemics that caused human famines, to improving agriculture and increasing the value of livestock, to, most recently, expanding pet care and providing specialty services. He expects the pending transformation will focus the veterinary profession on threats affecting humans, animals, and the environment as well as further expand its influence into areas such as global food systems, biomedical research, and conservation.
He issued a challenge to the audience. “Do we have the skill set, do we have the competency and the wherewithal, to take advantage of this and actually move this forward?” he asked.

But Michael Dicks, PhD, director of the AVMA Veterinary Economics Division, said the ability of veterinarians to take advantage of some opportunities in public health is stifled by educational debt that continues to grow as government support for universities shrinks.

Drs. King and Dicks delivered two lectures in a series, “The James Steele Challenge: A Better World Through One Health,” July 22 during the AVMA Annual Convention in Chicago. The lecturers described ways the veterinary profession can address public health challenges.

The series’ 100-year-old namesake, Dr. James H. Steele, worked as a sanitarian during World War II, studied zoonotic diseases for the federal government, developed the structure for many veterinary public health programs, and is known as the father of veterinary public health.
In a prerecorded video, Dr. Dicks said in his presentation that veterinarians have opportunities to expand their influence in public health, as they expanded their influence into new fields at other times when the profession underwent great change and had excess capacity. But the portion of university costs paid by all students, rather than state and federal governments, has risen from one-third to two-thirds in a decade, leaving many graduates unable to take advantage of those opportunities.

“Unfortunately, few Jim Steeles have come forward to embrace the opportunity to expand the area of influence of veterinarians by turning need into demand, and I suspect the large student debt has something to do with this,” Dr. Dicks said. “Like those in the past who were held captive by the company store, many veterinarians today forgo creative endeavors to pursue more traditional employment in an effort to pay educational loans.”
In April, the 2013 U.S. Veterinary Workforce Study commissioned by the AVMA indicated 12.5 percent of U.S. veterinarians’ capacity to provide services was going unused.

Dr. Dicks said college education is becoming a privilege rather than an affordable public good.

“For more than a century, federal and state governments supported public education, and the nation flourished as a result,” he said. “But recently, the focus on colleges and universities as job training centers rather than as institutions of higher learning has led federal and state governments to reduce their support. They reason that, because college graduates earn more than nongraduates, there’s no reason to transfer income from taxpayers to students—that the students or their parents should assume a larger burden for that education, because they’ll be earning more in the future.”
He said shifting the cost of education onto students is a reversal of the government funding of colleges that has allowed common citizens to gain education since the Morrill Act was passed in 1862, creating land-grant colleges.

Dr. Andrew T. Maccabe, executive director of the Associ­ation of American Veterinary Medical Colleges, said in an interview that the veterinary profession has a wide variety of opportunities, including some well-paying public health jobs, but it is fair to say that those less encumbered by debt are better able to take advantage of new and untested areas.

“It’s a truism that graduates will follow salaries, and educational debt certainly contributes to that,” Dr. Maccabe said.
The AVMA annual surveys of graduating fourth-year students together indicate that the mean educational debt among graduates with debt rose from $73,000 in 2002 to $152,000 in 2012, a mean increase of 7.6 percent yearly. Over the same period, the mean starting salary among those who had accepted employment increased from about $40,000 to $46,000. Those debt and salary figures are not adjusted for inflation.

Dr. Maccabe said veterinary colleges have experienced a steady decline in state support. Differences in how veterinary colleges report funding create difficulties in providing figures on the change, he said, but he noted that a 2012 National Science Foundation report indicates state financial support per student at 101 public research universities declined by a mean of 20 percent from 2002-2010.
A section of that report, “Science and Engineering Indicators 2012,” indicates state spending per student at such universities declined from about $10,200 to $8,200 in constant dollars, after adjusting for inflation and purchasing power. The report also states that tuition and fees for U.S. colleges have risen faster than the median income for at least 10 years, and tuition prices were expected to continue rising.

As indebted students pursue traditional veterinary practice, the need for veterinary resources in public health grows, yet remains unacknowledged, Dr. Dicks said. Unlike branches of the military, the public health service does not have reserves to help the U.S. combat multiple simultaneous public health threats.

Benefit of others’ good health

Dr. Juan Lubroth, chief veterinary officer for the Food and Agriculture Organization of the United Nations, said in the lecture series that demand for animal protein is increasing, as will the number of threats to global health. Veterinarians can save lives and livelihoods by helping to eradicate hunger and improve the efficiency of production, whether in stemming productivity losses from disease, helping restore environments, or improving waste management.

Yet, Dr. Joann M. Lindenmayer, an associate professor of public health at Tufts University, said public health topics such as epidemiology and biostatistics are getting short shrift in veterinary education. “We need to define animal health as an entree into what we do for human health, for environmental health, for public health,” she said.

The concept of interconnected health and medicine “has waxed and waned just as moons do and the number of veterinary schools do,” said Dr. Peter Cowen, an associate professor of epidemiology, public health, and population medicine at the North Carolina State University College of Veterinary Medicine. While the one-health concept is waxing, public health has much to accomplish, despite economic constraints, he said.

“Our horizon has never been more rich, nor have our possibilities really been greater or had more promise,” he said. “We have to be responsible, responsive, and relevant; we have to reimagine the deepest sense of who we are as a profession and, as professionals, what we do and how we spend our time.”
Dr. Dicks said public health has endless potential for those who would pursue work in the field with Dr. Steele’s zeal, and eliminating student debt would help such pursuits. While he said pessimists have called to reduce the output of veterinarians in response to the excess capacity described in the workforce study, he thinks Dr. Steele would see opportunities in the study results.
Student debt & financial assistance
Veterinary students
Public health