At its 2013 annual conference in Jacksonville, Fla., the Association of Avian Veterinarians held a full-day pre-conference session Aug. 3 on the medical, surgical, and husbandry aspects of backyard poultry.

“Traditionally, we’ve (seen) mostly parrots and pet birds, but it’s just a fact that most of our members have seen a dramatic increase in the number of individual chickens,” said Dr. Bruce Nixon, president of the AAV.

Dr. Tracy Bennett is one of a growing number of veterinarians who are being called on to treat backyard chickens. At the Bird & Exotic Clinic of Seattle, Dr. Bennett sees a range of birds, including a large number of backyard chickens—up to five a day. As an avian specialist, she enjoys treating all birds, whether “livestock” or exotic pets.

“The people that I work with are pet owners; they are sort of urban farmers,” Dr. Bennett said. “They are not selling their eggs. These are their pets.”

Even though Dr. Bennett’s office is nestled in a large, metropolitan area, she said her frequent interactions with backyard chickens and their owners are nothing new, but represent, in fact, a growing trend in her area.

“I’ve always seen chickens. I’ve been in practice 19 years, but it’s definitely escalated, maybe in the last five to seven years,” she said.

Veterinarians can indicate they provide poultry medicine services or look for colleagues who provide them on the AVMA clinic locator website. AVMA members can also access such information in the AVMA Member Directory & Resource Manual by logging on to the AVMA website.

Backyard chickens are found in urban as well as suburban neighborhoods. Some owners sell the eggs directly to the public, whereas others keep their chickens for a family egg supply—or have them foremost as pets.

A Department of Agriculture study of urban chicken ownership earlier this year examined four major U.S. cities—Denver, Miami, Los Angeles, and New York City—and found that at least 3 percent of households with more than 1 acre of property owned chickens. LA had the most, with 5.5 percent of such households owning chickens.

Boning up on chickens

Dr. Ray Cahill is getting used to seeing laying hens at his practice in Gloucester, Mass.
“I’ve lived in this area for eight years, been practicing here for six, and it wasn’t until I started practicing in this area that I really started to educate myself about chickens,” Dr. Cahill said.
Like Dr. Bennett, he receives calls about chickens that often involve egg issues and attacks by wildlife. He tries to educate owners on husbandry and troubleshoots to minimize problems.
While Dr. Cahill acknowledges that many companion animal practitioners may not be used to offering this sort of advice and treating chickens, he thinks most can handle it, if the situation arises in their area.
“I don’t think most veterinarians are aware of chicken medicine,” Dr. Cahill said. “But veterinarians are ready to respond to what the community needs are.”
Dr. Bennett hopes that is the case.
“I think it’s important veterinarians learn to treat these guys,” Dr. Bennett said.
“In the old days if your chicken wasn’t well, you went out back and cut its head off, but these days, these are pets to these people, so they want good care for them.”
Because of the bond with their chickens, clients even resort to surgery. Dr. Bennett said the most common surgeries they perform on chickens are celiotomy for reproductive problems such as yolk coelomitis, and repair of fractures and lacerations usually resulting from dog and raccoon attacks.
For veterinarians interested in building on their veterinary school knowledge of poultry medicine and husbandry, two members of the AVMA Animal Welfare Committee, Dr. Nixon of the Association of Avian Veterinarians and Dr. Jose Linares of the American Association of Avian Pathologists, collaborated on a featured article in the April 2011 AVMA Welfare Focus Newsletter. They developed the article in conjunction with the AVMA Animal Welfare Division.
The article, titled “Urban Chickens,” is available on the AVMA website. This practical overview provides many useful links to additional resources and publications.
The article cautions about zoonotic diseases of concern such as salmonellosis, campylobacteriosis, and exotic Newcastle disease as well as nonzoonotic diseases such laryngotracheitis. Additional areas of focus are behavioral concerns and providing advice to owners on breed selection, housing, disease prevention, and nutrition.
In 2002, certain areas of metropolitan LA had to be quarantined when exotic Newcastle disease was found in privately owned game fowl. The 2002-2003 California outbreak affected commercial poultry flocks and backyard chickens. Dr. Nixon said the prospect of infecting commercial poultry is a primary reason for poultry regulation.
“The state and the federal government really don’t care if you have a single bird in your backyard with infectious laryngotracheitis,” Dr. Nixon said. “What they care about is the danger that that bird poses to a commercial operation maybe 10 miles down the road, because if that one backyard chicken causes that county to become a quarantine zone, you’re talking millions of dollars’ worth of impact. It just becomes a nightmare.”
Dr. Nixon stressed the need for owners and veterinarians alike to be aware of municipal, county, state, and federal regulations placed on backyard poultry ownership. He recently researched and wrote a chapter on those regulations for an upcoming book on backyard poultry, using his home state of Texas as a regulatory example.
“Just in the state of Texas alone, I was never able to identify a single person who was able to identify all of the regulations across the board that affect poultry, and I was informed it probably doesn’t exist, that person,” he said. “It’s just too much for any one person.”
The book, “Backyard Poultry Medicine and Surgery: A Guide for Veterinary Practitioners,” was edited by Drs. Cheryl B. Greenacre and Teresa Morishita and is due to be published by Wiley in late 2013 or early 2014.
The federal Egg Products Inspection Act exempts producers who keep fewer than 3,000 birds and generally doesn’t apply to backyard poultry owners who sell their eggs directly to the public rather than through retail outlets. Some states and municipalities may regulate egg sales and require permits, whereas others may exempt direct-to-consumer sales.

The University of Maine Animal Health Laboratory in Orono is the only site in its area offering diagnostic services for poultry and other livestock. Dr. Anne Lichtenwalner, director, said the laboratory is aimed at helping both veterinarians and livestock owners.

“I’ve been here five years, and the way I interpret this is that we need to build even more the strength of our food animal vet expertise, and we need to help them build their practices, or else they won’t stay in practice. It won’t be feasible,” Dr. Lichtenwalner said. “We also have a primary objective to meet the needs of the livestock owners who are underserved.”

The laboratory performs diagnostic work and necropsies for animal owners and veterinarians who submit samples on a wide range of livestock, especially small ruminants and poultry, and on occasional wildlife species when requested by the state’s Department of Inland Fisheries & Wildlife. The lab also tries to find veterinarians willing to treat livestock for owners looking to establish a veterinarian-client-patient relationship.
Dr. Lichtenwalner said this diagnostic service is needed, because food animal practitioners are scarce and the ones that are practicing are unevenly distributed. Some companion animal veterinarians are able to help, but finding them is a struggle for some livestock owners.
“I get phone calls from people with flocks all the time, and my first question is always, ‘OK, who is your vet?’ and at least 80 percent of the time, they don’t have one or they are frustrated because they can’t get them to come out,” Dr. Lichtenwalner said. “So what I try to do is link them either via a consultation or even a farm visit to a vet who might be willing to do some farm animal work.”

The laboratory offers these services to agricultural producers in the region and nationally as part of the University of Maine Cooperative Extension system. Each state or U.S. territory has an extension office at its land-grant university and a network of local or regional offices. Experts staffing these offices provide information to agricultural producers, small business owners, consumers, and others in rural areas and communities. The network is accessible here.
The Purdue University College of Veterinary Medicine now even offers a fully endowed teaching program in poultry medicine. Dr. Patricia Wakenell, an associate professor of avian diagnostics, said on Purdue’s website, “With the rise in popularity of the general public running hobby farms, there is a lack of knowledge and skills needed to address the health and wellness of poultry and other livestock.” One of the goals of the program is to graduate a poultry veterinarian every year. 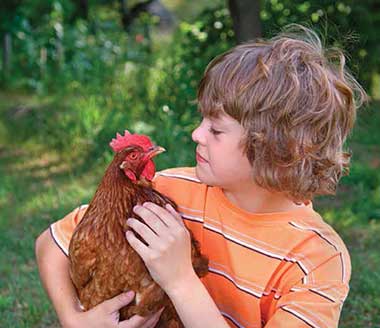 Protecting the food supply in microcosm

Dr. Lynne White-Shim, an assistant director in the AVMA Scientific Activities Division, said veterinarians have called in with questions that speak to their awareness that even backyard chickens are food animals, subject to the same regulations as those in production agriculture.
“They tend to have clients who have two to 20 owned pet chickens and go to great lengths for their chickens, including blood work, radiographs, and surgical procedures,” Dr. White-Shim said.
“But, the clients also apparently want to sell the eggs, so when it comes to using antimicrobials and other drugs in these

chickens, the veterinarians ask what they can and can’t use. They want to give good care but also recognize the need for adequate withdrawals and proper use of drugs for pain control, parasite control, and antimicrobials. They don’t want to risk the food supply over the care of these chickens.”
For example, there are no approved drugs for treating cancer in chickens.
A veterinarian asked her about putting allowable drugs into an oral form so his client could safely treat the chickens. Dr. White-Shim suggested veterinarians ensure they are following the FDA’s extralabel drug use rules when treating patients, particularly when it comes to food animals. The AVMA has a helpful algorithm that veterinarians can follow when contemplating use of drugs in an extralabel manner.
Dr. Kim May, an assistant director in the AVMA Communications Division, has nonveterinarian friends who own backyard poultry. They have asked her how to recognize illness and decide when they need to take a chicken to a veterinarian—and how to find one who will work with chickens.
They’ve asked how to get a local ordinance changed to allow backyard poultry, and about basic care such as parasite prevention, feeding, and protection from predators. What vaccines does a backyard chicken need? They’ve wanted to know what to do with chickens that are no longer laying, and about “home euthanasia.” She has taken those opportunities to educate them on basic husbandry and animal welfare.
And the rooster questions. “Some people think you have to have a rooster to get chickens to lay eggs, which is untrue,” Dr. May said. “But roosters are loud and can be aggressive, so they’re not desirable in a backyard setting. Sometimes, though, the owners get ‘surprised’ when one of the chicks they bought turns out to be a rooster.”
Under development is an AVMA web page on backyard livestock that will pull together veterinary and husbandry information by species. Veterinary student Kayleigh Ann Bull (IL ’15) worked on this project while serving in late spring as an AVMA headquarters extern with the Scientific Activities Division under Dr. White-Shim, with assistance from the Animal Welfare Division.
Joe Kaiser is a third-year journalism major at Marquette University and was a summer intern with JAVMA News. Susan C. Kahler contributed to the reporting on this article.