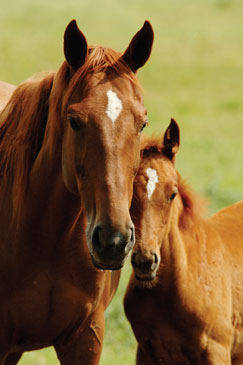 Horse industry leaders and public health officials are developing a proactive and coordinated approach to handle future equine disease outbreaks. The aim is to mitigate the health, welfare, and economic implications of these events for U.S. horses and the industry as a whole.

Disease outbreaks have cost the horse industry millions of dollars for the care of horses, for implementation of biosecurity, and in lost revenue in the form of canceled or restricted equine events, according an open letter to the horse industry from the American Horse Council and American Association of Equine Practitioners.
A few major outbreaks in recent years include the following:

As of early April of this year, according to Merial’s Outbreak Alert website, incidents of EHV-1 were occurring in California, Montana, Utah, Colorado, Florida, Tennessee, Illinois, Michigan, and New Jersey; Eastern equine encephalitis in 19 states; influenza in two horses in Oregon and Florida; and West Nile virus in every state except Alaska, Hawaii, and West Virginia. Moreover, since the beginning of 2013, outbreaks of equine herpesvirus myeloencephalopathy have occurred in New Jersey, Utah, Colorado, Florida, Illinois, Tennessee, California, and Quebec.

“The horse community is always just one step from a calamity and that calamity is a disease outbreak of such proportion as to widely imperil the health of our horses and threaten the economic viability of our industry,” according to the letter by Jay Hickey, executive director of the AHC, and Dr. Nathaniel A. White II, an AAEP past president. “The ever-present risk is due to the equine industry’s reliance on the timely movement of healthy horses for sales, breeding, racing, showing, work, and recreation. In this environment an infectious disease outbreak can result in federal or state restrictions on horse movement to stop the spread of the disease.”

The AHC and AAEP, along with members of the National Assembly of State Animal Health Officials and USDA APHIS Veterinary Services, are preparing a National Equine Health Plan that will outline the issues surrounding the prevention, diagnosis, and control of diseases and the responsibilities and roles of federal and state authorities and the industry. Envisioned as part of the plan is an industry-sponsored Equine Disease Communication Center to help coordinate and disseminate accurate information about equine diseases throughout North America.

This will be accomplished by creating a network of practicing veterinarians and federal and state animal health officials who can relay time-sensitive information through a central communication system. That way, reliable and updated information would be available to all segments of the horse industry in real time.

“In the current draft of the communication center proposal, veterinarians will not be asked to do anything different when reporting diseases. The goal is to have them report disease outbreak information to the EDCC for verification, and when the information is proved to be reliable, it will be distributed to the equine community,” Dr. White said.

The idea for the national plan first came about when the USDA and AHC held a workshop at the 2010 AHC National Issues Forum. Participants discussed how best to address, respond to, and control emerging and infectious equine diseases in the U.S. Afterward, federal and state animal health officials, the AHC, and the AAEP drafted an outline of the National Equine Health Plan.
Then, following the 2011 outbreak of equine herpesvirus myeloencephalopathy in Utah, Dr. White, then AAEP immediate past president, chaired an AAEP task force that worked on the communication module and biosecurity aspects of the national plan.
Recommendations from the task force were approved by the AAEP board of directors in 2012 and subsequently by the AHC board of trustees. They are as follows:

Next steps will be gaining acceptance by stakeholders, presenting a plan to state veterinarians, developing a budget for creating the Equine Disease Communication Center, and seeking funding from the industry. Another key component was hiring Dr. Rory Carolan as an equine specialist with the USDA APHIS VS to help to coordinate the role of the USDA in the National Equine Health Plan.

The priorities for the national plan and communication center will be presented at the AHC National Issues Forum, June 16-19, and attendees plan to discuss the creation of a working model of the center. Once a detailed plan is in place, Dr. White said they will need support and participation from all parts of the equine industry to make both a reality.
Equine veterinarians are asked to share their thoughts with the
American Horse Council and American Association
of Equine Practitioners
about essential components of the
National Equine Health Plan and the
Equine Disease Communication Center by emailing
info