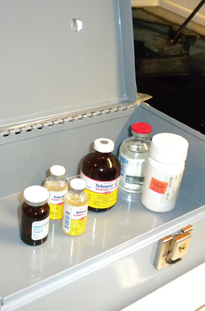 A bill introduced in April would let veterinarians transport and dispense controlled substances beyond the addresses they have registered with the Drug Enforcement Administration.

Officials with the DEA have said such practices currently are illegal.

Reps. Kurt Schrader of Oregon and Ted. S. Yoho, both veterinarians, are sponsoring  H.R. 1528, the Veterinary Medicine Mobility Act of 2013. Dr. Schrader introduced the bill April 12, and Dr. Yoho is a co-sponsor.

The AVMA worked with the offices of both legislators in drafting the legislation and is advocating for its passage.

Officials with the DEA have said that the Controlled Substances Act as passed by Congress requires that health care providers administer and store controlled substances only at the addresses listed on those providers’ registrations with the DEA. For example, a veterinarian could administer a controlled substance within a registered clinic, but, in most cases, would be breaking the law when transporting the drug or administering it off-site.

Dr. Schrader’s bill would amend the federal Controlled Substances Act to let veterinarians transport and dispense controlled substances “in the usual course of veterinary practice” outside their places of business registered with the DEA, provided that the veterinarians are dispensing the drugs within states where they are licensed to practice veterinary medicine.

Dr. Douglas G. Aspros, AVMA president, said the ability to transport controlled substances from registered addresses to patients is critical for veterinary practice. While the DEA has not historically enforced the prohibition against this practice, federal law does not let the agency promulgate rules that would let veterinarians transport such drugs.

“As a practitioner, it is always surprising to find that, when laws are passed, rules are made, regulations are promulgated, veterinary practice has not been taken into account,” Dr. Aspros said. “As a leader at AVMA, it reinforces my belief that, as an organization that gives voice to veterinary issues, AVMA is critical to the profession.”

In 2012, the California VMA had indicated that officials with a DEA office in Sacramento contacted veterinarians whose registrations listed their homes as their places of business and told them that a separate registration was needed for each place where controlled substances are manufactured, distributed, imported, exported, or dispensed.

Dr. Grant Miller, director of regulatory affairs for the California VMA, said in April 2013 that DEA officials have continued telling ambulatory practitioners in his state that it is unlawful to carry controlled substances. But he has not heard of any enforcement beyond those statements.

Dr. Miller said the California VMA was, in April, writing letters to members of Congress from the state to encourage them to co-sponsor, or at least support, the bill introduced by Dr. Schrader.

Dr. Schrader said he does not expect difficulty in passing the bill he introduced, but he also didn’t expect to need legislation. He said that need was upsetting.

“I thought a few calls to DEA and a letter about the preposterousness of their position would get them to change the rule for ambulatory veterinarians that practiced for a century and a half in this way,” he said.

Officials with the DEA have said that the Controlled Substances Act, as written, would not allow them to alter regulations in a way that would let health care providers transport and dispense controlled substances beyond registered locations. Such a change would require legislation.

Dr. Schrader disagrees. He said disallowing veterinarians to carry controlled substances in their vehicles would cause the livestock and equine industries to crumble. He also said those drugs are needed to provide humane treatment.