When livestock are brought to a slaughter plant today, they are less agitated, less often shocked with prods, and more likely to have a humane death than they were prior to the late 1990s, according to Temple Grandin, PhD. 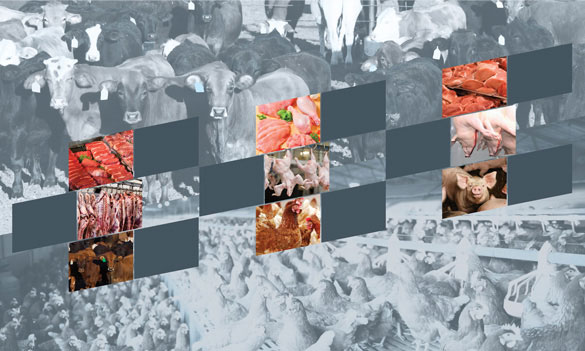 She saw the greatest change in late 1999 and early 2000, when she worked to implement animal welfare auditing programs at slaughter plants that supplied McDonald’s and Wendy’s.

“I saw more change happen in a six-month period than I had seen in my entire 25-year career prior to that time,” she said. She credited that shift to the desires of large retailers, which told their suppliers to fix welfare problems.

In the 2006 paper “Why Should I Know About Animal Welfare Audits,” Susan D. Eicher with the Livestock Behavior Research Unit of the Department of Agriculture’s Agricultural Research Service, indicated such retail companies initiated animal welfare audits and increased welfare standards starting in 1999 in response to activist campaigns, particularly the “McCruelty,” “Murder King,” and “Wicked Wendy’s” campaigns by People for the Ethical Treatment of Animals.

Dr. Grandin, who is a professor of animal science at Colorado State University, designer of livestock handling facilities, and author of animal welfare standards for the American Meat Institute Foundation, said conditions today at meatpacking plants typically support good welfare, and improvements continue even though some animals arrive at the plants in poor condition. Those animals often are old, lame, heat-stressed, or, when they are unaccustomed to close contact with humans, wild with fear, she said.

Just as retailers used their purchasing power to pressure meatpackers to meet the retailers’ welfare standards, Dr. Grandin expects that packers and processors will press for changes at the supplier farms.

“There’s going to be some pressure going back down the chain,” she said.

As that pressure has been coming down—from consumers to retailers to packers to farms—those buying meat and milk have been requiring suppliers to participate in a mix of programs intended to improve animal welfare.

In October 2012, Tyson Foods announced that the company was starting the Tyson FarmCheck Program to “personally audit the treatment of animals at the livestock and poultry farms that supply the company,” starting with some of the 3,000 farms that supply the company’s pork. In the announcement, CEO Donnie Smith said the company knows consumers want assurances their food is produced responsibly, and he expects the audits will verify that Tyson’s 12,000 livestock and poultry farmers are “the best in the world.”

“But, if we find problems, we want them fixed right away,” he said.

We can’t afford to do business with people who don’t understand our commitment and aren’t committed to the same values we are, and that’s a matter of choosing good people to do business with. And so, if a farm doesn’t meet our expectations in that regard and isn’t willing to try, then I think they will find themselves limited in their market access.

When the Humane Society of the United States announced in May 2012 that a member working at a Wyoming farm secretly recorded video of farm workers kicking and punching pigs, it also prominently stated that the farm was a Tyson Foods supplier. The HSUS also encouraged people to contact Tyson to discourage buying from that farm.

Dr. Jennifer B. Walker, director of dairy stewardship for Dean Foods, said her company wants to develop an animal welfare program that demonstrates dairy cow welfare is improving. Such a program ideally could be used throughout the dairy industry, rather than give one company a competitive advantage, she said.

But she also said it is unfair to expect that the best producers will carry the water for those uninterested in doing what is best for the dairy industry.

“We can’t afford to do business with people who don’t understand our commitment and aren’t committed to the same values we are, and that’s a matter of choosing good people to do business with,” Dr. Walker said. “And so, if a farm doesn’t meet our expectations in that regard and isn’t willing to try, then I think they will find themselves limited in their market access.

“They may have markets with somebody else, but again, folks who have a brand at stake can’t afford to do business with those who want to put us at risk.”

Kathi Brock, director of the American Humane Association’s Humane Heartland welfare audit program, said Americans are increasingly asking not only whether food is produced under conditions they accept but also whether the auditors backing the food producers are credible. Retailers are increasingly demanding that farms submit to third-party welfare audits.

“They do not want to have a recall based on poor health in a herd or flock, and they assume that (with) the credibility of the American Humane Association, putting our name and our legacy behind the label, that they can be assured,” she said.

“But what they have said is, ‘The way we are doing things is not ethically correct, it’s not scientifically verified, and it’s socially unacceptable, and we’re not going to be able to continue to do business that way,’” she said.

Because of the cost of participating in the United Egg Producers Certified program, fewer egg producers likely would seek certification if fewer retail and food service companies required it, according to Gene Gregory, who was president and CEO of the UEP until Jan. 1.

“On the other hand, we also know that there are producers that are so proud of the fact that they have implemented this program that they would say to you, ‘We would never go back to where we were before, even if we didn’t have to do this,’” Gregory said.

Gregory noted that the UEP program has been endorsed by restaurant and grocery trade organizations, and 85 percent of eggs produced in the U.S. come from participating farms.

Birds owned by participants look and live better as well as produce more eggs, Gregory said. He has seen improvement, for example, as many egg producers have installed conveyor belts that catch and remove hen manure, preventing it from falling onto other birds and improving air quality.

“It made a major difference in the housing and welfare of the birds,” Gregory said.

In addition to third-party audit programs, other welfare-related educational and industry benchmarking programs are being voluntarily adopted by farms or required by meatpackers and milk processors.

About 70 percent of milk produced in the U.S. comes from dairies participating in the National Milk Producers Federation’s Farmers Assuring Responsible Management program, the organization announced in March 2013. Betsy Flores, senior director of animal health and welfare for the NMPF, said the program primarily gives retailers assurances from cooperatives and processors, which use program data to show what practices are used by their suppliers.

The program was started in 2009, and Flores said data collected so far have provided a baseline rather than shown whether participation is connected with improvements. But the data point to some areas where dairies could improve, she said, citing the 2013 annual report that indicates only 68 percent of participating dairies applied antiseptic on calf navels after birth, and only 80 percent had established veterinarian-client-patient relationships.

“As farms go back for that second evaluation within the program, that’s when we’ll start seeing whether or not we’re having an impact on improving animal care on the farms,” Flores said.

Sherrie Niekamp, director of animal welfare for the Pork Checkoff program of the National Pork Board, said most major meatpackers in the pork industry are requiring that swine producers participate in the Pork Quality Assurance Plus certification program. The program is intended to identify needed industry improvements, and advisers who perform site assessments tell producers how their farms compare with expectations and what areas could be liabilities.

Dr. Lisa M. Tokach, a member of the AVMA Animal Welfare Committee and the American Association of Swine Veterinarians Pig Welfare Committee, said the PQA program gives those who embrace it tools to improve welfare and operations. For example, she has shown farm employees that they can move swine through barns and onto trucks more quickly and without electric prods by changing lighting and bringing five or six through at a time rather than 20.

Dr. Grandin said the improvements made in animal welfare need maintenance. Standards work if they are as clear and measurable as traffic rules, and she likened auditors to police who enforce speed limits.

“The advantage of measuring it is then you don’t creep back into bad habits,” Dr. Grandin said. “It’s just like police have got to measure speed, because if you didn’t measure it, people would be going 60 miles an hour past their high school.”

Dr. Walker said Dean Foods would like to see the entire dairy supply chain participate in an audit program that measures factors such as lameness and health, evaluates success on the basis of demonstrated efforts, and holds suppliers accountable for some basic, critical considerations such as properly handling nonambulatory cows and ending the practice of tail docking.

“We need to be able to demonstrate to people that we are trying and we are concerned,” Dr. Walker said.

On the other hand, she said, “window dressing” programs, or those that fail to give evidence that participants are making changes, can raise consumer expectations only to have them fall short. She said, “They’ve been focused on a message and what people want to hear, and, I think, if we take the approach where we want to do what is best for the cow, everything else will fall into place.”