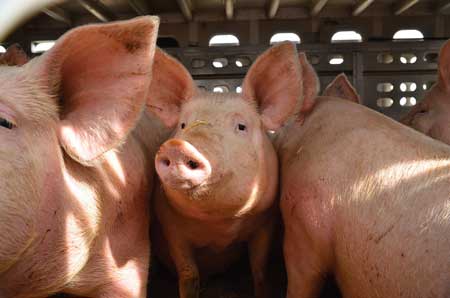 Veterinarians’ roles in swine production are evolving with the swine industry, but their overall purpose remains the same, Dr. Craig J. Rowles said.

“We’ve had to adapt our practices to the changing needs and expertise of our clients in order to provide relevance, information, and assistance,” Dr. Rowles said. “But even with all of those changes, the one thing that has been ever-steady is our purpose, in that our purpose is to serve the needs of our clients and society in general, as is stated in our oath.”

He noted that the pork industry is continuously changing, with improvements in areas as varied as genetics, nutrition, and housing ventilation. Because of this, veterinarians working with the industry are pulled in multiple directions, and Dr. Rowles said that it can be good for veterinarians to step back from their daily travails and consider whether they still have a passion for the work.

Dr. Rowles, who previously worked in a mixed animal practice and now raises his own pigs in Carroll, Iowa, delivered that message during the keynote speech, the Howard Dunne Memorial Lecture, for the 44th Annual Meeting of the American Association of Swine Veterinarians as well as in a later interview with JAVMA. The association hosted the meeting March 2-5 in San Diego.

The AASV meeting drew about 620 paid attendees and about 1,040 total attendees, including more than 700 veterinarians, according to Dr. Tom Burkgren, AASV executive director. The meeting’s organizing committee aimed to provide technical information that veterinarians could use almost immediately after the last sessions ended on the Tuesday of the meeting, he said.

“We want to give every attendee something that they can take home on Wednesday and put to use on Thursday,” he said.

Dr. Matthew S. Anderson of Algona, Iowa, who became AASV president during the meeting, said the attendance showed swine veterinarians are engaged with the association, and he hopes the meeting was inspiring.

”If you can’t come home from a conference like that inspired to do a little bit more and, hopefully, having learned something you didn’t know, I don’t think you were really paying attention,” he said.

Dr. Anderson expects the AASV and the swine industry will, in the coming year, endure ongoing disagreements with advocacy groups over pig care, and he said swine veterinarians need to speak for pigs and pig owners as well as advocate on the basis of scientific evidence on animal care and welfare. He also expects that, since North America has become a net exporter of pork, foreign animal disease will be a greater concern than in the past because of the potential damage that an outbreak could cause through trade restrictions.

While veterinarians and their clients have made progress in fighting a costly domestic disease—porcine reproductive and respiratory syndrome—he said it remains an expensive threat to the industry.

Dr. John A. Korslund, an epidemiologist for the Centers for Epidemiology and Animal Health in the Department of Agriculture’s Animal and Plant Health Inspection Service, told meeting attendees that the state and federal diagnostic laboratories involved in federal swine influenza virus surveillance have tested about 24,000 samples that came from some 6,600 submissions from October 2009 through January 2013. About 2,400 of the submissions were positive for swine influenza, and about 1,100 have yielded virus isolates so far. Those figures could rise as remaining submissions are tested.

In an interview after the meeting, Dr. Korslund cautioned that federal swine influenza surveillance figures cannot be used to accurately measure disease prevalence by time, location, or subtype, because the surveillance is voluntary, passive, and largely anonymous. In more than nine out of 10 cases, an incident of disease is identified only by the state where the samples were collected. Even the state-level data can be skewed, depending on local participation, and are subject to misinterpretation, he said.

But the submissions are helping the USDA reach its goals of updating diagnostic tests and giving vaccine producers information on vaccine virus candidates, Dr. Korslund said. The results can also help veterinarians and farms track influenza changes on their farms, even if they choose to remain anonymous in the federal surveillance program.

Dr. Korslund noted that diagnostic laboratories participating in the surveillance program have genetically sequenced swine influenza viruses from about 1,300 samples and that recent work by the USDA Agricultural Research Service indicates that some H3 swine influenza viruses are becoming more diverse, causing difficulties in infection control.

“It takes genetic sequencing information for researchers to start to assemble this information and make sense of it—and, hopefully, lead toward improved vaccines or at least improved diagnostics for what’s going on in the national swine herd,” he said.

On the final day of the meeting, the AASV Board of Directors voted to support a position of the National Pork Board that, by 2015, packers require as a condition of sale that all market breeding swine should be individually identified with a USDA-approved premises identification number when sold. Information from the National Pork Board indicates adequate identification of such swine can reduce the risks of disruptions from investigations into the sources of animals, animal movement restrictions, and disease outbreaks.
Swine
Animal welfare