This year marks the 50th anniversary of “The Feminine Mystique” by Betty Friedan, the classic feminist text that defined “the problem that has no name”—the purported widespread unhappiness of women in the 1950s and early 1960s. The book encouraged women to find meaningful work that used their full mental capacity.

How have things changed for women and mothers since then? 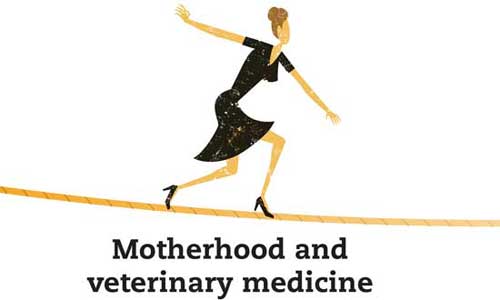 Notably, the share of American families with children that have a male breadwinner and a female homemaker dropped from more than half in 1975 to just one in five in 2011, according to the Center for American Progress.

Looking at the veterinary profession, in 1963, there were only 277 female veterinarians in the U.S. Comparatively, during the 2012–2013 academic year, women represented 78.6 percent of veterinary students enrolled in the United States. And as of 2012, 54.1 percent of the profession was female.

Clearly, any barriers that kept women from entering veterinary medicine have been removed, but women continue to face additional challenges, compared with their male colleagues.

Given the often long hours, physically demanding tasks, and responsibilities associated with being on call, balancing family and work responsibilities can be difficult, particularly for women working in smaller practices.

Another on the way

Dr. Elizabeth Chosa (GA ’05), owner of Courtenay Animal Hospital on Merritt Island, Fla., is one of those trying to make it all work. She is a solo practitioner who bought her clinic in March 2012 and is working at growing her client base. She and her husband, Pete, have a 2-year-old daughter, Mary Belle, and Dr. Chosa is pregnant with their son, who’s due in May.

“I am very fulfilled, both as a mom and as a vet. I don’t have much time to do things for myself, and I’m sleep-deprived, but right now, the small sacrifices are absolutely worth it. I’m doing the best I can to have a good balance and I don’t think my family or my practice has suffered much,” she said. “My time with my daughter is limited, but that makes it more precious to me and in some ways, makes me a better mom.”

Dr. Chosa admits that part of the reason she is able to be a practice owner is that she also has a full-time nanny. She also says a supportive husband and good staff have made a big difference, as has the timing for having her kids and becoming a practice owner.

“I think being in my 30s definitely helps, too. I have enough energy to work hard at the hospital and still spend quality time with family. I am also old enough to really value all of these opportunities, and I don’t take much for granted,” Dr. Chosa said. “In some ways, owning a practice certainly makes it harder, because there is more responsibility. At the same time, I think I would have to sacrifice more with my family as an associate veterinarian, because I wouldn’t have as much flexibility.”

For example, she intends to insert breaks in her schedule after the baby comes to make time for nursing. The child will also be able to play and sleep in a separate area in the practice, allowing Dr. Chosa to spend more time with him.

She said she’s always wanted to be a mother but didn’t always have ambitions to be a practice owner. That came after working for other practices and deciding she wanted to practice her kind of medicine, her way, and create a culture within the clinic for how her staff takes care of clients.

Women practice owners are different than male practice owners. It’s not better or worse, but we tend to give too much of ourselves to everything. Trying to do that for your family and your practice leaves little in the tank for your personal needs.

Of course, it’s that drive that can be a positive and a negative for Dr. Chosa, and women in general.

“Every working mom, regardless of the profession, feels guilty both at work and home,” she said. “I still work later than the staff, but I always feel like I should be home earlier and I should stay at work later, and you can’t do both.”

She continued, “Women practice owners are different than male practice owners. It’s not better or worse, but we tend to give too much of ourselves to everything. Trying to do that for your family and your practice leaves little in the tank for your personal needs.”

Dr. Wendy Hauser (OKL ’88), a small animal practitioner at Coal Creek Veterinary Hospital in Centennial, Colo., is on the other end of the spectrum. She has two older kids, Andrew, 18, and Elizabeth, 16, with her husband, Edmond.

Dr. Hauser sold her practice in 2008 but as the clinic’s managing veterinarian, retains responsibility for the culture and medical policies of the practice and for mentoring staff veterinarians.

Those first few years as a new mom and a veterinarian brought a number of trials for her family. She and her husband relocated from Pennsylvania to Colorado for his job when their son was 7 months old.

“There were challenges with that. We had six weeks to make the move happen. Finding reliable child care in an area where we didn’t know anyone was tough,” she said. Fortunately for her, Dr. Hauser’s new boss and his wife proved to be a helpful resource.

Then, in 1997, when she was pregnant with her second child, Dr. Hauser had preterm labor, resulting in her quitting her job and going on bed rest.

Fast-forward a year to Dr. Hauser opening her own practice; the kids were 3 years and 8 months at the time. Her mother came for three months to help with the transition. After that, Dr. Hauser and her husband tried using an outside care provider but later hired a nanny. This afforded them greater peace of mind on days when the kids were sick or she and her husband were delayed at work, which was often in those early years. Dr. Hauser worked six days a week the first 19 months, because she couldn’t afford to hire any employees.

She said she’s glad to have a life partner who works with her to achieve their goals. She also says being a practice owner allowed her flexibility, freedom, and a job that provided many benefits.

“Once we started hiring associates, then I could work part time, so then I got to be in the kids’ schools when they were in grade school,” said Dr. Hauser, who taught a veterinary electives class twice a week to grade school children.

Currently, she works 30 hours a week, and recently, she was elected to the American Animal Hospital Association board of directors.

She said her daughter once asked her if she had any regrets in life.

“I said I have one, and that is, I would have loved to spend more time with them when they were little. Truly, the most important role is being a mom, but I also recognize as long as they have a very invested caregiver, which we were lucky to have, I had a feeling they would need me more as they age, and that’s been the truth,” Dr. Hauser said.

As evidenced by Drs. Chosa and Hauser, maintaining a healthy work-life balance requires a lot of stamina, flexibility, and support from family and colleagues. But not every veterinarian has all these things. For them, the road can be much harder.

Dr. Stacy Pritt (WSU ‘97), alternate delegate for the American Society of Laboratory Animal Practitioners in the AVMA House of Delegates, has coordinated gender and generational issues programing at previous AVMA conventions, which she notes has always been well-attended, typically by women and recent graduates.

Dr. Pritt said veterinarians in private practice will often tell her they are frustrated because they’re not achieving their work-life balance. She says they don’t realize there may be another career pathway within veterinary medicine that would provide them with that balance.

“I see that as a stumbling block for vets, because so many have and continue to go into private practice, and they’ll say, ‘I keep applying to practice jobs, and I want all this,’ and I say, ‘Have you considered a nonprivate practice job?’ And they’re like, ‘It didn’t even enter into my thought process,’” she said. “I’ve seen article after article regarding work-life balance for private practitioners, and never once do they mention looking at a career pathway outside private practice.”

Dr. Pritt noted another complaint expressed by female veterinarians is the feeling that they can’t take time off to raise their children and successfully re-enter the profession.

An article and survey produced in 2005 by the Harvard Business Review and the Center for Work-Life Policy lend credence to this belief. The survey revealed that, while 37 percent of highly qualified women “off-ramp” for some period of time, 93 percent want to return to work. Yet, only 74 percent succeed in rejoining the workforce, and only 40 percent return to full-time jobs.

Dr. Pritt said she’s heard discussions about the need for conferences that would target continuing education for veterinarians who have left for a few years to raise children and now have decided to take up practice again and need to come up to speed on the latest developments quickly. These sessions have been compared with those offered to veterinarians who want to make transitions in their careers to another field of veterinary medicine.

“We’re going to start having to think along those lines to have a level playing field,” Dr. Pritt said.

“The problem is challenging and multifaceted. In general, our committee tends to come to the conclusion that one of the biggest things the AVMA and MSC can do for new parents is to try and make life simpler for them,” he said.

The committee has encouraged the AVMA to shorten council terms from six years to three. On the committee’s recommendation, the AVMA added a reduced-dues category for those who leave the profession for a short time because of family obligations. The MSC wellness subcommittee has scheduled work-life balance talks at previous AVMA conventions.

“We certainly hope to develop more resources on this front,” she said. “

The 2011 Class of AVMA Future Leaders has developed a work-life balance reading list, available at www.avma.org/ProfessionalDevelopment/Personal/Pages/Reading-Work-Life-Balance.aspx.