By Katie Burns and Malinda Larkin 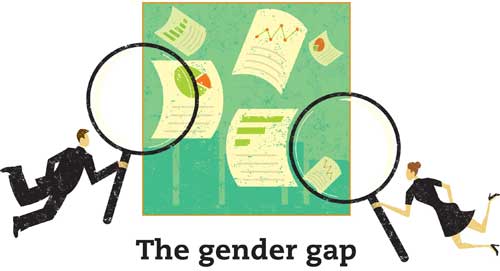 Veterinarians and researchers say factors contributing to this income disparity could include the broader societal context, women’s approach to business and family, issues with pay negotiations, and the career choices of female veterinarians.

It’s important to remember that veterinary medicine is not unique when it comes to the gender gap in pay, said Dr. Stacy Pritt, laboratory animal veterinarian and former chair of the board of directors for the Association of Women Veterinarians Foundation. She said the pay gap extends to most professions in the United States.

A related concern is that salaries in veterinary medicine could drop as the profession becomes feminized.

“I have certainly encountered that when I talk to people about studies and pay,” Dr. Pritt said.

“We’re just following what everyone else is doing,” Dr. Pritt said. “We can accept it or give veterinarians the skill sets to deal with it.”

She and others have advocated for more business and finance education for veterinarians. Dr. Pritt also wants to see more discussions on the differences in approaches men and women take to business, finance, and management; how those differences are perceived; and what the outcomes of those different approaches are. She would like to see veterinary leaders analyze how other professions are dealing with the gender pay gap.

Business savvy as well as family matters are among the factors that impact the long-term income of female veterinarians, said Dr. Kate Knutson, president of the American Animal Hospital Association and co-owner of Pet Crossing Animal Hospital & Dental Clinic outside Minneapolis.

“Veterinarians are not trained in business,” she said. “Loving animals and providing medical care is a separate mindset than running a profitable business.”

Dr. Knutson decided to become a practice owner because she wanted to determine the culture of her hospital, not because she had a beautiful business plan. Now, she talks with veterinary students about how the money has to come from somewhere.

As for family, Dr. Knutson chose not to have children, because she did not see enough time in the day for herself also to own a practice.

“If you want to have a family, you need to invest the time into it to make it a functioning unit,” she said. “A lot of people do it very well.”

The 1996 graduate said many of her female classmates dropped out of veterinary medicine to raise children, and some are returning now. She sees many female veterinarians working part time while raising children.

Dr. Knutson thinks fewer of the female veterinarians graduating now, with higher student debt, will be able to afford the loss of income that accompanies such approaches.

One might think a solution to the gender pay gap would be to encourage female associates to hone their negotiation strategies, but not everyone agrees.

Anne E. Lincoln, PhD, is an associate professor of sociology at Southern Methodist University whose research has focused on attraction, retention, and attrition in science careers.

She says this line of thinking “places the burden more squarely on the victim than the person who has power in the relationship. You walk into a job interview, the person hiring you has more power in the situation, so you’re at a power disadvantage.”

Dr. Lincoln continued, “It really affects women more because women who ask for raises and negotiate are viewed as pushier than men. Negative characteristics are ascribed to women who negotiate, who stand up for themselves and do anything a man would do to secure a higher salary. Many women choose not to negotiate because of stereotypes that they’re not fulfilling normal gender roles.”

Telling women to negotiate more also absolves the employer of any responsibility in the process, she said. Further, if that person is offering a lower salary to a woman to begin with, that’s not fair (see the bottom of this page).

“The practice owner could be saying, ‘I need to keep my costs low,’ but it has a larger cumulative effect,” Dr. Lincoln said.

“Employers are contributing to this. Any discussion of rectifying the problem for your field or mine needs to address both sides of the equation.”

The 2013 AVMA Report on Veterinary Compensation found that, in private practice, personal gross revenue was generally lower for female associates and owners than for their male counterparts. The causes could be manifold, Dr. Felsted said.

Like others, she believes female veterinarians tend to earn less than male veterinarians do over the course of a career because of career choices such as working fewer hours or fewer years to care for children or parents.

“I’m not sure we want to say that everybody should have to pick the same life course that means spending more time at the office or practicing in a certain way,” Dr. Felsted said.

Dr. Ann Dwyer, president of the American Association of Equine Practitioners and co-owner of Genesee Valley Equine Clinic in Scottsville, N.Y., also points to productivity as being key to income.

As a member of a veterinary management group, Dr. Dwyer sees numbers indicating that male veterinarians tend to produce more revenue than female veterinarians. She suspects causes include pricing, time per case, and work hours.

Dr. Dwyer said she respects women who work fewer hours by choice or necessity. She has cut back on her own hours on various occasions to recover from injury, care for her parents, and serve with the AAEP. She observed that many younger men also are choosing to work fewer hours.

“I’ve seen enough veterinarians over the course of my career to think all of us have really equal capabilities of becoming really great veterinarians—whether it’s great in terms of our clinical skills, our communication skills, our income production,” Dr. Dwyer said. “We’ve all got it; we just have to figure out how to use it. And yet, we all have to make our choices for how we want our lives to be.”

Anne E. Lincoln, PhD, an associate professor of sociology at Southern Methodist University, pointed to a study, “Science faculty’s subtle gender biases favor male students,” that appeared last year in the Proceedings of the National Academy of Sciences (PNAS 2012;109(41):16474-16479) as an example of how employers devalue women’s work.

In a randomized double-blind study, science faculty from research-intensive universities rated the application materials of a fictitious student—who was randomly assigned either a male or female name—for a laboratory manager position. According to the study, faculty participants—both male and female—rated the male applicant as significantly more competent and hireable than the identical female applicant. These participants also selected a higher starting salary and offered more career mentoring to the male applicant.

“The woman, even though it was the same exact resume, was viewed very differently. The only thing she was rated better at than the man was that she was more likeable. It was so absurd, and this study was done just last year. So we’re talking about these long-held beliefs about appropriate behaviors for the genders and appropriate remuneration by gender,” Dr. Lincoln said.