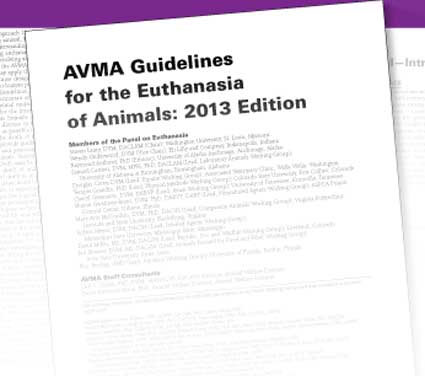 The AVMA is providing expanded guidance on the process of euthanasia, considerations for euthanizing animals, and the application of specific euthanasia methods in various species.

The 2013 edition of the AVMA Guidelines for the Euthanasia of Animals was scheduled to be available by early March at www.avma.org. The 100-plus–page document includes sections on species and species groups; expanded technical information on euthanasia methods; guidance on minimizing stress on animals, clients, and those who perform euthanasia; and advice on actions before and after euthanasia.

As new research is conducted and more practical experience gained, recommended methods of euthanasia may change. As such, the AVMA and (Panel on Euthanasia) have made a commitment to ensure the Guidelines reflect an expectation and paradigm of continuous improvement that is consistent with the obligations of the Veterinarian’s Oath. As for other editions of the document, modifications of previous recommendations are also informed by continued professional and public sensitivity to the ethical care of animals.

2013 edition of the AVMA Guidelines for the Euthanasia of Animals

Dr. Steven L. Leary of Washington University in St. Louis has been chair of the AVMA Panel on Euthanasia since deliberations began on the current edition of the guidelines in 2009. He said the panel intends for this edition to help with the process of administering euthanasia to animals ranging from “spiders to whales.” Panel members decided to provide direction for a wider range of species in this edition, he said.

Dr. Gail C. Golab, director of the AVMA Animal Welfare Division, said the panel members decided to address process concerns largely in response to questions from veterinarians and others.

Although the document has expanded from the 39-page edition issued in 2007, Dr. Leary expects that an index and appendix will help veterinarians quickly navigate the 2013 edition.

The guidelines’ preface notes that attention to animal treatment and welfare has increased substantially in the 50 years since the publication of the first report of the AVMA Panel on Euthanasia, as evidenced by the growing number of studies and extent of policymaking related to animal welfare science and ethics. In creating the 2013 AVMA Guidelines for the Euthanasia of Animals, the panel—also called the POE in the report—tried to apply the best available research and related information.

“As new research is conducted and more practical experience gained, recommended methods of euthanasia may change,” the report states. “As such, the AVMA and POE have made a commitment to ensure the Guidelines reflect an expectation and paradigm of continuous improvement that is consistent with the obligations of the Veterinarian’s Oath.

“As for other editions of the document, modifications of previous recommendations are also informed by continued professional and public sensitivity to the ethical care of animals.”

The guide includes additional technical guidance to help ensure, for example, that a firearm used to euthanize livestock will have the needed muzzle energy to cause a humane death or that a veterinarian euthanizing a finfish through immersion uses an appropriate agent at the correct concentration for a sufficient immersion time.

The new guidelines have also incorporated considerations for people who perform euthanasia, especially for those who could experience emotional or physical fatigue after administering euthanasia to many animals, Dr. Golab said, because performance can suffer and animal welfare can decline in such situations.

“If blunt-force trauma is done correctly, it can actually be among the most humane of methods performed,” she said.

But it can have negative effects on operators, and the public is increasingly opposed to it, so the panel recommended that those who use it look for alternatives.

Dr. Leary noted that the panel had input from more than 60 people with expertise in particular techniques or species, and during the panel’s deliberations, many of those individuals consulted with additional experts.

In choosing the members of the panel, the AVMA had sought volunteers with a mix of technical expertise and practical experience across a broad range of animal species, Dr. Golab said. Volunteers on the panel and its working groups as well as AVMA staff committed hundreds of hours to working on the document.

“We tried to make sure we had folks who were very technically savvy in terms of the techniques sections, and we tried to make sure that we brought in people—particularly for the species sections—who were actually doing this out in the field and could be realistic about when it was possible to match theory to application,” she said.

For example, carbon dioxide or carbon monoxide can be used humanely for euthanasia of companion animals in animal control situations, but only if those using the method are well-trained and well-equipped. Meeting those standards with limited resources can be challenging, however.

Therefore, the panel described specific conditions that need to be met for the use of inhaled gases to be considered acceptable and recommended alternatives with fewer conditions and disadvantages for routine euthanasia.

Importantly, the 2013 edition of the guidelines does not address techniques used for slaughter or depopulation. Dr. Leary noted that those subjects involve substantial additional considerations that will be addressed later, in separate reports.

The guidelines’ impact on animal welfare and their use in enforcing welfare-related laws and informing decisions in and beyond the U.S. imposed a sense of responsibility on the panel, Dr. Golab said.

While the panel is giving advice, veterinarians who make recommendations on euthanasia techniques must use their professional judgment, and anyone performing euthanasia has ultimate responsibility to do so appropriately, Dr. Golab said.

The first edition of the guidelines, the Report of the AVMA Panel on Euthanasia, was published in the Jan. 15, 1963, edition of JAVMA. The five panelists who developed the report relied on their own training and knowledge of the literature, and they visited locations where unwanted or fatally diseased animals were euthanized. The panel focused on dogs and cats and, at that time, considered ethical considerations to be beyond the scope of its activities.

“The first criteria of evaluation in this study were effectiveness and rapidity of action in producing quiet, painless death,” the 1963 report states. “Beyond these considerations the esthetic effect, cost, and reliability of the technique received consideration.”