By May 1884, the damage from cattle “lung plague” helped push Congress to create a federal bureau to control and eradicate animal diseases.

The Department of Agriculture’s new Bureau of Animal Industry, under the leadership of Dr. Daniel E. Salmon, eradicated the disease, contagious bovine pleuropneumonia, in a little more than eight years.

Dr. Salmon, who earned the first doctorate in veterinary medicine awarded in the U.S., was the bureau’s chief during its first 21 years. Under his leadership, the agency also studied and controlled Texas cattle fever; started federal import and export inspections for animals and ships, “thus doing away with the cruel treatment and suffering which had been a startling feature of this traffic”; improved import inspections and quarantines; and investigated human diseases that came from livestock, all this according to his obituary in the American Veterinary Review—the predecessor to JAVMA—following his death in August 1914.

He also served a term as president of the AVMA. Cornell University and the National Association of Federal Veterinarians give awards in his name. Dr. Michael Gilsdorf, executive vice president of the NAFV, said his organization’s award honors Dr. Salmon and the excellent performances and contributions of current federal employees. He said Dr. Salmon had a profound impact on human and animal health.

Even before he became bureau chief, Dr. Salmon promoted the germ theory of disease, and he detailed experiments that proved that multiplying microorganisms caused fowl cholera.

Yet, Dr. Salmon also resigned from the agency he helped establish because of an investigation into his partnership in a company that received an agency contract to make meat inspection labels. He spent subsequent years helping form a veterinary school in South America.

Daniel Elmer Salmon, born in July 1850 in Mount Olive, N.J., was an orphan by age 8, according to information from Cornell. After his father died in 1851 and his mother in 1859, he was raised by his second cousin. 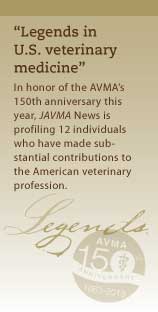 Early in his life, he worked on a farm and as a clerk in a country store. He entered Cornell University’s first veterinary class in 1868, earning his Bachelor of Veterinary Science degree in 1872 and his doctorate in veterinary medicine in 1876. His academic work involved clinical study in France.

He opened a clinical practice in Newark, N.J., but left in 1877 to deliver a series of veterinary science lectures at the University of Georgia.

Dr. Salmon worked to stamp out contagious pleuropneumonia as a state employee in New York during 1879, the year after England began restricting importation of American cattle because of the disease. The USDA’s 1942 book “Diseases of Cattle” stated that typically, about 40 percent of cattle exposed to pleuropneumonia contracted the disease, and about half those cases were fatal.

After his work in New York, Dr. Salmon accepted a USDA appointment to investigate animal diseases in the Southern states, particularly Texas cattle fever. He also worked to identify the causes, nature, and control methods for fowl cholera, contagious diseases of swine, and nodular disease of sheep.

When the Bureau of Animal Industry was formed, Dr. Salmon built it to focus on research, pathology, and bacteriology, according to a May 2009 article in Veterinary Heritage. For example, he and Theobald Smith, MD, showed that sterilized cultures of dead bacteria can confer immunity, and his subordinates improved the understanding of Texas fever and its spread and showed that ticks were able to transmit the disease.

While the genus Salmonella is named after Dr. Salmon, it was Dr. Smith who identified the first bacteria in the genus and thought they were the cause of hog cholera, according to a December 2008 article in Emerging Infectious Diseases. Later, the disease was shown to be caused by a viral infection.

Dr. Salmon also founded the National Veterinary College in Washington, D.C., in 1892 and was its dean until 1898, the year it suspended operations. The college trained veterinarians to serve as meat inspectors and researchers, and it reopened from 1908 through 1918.

Dr. Salmon noted in a speech during the meeting that progress in the study of animal diseases had remarkable influence on human medicine, including the areas of contagion, disinfection, aseptic surgery, vaccines, and antitoxins. But he said much about animal diseases remained unknown, and efforts were needed to protect the public and animals.

“Individuals will come and go, but, as an association, the illimitable future is yours,” Dr. Salmon said. “There is no task so great, no achievement so distant, that its prospects need discourage you.”

In a memorial address on Dr. Salmon, Dr. W. Horace Hoskins of the University of Pennsylvania said in September 1914 that Dr. Salmon had enriched those working in animal agriculture and industry beyond computation and “laid every man, woman and child of our land under a debt for his conservation of their health through a guarded animal food supply.”

Dr. Hoskins, who was AVMA president from 1893-1896, noted that scandal ended Dr. Salmon’s leadership of the Bureau of Animal Industry.

“He likewise drank of the cup of bitterness of a country’s ingratitude, through the arbitrary power of one of its chief rulers,” Dr. Hoskins said.

By summer 1906, Dr. Salmon began working in South America as head of the veterinary school at the University of the Republic in Montevideo, Uruguay, where he organized the veterinary department and led it for five years.

In the year before his death, Dr. Salmon was in charge of a factory producing serum used to combat hog cholera. He was age 64 when pneumonia “cut short the career of this good and gifted man,” an American Veterinary Review editorial stated.

“The American veterinary profession lost one of its most brilliant members, and the Review a valued and highly esteemed collaborator,” the editorial stated.