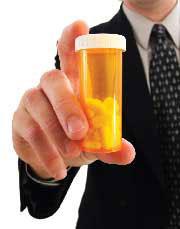 Two appellate court judges ruled in December 2012 that a pharmaceutical salesman’s conviction for conspiring to sell prescription drugs for off-label uses violated his speech protections under the First Amendment.

A third judge wrote in a dissenting opinion that the ruling “calls into question the very foundations of our century-old system of drug regulation” and would let such pharmaceutical company representatives make any prescription drug claims not yet proved to be false or misleading.

The ruling vacated a conviction against Alfred Caronia, a pharmaceutical company salesman who had been convicted in October 2008 of a misdemeanor charge of conspiring to introduce a misbranded drug into commerce. He was sentenced to one year of probation and 100 hours of community service.

Orphan Medical Inc., now Jazz Pharmaceutical, hired Caronia in March 2005 to promote Xyrem (sodium oxybate), a controlled substance and CNS depressant approved for use in human medicine to treat two conditions connected with narcolepsy, court documents state. That fall, federal government agents investigating off-label promotion of the drug recorded statements made by Caronia to a physician about unapproved uses, including statements that Xyrem can be used to treat patients younger than 16 and to treat those with fibromyalgia, periodic leg movement, and Parkinson’s disease.

The U.S. Attorney’s Office could petition the appellate court for a rehearing by the 13 active judges on the 2nd Circuit, according to Thomas F. Liotti, whose law firm represented Caronia. The government also could ask the Supreme Court to consider the case if the 2nd Circuit judges deny the rehearing petition or deliver another judgment unfavorable to the government.

Liotti and his client are satisfied with the current decision, but he knows of lawyers in the pharmaceutical industry who would rather that the case be considered by the Supreme Court, which could deliver a ruling that would apply across the country. The 2nd Circuit includes Connecticut, New York, and Vermont. Liotti also expressed concern that the government could interpret the ruling to apply only to criminal cases and not civil ones.

Robert Nardoza, a spokesman for the U.S. Attorney’s Office for the Eastern District of New York, said the office is reviewing the court decision and considering its options. He declined to answer a question about the potential impact of the case.

If the government’s objective is to shepherd physicians to prescribe drugs only on-label, criminalizing manufacturer promotion of off-label use while permitting others to promote such use to physicians is an indirect and questionably effective means to achieve that goal.

Liotti expects pharmaceutical companies are delighted by the ruling, which they think will let them market their drugs off-label to any person.

“As long as they qualify what they’re saying and they say that a drug is prescribed or approved for a certain purpose, ’but there are these other scientific studies and there’s this other information out there,’ they’re at liberty to do that,” Liotti said.

The newly opened market makes the lawsuit a “billion-dollar case,” he said.

The U.S. Attorney’s Office for the Eastern District of New York announced in July 2007 that Jazz Pharmaceuticals had agreed to pay $20 million to settle criminal and civil cases connected with the same investigation that led to charges against Caronia.

Allegations connected with off-label marketing have been far more costly to other companies in recent years. Settlements and judgments delivered in 2012 alone will together cost billions of dollars for companies including Abbott Laboratories, GlaxoSmithKline, and Merck Sharp & Dohme.

U.S. circuit judges Reena Raggi and Denny Chin noted in the majority opinion written by Chin that off-label drug use is allowed under the Food, Drug, and Cosmetic Act and that the FDA and courts have recognized the “propriety and potential public value” of such uses. The law defines misbranding on the basis of whether a drug is adequately labeled for its intended use, and the FDA can look to drug company promotional statements to prove how the company intends that customers use drug products.

Court documents indicate the government’s interpretation of the FDCA allows physicians, academics, and medical journals to talk about or publish information on off-label uses but forbids pharmaceutical companies from doing so. The majority opinion states that prohibiting only pharmaceutical company employees from promoting off-label drug uses does not help preserve the efficacy and integrity of the FDA drug approval process or reduce patient exposure to unsafe and ineffective drugs. But it does prevent physicians and patients from receiving treatment information.

“If the government’s objective is to shepherd physicians to prescribe drugs only on-label, criminalizing manufacturer promotion of off-label use while permitting others to promote such use to physicians is an indirect and questionably effective means to achieve that goal,” the majority opinion states. “Thus, the government’s construction of the FDCA’s misbranding provisions does not directly advance its interest in reducing patient exposure to off-label drugs or in preserving the efficacy of the FDA drug approval process because the off-label use of such drugs continues to be generally lawful.”

In her dissenting opinion, U.S. circuit Judge Debra Ann Livingston said Caronia was convicted of conspiring to sell a prescription drug for use outside its labeling, and his intent was revealed through his speech.

She noted that the district court explained to jurors what constituted conspiracy and misbranding. The First Amendment never prohibited the government from using speech as evidence of motive or intent, she said.

If drug manufacturers were allowed to promote FDA-approved drugs for non-approved uses, they would have little incentive to seek FDA approval for those uses.

Livingston further wrote that a drug is considered to be misbranded if its labeling lacks adequate directions for layperson use, and Xyrem’s labeling did not include any uses outside of treatment of excessive daytime sleepiness and cataplexy in patients with narcolepsy. Caronia’s trial focused on whether he, his employer, and others agreed that Xyrem would be distributed for off-label use.

The government has other means to address concerns about misleading off-label promotion or evasion of the drug approval process, the majority opinion states. Those include warning and disclaimer systems, required lists of intended indications with drug approval applications, caps on off-label prescriptions, liability reminders regarding off-label use, and prohibitions on some off-label uses. The FDA also remains able to regulate prescription drug marketing.

“We conclude simply that the government cannot prosecute pharmaceutical manufacturers and their representatives under the FDCA for speech promoting the lawful, off-label use of an FDA-approved drug,” it states.

Referring to the 1944 film “Arsenic and Old Lace,” Livingston said there may be no law forbidding arsenic consumption, “But this would not endow Abby and Martha with a First Amendment right to offer arsenic-laced wine to lonely old bachelors with the intent that they drink it.” Statements suggesting those women’s intent, including truthful statements, “would not be barred from evidence by the First Amendment.”

Livingston noted that the prohibition on off-label marketing is intended to make drug manufacturers conduct clinical investigations and provide evidence that a drug will have its purported effects, a central feature of the Food, Drug, and Cosmetic Act.

“If drug manufacturers were allowed to promote FDA-approved drugs for non-approved uses, they would have little incentive to seek FDA approval for those uses,” Livingston wrote.

Instead, she wrote that the majority opinion would allow any substance sold for some purpose to be promoted by its manufacturer for any purpose so long as the manufacturer’s statements “are merely unsubstantiated, rather than demonstrably false or misleading.”