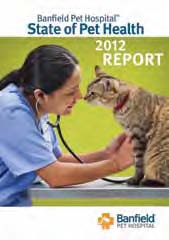 The report drew on medical data from 2 million dogs and nearly 430,000 cats that were patients at Banfield’s 800 hospitals in 2011. This is the second year Banfield has issued such a report. The 2012 report focuses on chronic diseases, including obesity, arthritis, kidney disease, thyroid disease, and heart disease.

Banfield worked with Kelton Research to survey 2,000 dog and cat owners about their perceptions regarding chronic diseases and steps they can take to keep their pets healthy. Respondents selected from a list of reasons they would be likely to take their dog or cat to a veterinarian. Management of an existing condition did not rank high among the responses (see sidebar).

“At Banfield, we strongly believe in regular preventive care and early disease diagnosis. The key to successful early disease diagnosis involves a partnership between pet owners and their veterinarian to identify changes in a pet’s overall health and behavior,” said Dr. Jeffrey Klausner, Banfield’s senior vice president and chief medical officer. “In partnership with pet owners, we hope to reduce the number of pets living with undiagnosed or unmanaged chronic diseases.”

The prevalence of chronic kidney disease in cats increased by 15 percent between 2007 and 2011, according to the report. In 2011, one in 12 geriatric cats had a diagnosis of kidney disease.

The AVMA and Banfield are among the founders of the Partnership for Preventive Pet Healthcare. Dr. DeHaven noted the primary reason for formation of the partnership was to help veterinarians understand and communicate the importance of regular preventive care for pets.

The State of Pet Health 2012 Report is available at www.stateofpethealth.com.

Reasons for visiting a veterinarian

Responding to a survey by Banfield Pet Hospital and Kelton Research, dog and cat owners selected from a list of reasons they would be likely to take their pet to a veterinarian. Here is the ranking of the responses: